The Risk We Take When We Compare Each Other's Disabilities

I grew up across the street from what I deemed my “second family.” My family had five girls; their family had three girls. We were never at a loss for baby dolls, Barbies and tea cups. I practically lived at their house — when they weren’t living at mine.

Even though I was only 4, I remember the first time I met them. Of course, as I’ve aged and my memory has been inundated with Spongebob’s cackle, Dora’s Spanish lessons and teeny-bopper-show laugh tracks, I don’t recall all the details of that first meeting. Long forgotten are specifics like what the girls were wearing, if they’d lost any baby teeth yet, if they were nice, shy or funny, but, one memory still engrained in my aging brain is the image of their father. Yes, after all these years, my brain can still see him on the wooden porch smiling and sitting… in his wheelchair.

Although I’d been raised properly and told not to stare at people’s differences, I’m sure I did. It was the first time I’d ever seen anyone missing limbs and in a wheelchair, and like most children, I didn’t do everything I was told. (Sadly, even though adults know better, sometimes they don’t do as they’re told either. And sometimes their words, their actions hurt.)

My neighbor was a war hero who lost both legs in Vietnam. Even as a child, it didn’t take me long to realize there was so much more to him than his wheelchair. His disability paled in comparison to his abilities.

Perhaps that experience at such an early age taught me to look past my son’s autism, past his disability and see him. Trust me, I’m perfectly aware an autism diagnosis, a pervasive developmental disorder, is not the same as a physical disability. That’s like comparing apples to oranges, but, believe it or not, some folks like to compare. They can’t tell the difference between an apple and an orange, or at least they don’t care enough to look past the labels and see anything other than two round fruits. So, before you start blasting me about comparing my neighbor’s struggles to my son’s struggles and telling me “that’s like comparing apples to oranges,” well, you’re preaching to the choir. Unfortunately, not everyone is sitting in the choir with me.

Not long ago, when I was discussing Ryan’s autism and a particularly bad day he recently experienced, someone said to me, “I don’t really feel sorry for Ryan. At least he’s not in a wheelchair.” Wow.

I was initially dumbfounded and mumbled something like, “You can’t even compare the two.” Looking back, I wish I would have had an apple or an orange (wouldn’t have mattered at all) to shove in that person’s mouth. I wish I would have said all of this…

First and foremost, Ryan doesn’t want anyone’s sympathy or pity. Most days he’s happy in his own skin. Second, just because Ryan’s disability isn’t visible, just because you don’t see it, doesn’t mean it doesn’t exist. This invisible disability doesn’t make Ryan’s difficult times any easier or his heartache any less just because you can’t see it. And third, there would be no need to feel sorry him even if he was in a wheelchair.

Yes, Ryan can easily jump up and sprint down our stairs (he actually sort of crashes down the stairs), without any special accommodations in our home, when it’s time for a few Vanilla Oreos. However, he needs accommodations when it comes to learning at school because although he “looks fine,” his brain processes information differently.

Ryan has two perfectly working legs that can walk, run and jump. He’s strong and more than capable of running away from the bully in the school yard. Yet, when Ryan was being bullied for two years, he was unable to find the words to tell me, due to his language deficits.

Although Ryan could physically run up to a group of friends on the playground and say, “Hey guys, want to play some basketball?” he doesn’t, and chances are pretty high that he won’t. Communicating with friends and initiating a conversation is difficult due to the way autism impacts his social skills and his social awareness.

Even though Ryan’s strong enough to knock over several defensive lineman and could physically become an outstanding football star, he won’t. The pads, the equipment, the shouting and even the grass are too much for his overloaded sensory system to handle.

Yes, autism does make some things more difficult for Ryan, but, there are so many more things that come quite easily to him. I know that, Ryan knows that, and we’re both incredibly grateful. We both recognize there are others who have different struggles than Ryan. We don’t compare apples to oranges.

An autism diagnosis may be a disability that you can’t see, but, for Ryan, that’s OK because just like anyone with any type of disability, be it an apple or an orange, Ryan wants you to accept him, to see him and to see his abilities and not his disability.

Yes, sadly, sometimes even adults don’t know better and say ignorant and hurtful things. I’m sure just like Ryan, my neighbor had heard his fair share over the years.

And although my neighbor may have spent the past 45 years with a disability which required a wheelchair, that didn’t keep him from living. He may have gone through most of his adult life unable to stand on his own, but his abilities, his successes and his happiness stand for themselves. The proof lies in the faces of his beautiful children, grandchildren and great grandchild.

When it comes to disabilities, comparing one disability to another is truly comparing apples to oranges. An apple is an apple. An orange is an orange. If all you ever concern yourself with is what those fruits are labeled and how they look on the outside without bothering to take the time to see what’s on the inside, then you will miss the incomparable essence of them both. 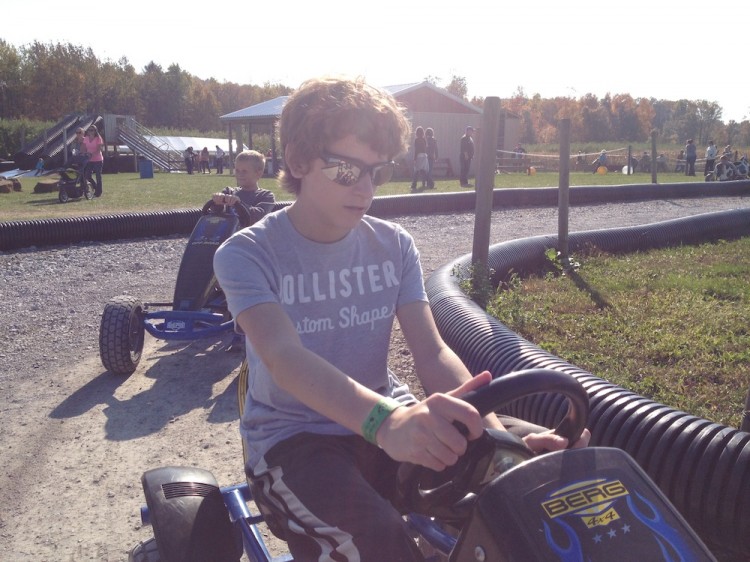 Read more from this blogger on The AWEnesty of Autism.

The Mighty is asking the following: Describe a moment you were met with negativity or adversity related to your disability and/or disease (or a loved one’s) and why you were proud of your response — or how you wish you could’ve responded. If you’d like to participate, please send a blog post to community@themighty.com. Please include a photo for the piece, a photo of yourself and 1-2 sentence bio. Check out our “Share Your Story” page for more about our submission guidelines.