When Family and Friends Suggested That I Might Be Autistic

Being born in the late ’80s in a small town, my parents and I never really knew much about autism. It wasn’t talked about and wasn’t often diagnosed until the late 90s to early 00s.

I always knew I was different, and growing up, kids around me knew I was different. I had always struggled with social interaction and often mimicked others around me. In 6th grade I remember reading a book called “How to Be Popular in Sixth Grade” and I underlined and studied the book as if it was going to give me all the secrets I needed for social interaction. Needless to say, it only got me teased. But I was never diagnosed autistic as a child, mostly because I had a heart condition that took precedence. So my awkwardness was passed off as just being a “weird girl.”

As I got older, I masked the best I could. I tried to mimic other girls around me and learned everything I could from my favorite TV shows and movies. I thought it was normal. At the very least, I thought I might’ve had depression and anxiety at times due to other health issues.

It wasn’t until I was in my early 20s and I first met my husband and his family that autism ever came up. When I first met my husband, I was only 20. Whenever we would go anywhere, I would follow him from room to room, not knowing what to do with myself in unfamiliar places. After spending some time with him and his parents, his mom who works with adults with disabilities suggested that maybe I was autistic. My husband agreed as well, but 10 years ago it wasn’t common for girls to be diagnosed with autism, let alone adult women. There was still a stigma that boys were the ones who were autistic. 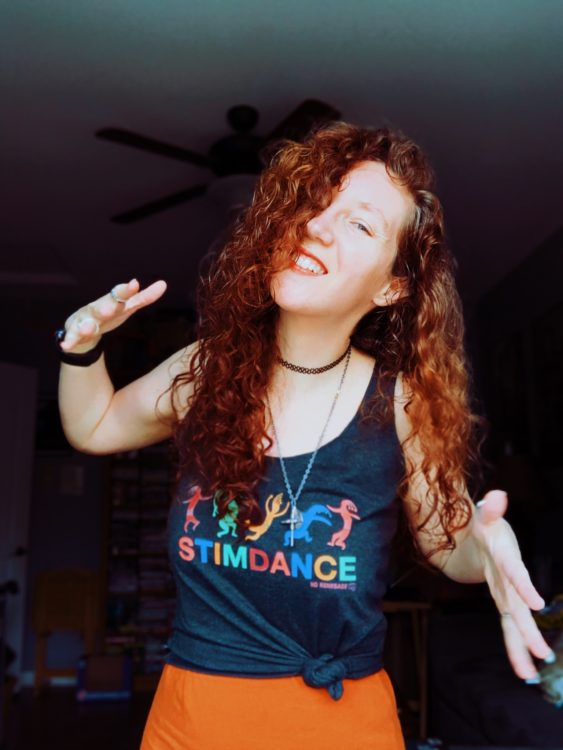 At first, I didn’t think much about being autistic. I remember joking and saying something to one of my coworkers, and to my surprise, she told me she thought I was autistic. She had been working with me in retail for the past three years and said, “You are great at your job, you get sales, you work really hard, but you also have this very stringent way you look at things and you don’t always do well with adapting to change. You’re great with the scripts that you tell the customers, but it can be robotic.”

At first, I didn’t know how to take the information. It was the first job I had while I was in college. I thought I was doing everything by the book. I knew I was a good employee. I got Employee of the Quarter. But I knew I was struggling, just like my coworker said. I hated it when they changed my schedule last minute. I would even cry and have breakdowns at home before I would go to work. I had set scripts I would say to customers about everything. Sometimes, I would write them down on a notepad so I could remember them. There were so many tells that I was struggling working as an undiagnosed autistic in a retail environment and I didn’t even know it.

About a year passed and I changed jobs and started to work for the same company as my mother-in-law and husband, working with adults with disabilities as a job coach. After some time working with several clients that were autistic, I realized how much I related to their behaviors and understood why meltdowns would happen. I seemed to work better with some of the autistic clients than other job coaches.

During my time working with adults with disabilities, I started to do my own research on autism. One of the things that I remember reading was how some autistics think. I started to ask other people, did they process their thoughts in words or pictures? Everyone said words. I explained to my husband that I always thought in pictures. In fact, I sometimes had trouble processing language because I had to, what I call, convert my pictures to words. I thought everyone did this; at least I didn’t realize it was so odd not to think in words. I continued my research. There were a couple of amazing writers back then whose research and writings really helped me continue on my journey.

I was self-diagnosed for about eight years before I finally was diagnosed a year ago. Even though I wasn’t diagnosed until last year, I’m thankful that I had others around me who were accepting and noticed that I was autistic even before I did. It truly helped me get through my 20s. I’m not sure if I would’ve been as bold to research and seek a diagnosis if others around me hadn’t told me to. I’ve come far from that awkward kid worried about being popular in sixth grade. Now, I’m a proud autism advocate and writer.

Did friends and family ever suggest you might be on the spectrum?

Amelia Blackwater is a chronic illness and mental health writer and poet. She graduated from CSUSB with a BA in Creative Writing in 2011. She finds therapy in writing about her experiences living with CHD, migraines, multiple mental health problems including C-PTSD, Anxiety Disorder, OCD, and recovered Eating Disorder She recently is on the mend from her third open heart surgery. Follow her journey on Instagram @ameliablackwater