When the Kid With Autism Is the Older Brother

I knew this one was coming. But now that it’s here, I’m stumped.

My boys are 17 months apart — TJ, who has autism, is 15 years old to Peter’s 13. Up until recently they’ve been pretty close to each other in terms of their emotional ages.

Peter has always been aware of TJ’s autism and as a result, has typically taken the lead. He would decide what they would play and how they would play it, and TJ would usually follow with little to no complaints.

But things are changing. And it’s not just the hormones (theirs, not mine).

TJ’s fuse has been incredibly short lately. This is not unusual for the summertime, as his daily structure is kaput. He finds such comfort in his structure that when that structure is gone, he’s much more sensitive and raw and this close to a meltdown more often than not. These past few days, Peter hardly has to say anything to TJ for him to blow up. What’s new about this situation is TJ’s ability to verbalize his reason for the recent blowups: “Peter treats me like I’m the little brother. And I’m not.”

We knew this was coming. But now that it’s here, it’s not such an easy problem to solve.

Peter is used to being the leader. How do we remind him that TJ is, indeed, the older sibling when TJ requires so much more effort to accomplish the simple things Peter can do? Things like walking home from school alone, or talking to a cashier at a store, or even washing his face, require so much practice for TJ to be successful. It’s only natural that Peter feels like the older sibling.

How do we honor TJ’s rightful place as the older sibling when things are so much more difficult for him?

This is one of those tough issues that takes so much focus and planning on our parts, as their parents. Usually when TJ stumbles, I’m right there with a quick solution so we can all continue on our way.

This one has no quick solution.

So I, as their mom, have to remember this is hard for both of them. TJ wants validation as the older brother, and Peter wants respect for his abilities and strengths as the neuro-typical kid in our house.

Both positions matter. Both are big deals.

No quick fix exists. I’m dipping my toe into this new pond slowly and thoughtfully. I’m going to get messy and fall in and struggle because I’m not perfect. I’ve never tackled this one before.

But I do know that even though I will make mistakes, I’ll take this baby step by baby step, with each boys’ hearts and feelings in mind. I’ll do the best that I can. And as long as we can all sit down together and talk things through clearly and slowly, we will find our way.

So off we go — with huge love in our hearts for the boys they’ve been and for the young men they’re turning into. We go forward.

And I know eventually, we’ll get through this one just fine. 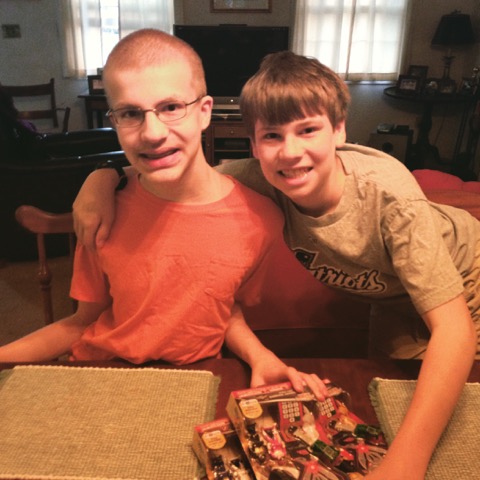 lauren-jordan
Want more of The Mighty?
You can find even more stories on our Home page. There, you’ll also find thoughts and questions by our community.
Take Me Home