How I Transformed My Scar Into Something Better

The big scar on my back is more than four years old now. It’s faded in places, and the surgeon did a nice job of tucking it next to my backbone, but parts of it are still very visible. Or rather, they were…

A couple of weeks ago I made one of those decisions that you appear to make very quickly, but you’ve actually been turning over in your head for a while. I decided to go out and get a tattoo to cover the scar.

I’m not talking in terms of a small tattoo either. A large red rose, with the head of it covering the nastiest part of the scar at the top, and the stalk covering a large part of the rest, with leaves at the side. The man said it would take two hours, and it was more like three and a half, and they want me back in the couple of days’ time to add a bit more detail.

The whole business of getting a tattoo was quite nerve-wracking. I am a middle-class, middle-aged English woman, and before the back pain became too much, I was a teacher. In general terms, we are not the kind of people who get tattoos. I have a tiny one on my lower back for many years, but that area of my body never appears in public, so this was in a whole different league. My nice country town turned out to have a tattoo place – I wasn’t sure if it would – and I went in prepared to run out at a moment’s notice if it all felt wrong.

They were great, however. They listened to what I wanted and looked at a picture I’d taken in, improved on it and drew out a stencil. Then they put it on my back. I liked it and sat down to be inked, then panicked and just had to have one last look in the mirror to be sure. I still liked it, and they got going.

The process was very peculiar. My spine has been through several sets of steroid injections and a horrible procedure called denervation, where they zapped some nerve endings with electricity in a totally unsuccessful attempt to numb them. Then in 2013 I had long metal rods put in it to fuse it together. My back has hurt ever since, and now one of the few unfused discs at the base has prolapsed as well; it’s in a sorry state. The needle hurt bits of my skin very much indeed, but other bits were totally numb, so the sensation came and went. It was very odd. As both the men working there were covered in tattoos, I did my best to keep the pain to
myself, as clearly they had been through it and more. I felt incredibly tough. (I’d taken my strongest painkillers, which was a bit of cheat really, but they didn’t need to know that.) 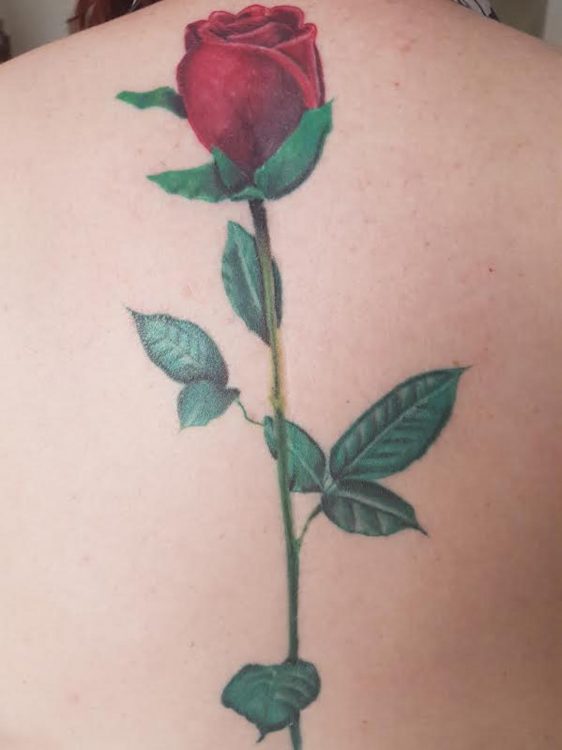 You can see it pictured and, whether or not you are keen on it, I think you’ll agree the main point is that I like it. So, thankfully, does my husband, who wasn’t quite sure about it in advance. I like how it looks, but I like what it represents even more. I feel that on suitable occasions I can show my back again, a part of my body I used to like before it began to hurt. I have had the courage to decide that I’d rather discuss a pretty rose than an ugly scar. Plus, if I can’t be a teacher any more thanks to the pain, I can at least express my freedom to have a tattoo. It might be fairly easy to cover up but I still don’t think I would have risked getting it if I were regularly in a classroom.

I can’t say I’m looking forward to getting it finished, or having the faff of it being covered in clingfilm for a couple of days afterwards, which is horribly hot and sweaty. But I am so pleased with it nonetheless. I didn’t have any say in getting the condition that led to the scar, but I have chosen what to do with what remains.

is a teacher who had to stop working in the classroom after kyphosis (think spine bending to the front) lead to severe chronic back pain, which sadly wasn't stopped by extensive fusion surgery. She is mother to two mostly lovely kids, wife to a very forbearing husband, and the owner of a cute but scruffy little dog. She lives in Sussex in the UK and is still doing some online teaching and being a school Governor.

gabbiejerrit
Want more of The Mighty?
You can find even more stories on our Home page. There, you’ll also find thoughts and questions by our community.
Take Me Home