Mila was diagnosed with Batten disease just before Christmas 2016. Holiday festivities were not on my mind, but at some point I remember gathering the strength to look for a few gifts for the kids. When I walked through the door of our local toy shop, I stopped and looked out across the sea of colorful dolls, stuffed animals, train sets, bouncy balls, kites, backpacks, and shelf after shelf of books. My lips pursed, shaking, and my eyes burned. I wanted to turn around and leave right away. I tried to take a few deep breaths to stop the tears from streaming down my cheeks. But it didn’t help.

I left my sunglasses on and walked over to the woman behind the counter. “Do you have any recommendations for toys for children who have a hard time seeing… actually, who can’t see?” I avoided using the word blind. She paused and thought. Then she asked, “For what age?” How do I respond to that? Mila is 6, but she couldn’t play with a toy created for most 6-year-olds. The woman showed me a small stuffed animal that made noises when you squeezed it, an iPad look-a-like with big colorful buttons that made loud noises mimicking the images above them, and a spiky teething toy to grab onto. She gravitated toward the baby section with toys to shake and rattle. I chose a few and a remote-control car for Azlan, my son, and checked out. Just before walking out the door, I stopped and turned around. Kids were running around the store, shaking boxes and leaning over books. Suddenly, this same store I had brought Mila to since she was a baby seemed like a different place to me. I felt like an outsider.

That day I decided I would try and help Mila reinvent the way she “saw” the world. Losing her vision was only one of her many battles, but it was one that seemed to deeply impact what she could and couldn’t do. I was heartbroken that Mila couldn’t see what was around her, but I also knew she could experience the world through her other senses which were working well. I closed my eyes and started to discover what brought me happiness when vision is gone. The sounds around me were louder; I analyzed them more. I craved movement and touch. So, I started there.

Shortly after, a kind stranger who read our story in the local paper offered Mila weekly piano lessons. The timing couldn’t have been better. Every Wednesday, we would knock on the apartment door and Mila would shake in excitement as soon as she heard Sarah’s voice. She knew what was coming. We would start by sitting on the floor while Sarah played Chopin and Beethoven. Mila would smile and her eyes would light up at the stimulating and soothing sounds of the classical music. Then we helped Mila to the piano and she would rub her hands over the keys, slowly pushing one finger down at a time and listening to the sounds she was making. “Big” Sarah would say in a high voice as she placed Mila’s hand on the white keys. “Small” she would say in a deep voice as she moved her fingers to the black keys. Then she would place her long fingers over Mila’s small hands and play “A, B, C, D, E, F, G…” I watched as Mila learned to rely on other senses to take in the world around her. The goal was not to learn to play the piano, but simply to learn that you can make music using your hands and to take in the beauty of music through your ears.

At home, I cleared out our playroom and filled it with large squishy blocks, beanbags, and oblong therapy balls. We hung a small platform swing just a few inches above the ground for Mila to climb onto. An old Pack ‘n Play was filled with plastic balls. Some days we would pretend the floor was lava and we would fly away on our swing to a magical land. Other days the blocks were castles. “Quick, we have to escape from the dragon!” I would say as I encouraged Mila to reach out to feel the foam steps in front of her. She would lift her knee up onto the block and pull her body up while Azlan dove headfirst into the beanbag. The kids would hide under the colorful balls in the pit and Azlan would bury stuffed animals for Mila to find with her hands. Together, we would climb and roll and swing and feel the world around us.

But how could I simulate movement when Mila’s walking was slow and calculated? Just as I was thinking of ideas, a kind woman offered Mila the gift of hippo therapy—a perfect opportunity to feel movement through the natural and soothing gait of a horse. Mila would be helped up onto the high back, only a blanket between her and the horse. The instructor would guide Mila’s little hand up onto Boo’s soft wintery coat, then ask her to say, “Go!” The horse would walk into the ring and Mila’s little white helmet would bob up and down to the rhythm of the gait. Mila’s smile would spread wide as she giggled in delight.

Today, I still close my eyes often and try to feel what it’s like to be in Mila’s world. Instead of the sadness I used to feel, I now feel the power of sound, touch, and movement. I still have much to learn and share with Mila, but my initial sadness has turned to opportunity. 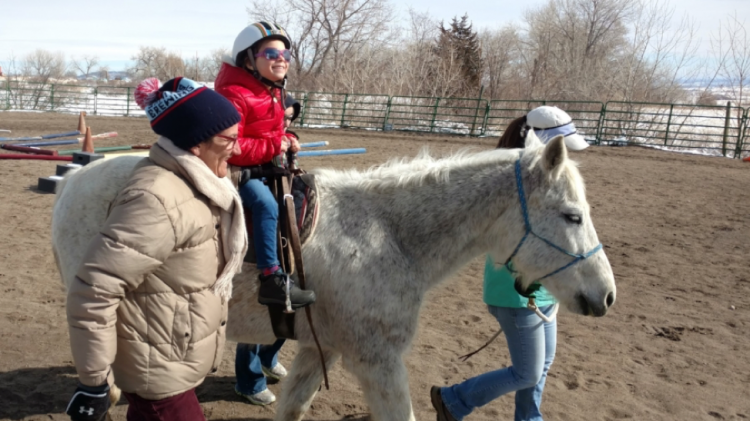 I'm the mother of a beautiful little girl named Mila, who was diagnosed with Batten disease. This rare and fatal disease is robbing Mila of her precious life & I am on a mission to save her with your help!