Mental Illness Allowed Me to Find My Gift -- My Messy Beautiful

A close family friend who I’ve known since I was a baby invited me to his parent’s house for a Jewish holiday meal one night in 2009, as he did whenever those special occasions roll around. I’m not Jewish, but they treat me like family, so it’s only natural to be at these events, surrounded by friends and loved ones and good food.

After dinner, Dave and I were chatting, catching up on what we both had going on. He described his plans of starting a nonprofit with a good friend of his to give back to the community. I remember my exact first reaction:

“Why on Earth would you want to start a business that doesn’t make you a profit?” Luckily, I didn’t say it aloud.

What I forgot in that moment was what Dave had been through. Early on in his life, he had everything going for him — top athlete, funny guy, made decent grades in school. But in college he got caught up with the new found freedom and after making some bad choices, he started doing drugs to self-medicate the pain away. Hard drugs. One night he almost died and so his parents found a treatment facility in California, and he went away to get help. He found his recovery path and stayed at the treatment center to become a counselor himself. His addiction led him to a place where he found his gift. And now he had come home and was ready to give his gift away to the world using his nonprofit as the vehicle through which to share it.

It would take five more years for me to understand this concept.

Growing up, I painted murals on the walls of my room and wrote in my journal, read poetry and spun dreams of becoming an artist. But when the time came in college to pick a major, I reached for the safe choice: Business, with a concentration in marketing. That way, I could graduate with a degree that would ensure I’d be able to get a job, while at the same time I’d be able to tap into my artistic side. Really, I was thinking more about money and my future and much less about longterm happiness and making a difference in the world.

I wasn’t following my heart, and my lack of follow-through made me envious of my girlfriends who entered the fields of teaching, nursing and speech-language pathology because they were going to graduate and go out into the world and touch people’s lives each and every day with their talents, and they’d get paid to do what they loved. I wished I could follow my dream of becoming an artist by studying writing or art or design.

But could my creative, business-y work really touch someone’s life the way theirs would?

I was too afraid of the unknown.

Too afraid to fail.

Too afraid to be less than perfect.

Too afraid to expose my feelings through my work.

Too afraid I wouldn’t be able to support myself.

Too afraid of all these things that stood in my way.

They were my fears. And piled up together they appeared as a roadblock to the path to following my dreams.

Upon graduating, I start out in the corporate world with that versatile business degree, and I get a taste of success in the form of bonuses and commissions that keep rolling in as I continue to prove my worth to the company as the top-grossing recruiter within the agency. I like this compensation system, and so I work harder and harder. I’m helping people find jobs, and I’m helping companies find talent they desperately need, and it feels rewarding all around.

But over the years I become greedy. I work longer and longer hours to pull in the “big bucks.”

At the end of 2005, as I’m anticipating the best year-end bonus of my career, the life I had worked so hard to build up to that point came crashing down around me. I suffered what could only be described as a “nervous breakdown” at that moment. I spent a few nights in a psych ward, but upon my release the psychiatrist I saw attributed the episode to the lack of sleep I had experienced the week before when my husband was away on business travel.

Two weeks later that hypothesis would be proven wrong when my mind succumbed to another manic episode for which I had to be hospitalized on Christmas. Talk about the lowest low one can feel — being left by your family at a psych ward while your mind unravels faster and faster until you’re unrecognizable to even yourself. That was eight years ago, and Christmas, to this day, still brings up mixed emotions for me. More so gratitude now, but fear used to consume my thoughts. Fear that it could happen again, that my life was over now that I was diagnosed with a mental illness. That I’d never have children. That my husband might leave me. That my life was practically worthless now that my brain was sick.

I spent 2006 behind a veil of black. I mourned the life I had to leave behind. My success as a recruiter, my friends at work, my nice, fat paycheck with all those bonuses and commissions. The tears were in endless supply that year, though I tried never to let on to my friends how unhappy I was. I woke up most mornings with anxiety crawling up my spine and would crumble onto the couch at the end of the day, a mess of nerves and sadness and self-pity.

In my mind I couldn’t see past the day ahead of me. My future was so cloudy, it was as if my diagnosis had pulled an eye mask down over my forehead so that my vision was blocked. No more thinking a year, two years, five years down the road like I had been so used to doing. Those days it was about surviving to see the next sunrise. I battled suicidal thoughts and although ashamed to tell my husband and parents about the images in my head, I did. My psychiatrist adjusted my medication and over the course of several months, the thoughts gradually began to dissolve. I was no longer fighting for my life each day, but I was still battling the voice in my head which asked me continuously what my purpose was. 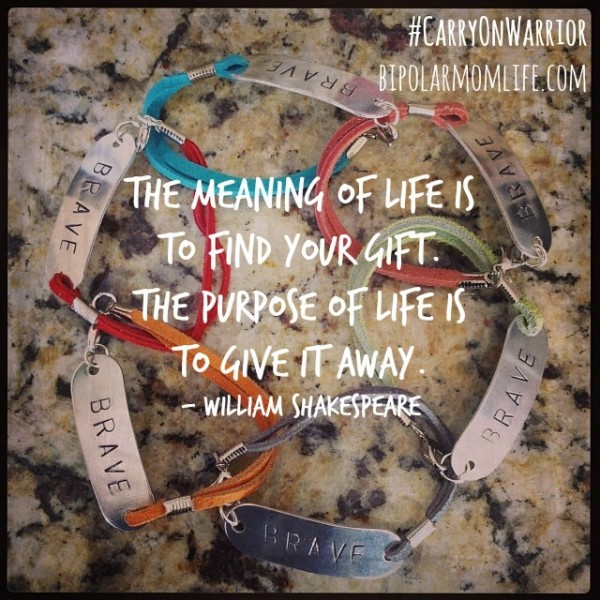 It’s been almost nine years since I was diagnosed with type one bipolar disorder. I’ve had two kids and had two more hospitalizations because I was protecting my babies from the psychiatric medication in my bloodstream which I know now I’ll have to take for the rest of my life. I made it through five years of mania and meds and therapy and psychosis and depression and wanting to just make it all stop. And came to the conclusion that the reality of life with mental illness is that it will never stop; you can only learn to manage it so it doesn’t manage you.

Having overcome my mental health disorder allowed me to find the courage to write about my experiences. It may have taken me time to understand the beauty and impact of true vulnerability, but I’m proud to say that I’m there now. Telling the world that I live with bipolar disorder and still love my life has been the most liberating and gratifying step I’ve taken in this career I’ve carved out for myself. Dave is now the first person I go to for advice. I feel lucky to have such a close friend as a mentor so I don’t feel like I’m starting completely from scratch.

I’ve become a mental health advocate, and I run a nonprofit called “This Is My Brave,” whose mission is to ignite and actively promote a positive, supportive, national conversation surrounding mental illness. Next month my associate producer and I will debut “This Is My Brave” – the show: a live, theater-based production made up of 14 individuals from the community who will share their stories of living with mental illness through personal essays, poetry and original music in an effort to silence stigma and inspire change.

I’m grateful to have found meaning in my life and to be able to give hope away to those who might be in the midst of the same painful place I found myself in years ago. I know they can find a way out with the support of friends and family and quality psychiatric care. If I can do it, they can too.

Jennifer Marshall is the Executive Director of This Is My Brave, Inc., a 501(c)3 non-profit organization dedicated to ending the stigma surrounding mental illness by sharing true personal stories through poetry, essay and music. She writes at BipolarMomLife.com.