Why I Love My Dogs and Cancer Sucks

If you know me or even if you just follow me on any social media site, then you know I am, well, obsessed with my dogs Lyla, Ziggy, Jovi and Lennox, and post way too many pictures of them. If you don’t know me then just imagine all the pictures new parents post of their kids and multiply it by 10… million.

I love dogs, I love my dogs, I love your dogs, I just love dogs. They bring joy into my life, and they have an unconditional love that knows no bounds. So when they are taken from us it hurts.

If you are not an “animal person” or even a “dog person” you probably don’t understand this fully. Trust me on this one.

These two guys are “my guys” — they are Lyla MuﬃnFace and Ziggy, both my BAEs. I just can’t get enough of them. They are the bestest friends, they sleep together, play together, eat together. They share a food dish, a kennel, the couch, and my lap, and get lots of petting from me. 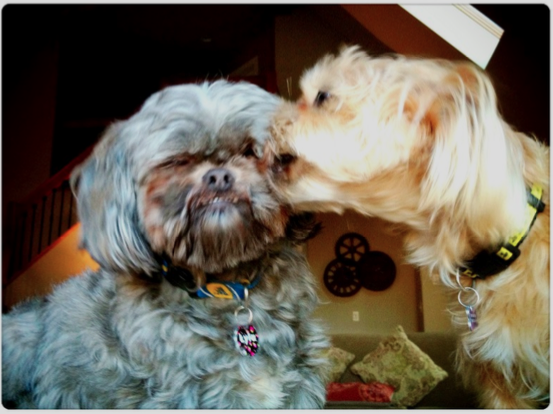 I don’t care what people think — I am a 32-year-old married man who dresses them up for Halloween, Christmas cards and West Virginia games.

They are basically two furry children of mine.

Then there is Len and Jovi, my wife’s dogs that have become mine as well. They are the opposite of Lyla and Ziggy, in where Lyla and Ziggy are a combined 35 pounds soaking wet, Len and Jovi are 60 pounds-plus a piece, but they act like big ole lap dogs.

And yes I dress them up, too. 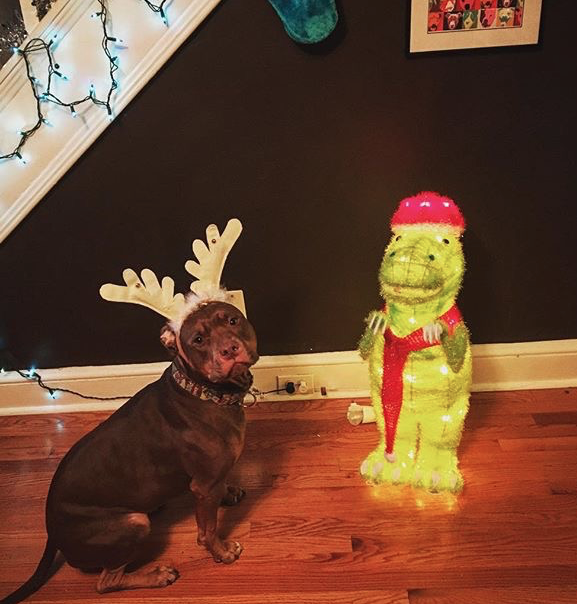 A shrink would probably have a ﬁeld day with this.

Well, after thinking about it honestly, now I understand why I love these guys so much, and it coincides along with one of the many reasons why cancer sucks.

When I was 9 years old I was at the town pool enjoying a some very intense tetherball games (no cherry-bombing, of course) when I was paged to the front desk. My parents, who just got back from vacation, called to talk to me to let me know they had a surprise for me they’d brought back, and to come home ASAP. I hopped on my bike and ﬂew home.

When I got home, I went into our downstairs room. What greeted me there was the best friend I had never met before — a golden brown Wheaton Terrier puppy. 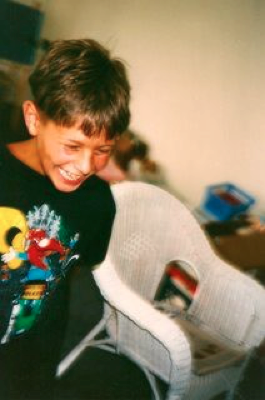 As you can see from the above photo, I was shocked and thrilled. I was never a kid who constantly wished for a dog, so this surprise was well, a surprise. From that day forward we were inseparable.

When naming her I took a very modest approach and named her Jamie, after myself…

Jamie was a great dog but an even better companion, especially for me. I went to grammar school up the street from my house so my mom wrote me a note to go home for lunch every day, and I would go home and walk Jamie.

When I got home I would take her outside and play games with her in the backyard. We tried playing football, but it never worked. I would throw her the ball and chase after her until she would inevitably get overexcited, hear a noise and take oﬀ. The next hour or two would then be spent searching for her, praying she’d come back.

I remember promising everything under the sun as long as she came back, and she always did.

Jamie loved car rides like most dogs do, but for a kid like me, I loved watching her get so excited just by us saying the word C-A-R. I would always ask my dad if “Jamie could come” wherever we went. I specifically  remember she would always come with us on our weekend trips to Blockbuster, and as we would get close she would start barking and freaking out. I thought it was amazing.

As I grew older our bond grew stronger. She would stay by me on the couch and follow me around the house. She was always by my side. The exception was she always slept in her crate. As dog owners who crate train their dogs know, their crate becomes their home, their escape. Jamie was no different. At night she would lay down and rest there.

When I started high school, instead of walking to school I was taking the bus. My morning routine for the better half of three years was waking up, walking Jamie, eating breakfast and getting ready for school. But it was the next part of my day I will never forget.

Every single day Jamie would follow me down the stairs, I’d kiss her on the nose and then I’d walk out the door. She would race up the stairs to the couch that overlooked the street and she would watch me as I walked to the bus stop. When I would get oﬀ the bus and walk home, she’d be in the same spot on the couch (the spot that’s still called “Jamie’s Spot” by our family) and the morning routine would be reversed — race down the stairs, greet me at the door and lick my face oﬀ.

Jamie was a relatively healthy dog, with her biggest issue being allergies on her paws, so as you could imagine I was not prepared for what happened next.

It was April, I was 15 years old. One night Jamie was acting weird. I remember that night she slept in my room, something she rarely did. I can still hear her deep panting that night, like someone was cutting oﬀ her air. Her eyes were very glossy and glazed.

We had called and made a vet appointment for the next day.

The next morning, Jamie followed our same routine, except (I’ll never forget) when I started down the stairs I turned around and heard Jamie whimper.

She wanted to come down the stairs but she just couldn’t, and I could see the sadness and pain in her eyes. I walked up to the stairs, kissed her on the nose, told her I loved her and left for school.

That would be the last time I would ever see my best friend.

Jamie passed away that day from cancer caused by a mammary tumor at the young age of 6.

I remember the phone call when my parents explained to me how much pain she was in and that before she was put to sleep I could come see her. But they warned me she wouldn’t look like the dog I was used to seeing because of the drugs they had given her, etc.

I chose not to see her. I wanted my last memory with Jamie to be that kiss goodbye. I told her I loved her, and the look in her eye told me the same thing.

When I got home I remember getting on my bike, riding to the basketball courts and just shooting for hours, not wanting to go back to my house because she wouldn’t be there. That’s the day basketball became an escape for me, and still is.

Jamie left us less than a month before my 16th birthday, when I would get my permit. My biggest regret, if that’s the right word, is that I missed out on ever being able to take Jamie on a car ride. 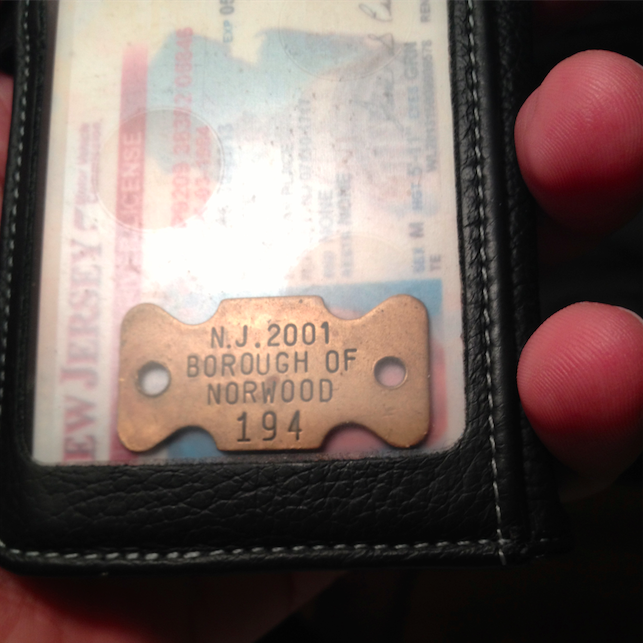 More than 15 years later I still keep her Jamie’s license in my wallet, with my license, so she is always with me when I ride in the car.

That is why I will always love my dogs and why cancer sucks.

I love animals. I have 3 cats and 3 dogs. Two of the dogs live my parents but they are “my” dogs, Lyla and Ziggy. Why they live with my parents is a great subject for a future “The Mighty” post ???? When my wife moved in so did her now 9 year old pit Jovi. I have to admit I was always afraid of pits but her and I are BBF’s now, we snuggle. They have a bad rep., again good fodder for a future story ???? The three animals that my wife and I got together were our three cats. Two as kittens Musket, I am a big West Virginia Mountaineer Fan) and Tyrion, we both are huge Game of Thrones fans. The third cat was brought home by my wife when she was a year+ old because no one else wanted her. My wife said I could name her “Anything I wanted.” I jumped at the opportunity, so our third cat’s name is Missy Misdemeanor Elliot and I refuse to call her anything different. I teach during the school year as does my wife and in the summer I Uber/Lyft and she works in an animal hospital. We are expecting our first child in 3 weeks or less ???? I love tech, I struggle with my mental health but I am very open about it, and I am also currently an out of work basketball coach ????