How Justin Bieber Helped My Daughter Stay Strong Through Cancer

From the very first time my daughter, Quinn, and I heard Justin Bieber croon his song “Baby” in 2010, we were Beliebers. We played the song loudly and relentlessly, and to the dismay of the rest of the family, I also sang along passionately to the lyrics.

In 2013, Quinn, who was 7 at the time, was diagnosed with an aggressive brain cancer called a primitive neuroectodermal tumor (PNET). Justin unknowingly became a source of great fortitude for Quinn during her illness. Within days of being told she had cancer, she insisted we immediately fill out a Make-A-Wish Foundation form so she could apply to meet Justin Bieber. Without a second of hesitation, she knew what her one true wish was.

Quinn decorated her hospital room walls with posters of Justin and spent many hours watching his DVDs and listening to his songs.

“There were two special songs that helped me stay strong during my cancer treatments: ‘Believe’ and ‘Be Alright,’” Quinn said. “I told myself over and over again to believe I would get better and that everything would be all right. And it worked.”

“When I had radiotherapy, I would get this funny smell in there,” Quinn said. “Whenever I hear ‘All Around the World,’ the smell comes back to me.”

If Quinn vomited from a chemotherapy treatment or got a temperature, she would say, “I’ve got ‘Bieber Fever’ again.”

Within a few days of finally returning home and after months of treatment in another city, Make-A-Wish advised Quinn that she would get to meet Justin and attend his upcoming concert. She had harbored her dream, her wish, steadfastly for many months. It had helped her during some of her sickest days. It had given her a goal, something to look forward to. And now it would finally happen.

The pure unadulterated joy on Quinn’s face when the Make-A-Wish volunteers came to our house with all the details is a moment seared indelibly in my mind. Quinn had believed, and everything was going to be all right.

The day dawned. Quinn made a little photo album to give to Justin depicting his unwitting involvement in her life and wrote him this letter: 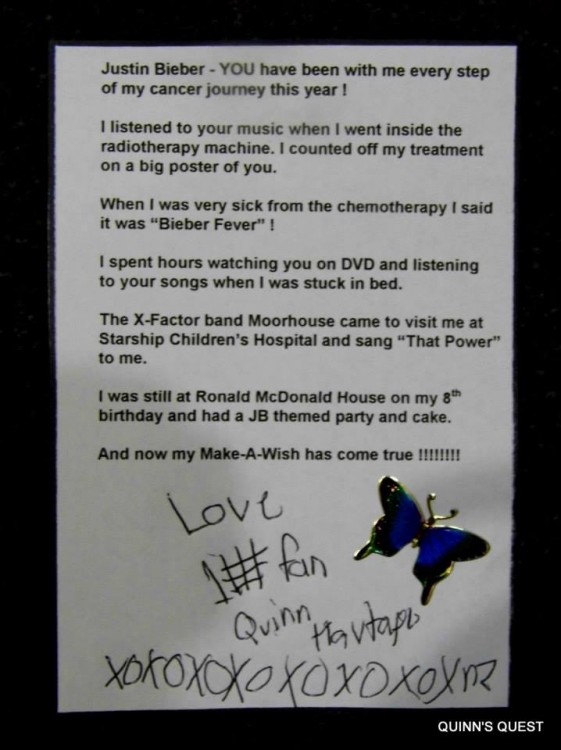 Justin took it from her respectfully, hugged and kissed her, autographed merchandise and posed for photos. He was such a gentleman — courteous, charming, gently spoken.

Justin Bieber has granted more than 250 wishes through the Make-A-Wish Foundation, according to Today. Pretty impressive for any young man.

The Mighty is asking the following: Share a powerful moment you or a loved one has had with a public figure. Or, write a letter to a public figure who you feel has helped you or a loved one through his or her work. If you’d like to participate, please send a blog post to community@themighty.com. Please include a photo for the piece, a photo of yourself and 1-2 sentence bio. Check out our Submit a Story page for more about our submission guidelines.

Roanne Barnes Hautapu lives with her family in New Zealand. Both of her children have endured years of chronic medical issues. Her daughter, Quinn, was diagnosed in 2013 with a rare brain cancer called a primitive neuroectodermal tumor (PNET), and her son, Fletcher, has anaphylactic allergies and eczema. Their lives for the past 15 years have revolved around hospitals. You can follow Quinn’s cancer journey here.