My Child With a Disability Is Going to Kindergarten

From the moment of my son’s very early and very unexpected birth, “Avery will do what he will do,” was the mantra my husband, Arick, and I lived by. We didn’t know if Avery would be able to grow up and do things. As he’s grown, it has become increasingly clear that not only will he do what he will do, but he will do it in his own time and in a way completely unique to him.

Avery was born at 25 weeks weighing 1-pound, 3-ounces and struggled to stay with us for his entire first month. From a patent ductus arteriosus defect in his heart that led to surgery at around 2 weeks old, to an inability to process feedings, to not gaining weight, it was the hardest month of our lives. He very slowly started to improve and at 32 weeks gestation when he was a little over 2-pounds, he was given his first bottle. I remember them telling us that this could be a turning point. Either he took the bottle and did well or he wouldn’t and feeding would continue to be a challenge. He needed a little support but our tiny son took that bottle like he’d been doing it all along! And they were right. It was a turning point. He started to gain weight consistently for the first time. In another eight weeks after a total of 111 days in the NICU, he came home. For every scare he gave us, he did something amazing that renewed our hope and allowed us a moment of reprieve. 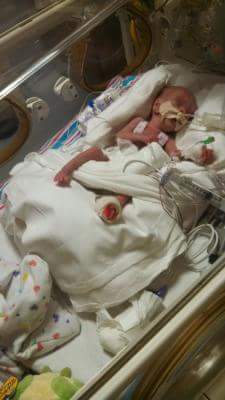 When he turned a year old, he couldn’t sit up. He didn’t babble or play with toys. He was about 11-pounds and essentially a newborn. He was also starting to show signs of cerebral palsy, which we knew from the NICU to watch out for. He kept his left hand clenched and his entire left side was tight. I got him evaluated and he started physical therapy (PT). A month later he was formally diagnosed with cerebral palsy. Four months after that, with polymicrogyria. Those were some dark months, too. In our minds and hearts, it was back to square one. We’d watched our son fight for his very survival and now we had to accept that he’d be fighting for everything. Forever. But still we told each other, he’d do what he’d do. And we’d love him through it.

With lots of PT, Avery took his very first, very unsteady steps just before his 3rd birthday. He did it! He walked! The first thing I thought he’d never do, he did. In Avery time. Although he couldn’t speak in phrases, he had a few words. We started twice a week speech and within six months he could say “more milk please” or “go play now.” At his three and a half year visit with his neurologist, the doctor looked at me completely awestruck and said. “Knowing what his brain looks like, I can’t believe he is talking like this.” Victory number two!

On his third birthday, Avery started attending the preschool program for children with disabilities (PPCD) — it was a scary thing. An all day program through the local school district. I was overwhelmed thinking about him being away from me for eight hours a day. He cried every day I dropped him off until I finally decided I needed to give it one more week and if it didn’t improve, I’d withdraw him. It was no longer beneficial for either of us. That week he stopped crying and I realized he knew the colors red, blue and yellow. We were driving one day and he saw a stop sign. “S-T-O-P” he said. So I kept on bringing him because I saw the benefit. We were warned at birth that Avery would most likely have severe developmental and intellectual deficits. And here he was at not even 4 knowing his colors and letters.

Kids age out of PPCD around kindergarten age and either go into general education or life skills classes. My goal for Avery from day one was to give him as typical a life as any other kid, and I’d have accepted either for him. He was impressing his teachers and school therapists (and everyone who met him). At the middle of this past school year I pulled his teacher aside and asked her if she thought he would be ready for kindergarten. Her answer? A resounding yes! He was potty trained, able to move around the school freely — at his own pace — and had become increasingly self-sufficient. I went to my car and cried for a good 10 minutes. I cried tears of joy and tears of relief. And if I’m being honest, a few tears of fear. By early May it was confirmed. Academically Avery was doing better than most kids already in kindergarten. He was obviously ready. Avery will be going to general education kindergarten in August! With his peers!

So many tears I cried over these last five years that wouldn’t have changed anything. Would I love him if he didn’t walk or talk? Absolutely. Nothing he’s ever done or not done could change that. But seeing the things he has done — those are the things that have changed not only him, but Arick and I. That have made us more understanding. That have made us look at other parents and not for one second judge them or their situation. We’re all just doing the best we can. Sometimes we fall short but sometimes we excel in ways we never thought possible. Avery is this idea personified to his dad and me.

I want his kindergarten teacher to know what this journey has been like. Chances are when I meet her, I’ll pull her aside and give her the abbreviated, cliff notes version of Avery. I’ll tell her to watch out for him because he isn’t the best walker. To listen closely because sometimes he gets excited and his sentences become one long, convoluted word. I’ll tell her to make sure that he’s included in things and allowed to do things in a way he can. Because things are hard for him. But if you give him a little bit of time, a little bit of support and a whole lot of love, he’ll do it. He’ll do it the Avery way.

I am Mom to 17-year-old Abby and 8-year-old Avery. Avery’s premature birth at 25 weeks and consequent cerebral palsy and polymicrogyria diagnoses were my catalysts into the world of special needs. I am an avid reader, writer and a two time preeclampsia survivor. If I’m not at my computer, I’m likely off creating something!

stephanie-hartman
Want more of The Mighty?
You can find even more stories on our Home page. There, you’ll also find thoughts and questions by our community.
Take Me Home