Why It Can Be Hurtful to Tell Someone With Chronic Illness, 'Don't Be So Negative'

“Don’t be so negative” is a sentence many of us hate to hear or read. And sadly many of us hear it a lot, be it from strangers that just learned of our chronic condition or even our loved ones. I’m sure the people saying that sentence don’t know the power behind it. A seemingly innocent remark, pointing out how maybe some of us seem to be “acting negative” rather than being positive. 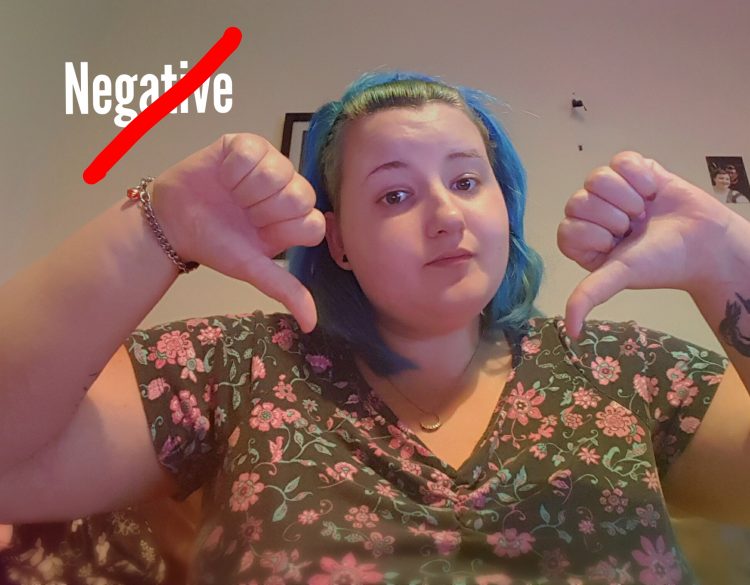 I’m here to tell all able-bodied people that you must stop saying that to someone who is struggling with mental or physical health. Every time you say anything along the lines of me being negative, it’s like I’ve been shot. The shock that someone would even say such a thing is usually the first thing that goes through my mind. Let me try and explain.

When you spend every day of your life tackling your chronic pain or mental health issues, it takes a lot of strength and courage to look at the world and simply smile. I spend hours and hours looking in the mirror wondering if there’s any point using the little energy I have to get dressed if I’m only going to curl up on the sofa and writhe in pain anyway. I constantly deal with people getting annoyed at me for cancelling plans due to my pain flaring up. I couldn’t possibly list every little thing I go through in a day, and yet I do my best to smile.

When I focus on the negatives, it’s not me “bringing down the mood” or “not attempting to be happy,” it’s that I spend most of my life in pain, and I get lots of drama for it. So it’s OK for me to be negative. It’s OK for me to hug a pillow and cry about how everything has gone to hell. How I get judged for every move I make, how I have to fight the doctors to justify my medication that keeps my pain at bay.

An able-bodied person is allowed to be negative too and have days where they cry and moan, so us chronically unwell people are allowed as well. We fight to be positive, we fight to smile and laugh. Some of us struggle more to do those basic things.

I think the whole idea that having time to be negative is a bad thing should be rethought. People are allowed to have time where they eat ice cream and watch rubbish films and cry into pillows, so why is it I see more people giving chronically and mentally unwell people more trouble for it than anyone else? We have valid reasons to be negative and the fact a lot of people accuse us of not being sick because we seem happy is a ridiculous accusation. We’re accused of being healthy when we try to smile and be happy for everyone, then we’re told we’re too negative when we show what we’re really like when we’re in pain. How is that fair on us? How is that fair on anyone? The word “negative” has become a cruel word for many of us.

I write this to tell you to please stop telling someone who is mentally or chronically unwell to “stop being negative” as it can hurt us a lot. You’re making it more and more difficult for us to be who we want to be. And if that means we’re negative for most days, then so be it. It doesn’t make us bad people, it makes us honest. It makes us show how we’re really feeling. Maybe instead of telling us to stop being negative you ask us if there’s anything you can do to help us. Small gestures to show you support us will do more to make us “positive” than it will just telling us to stop being negative.

There’s a lot of “negative” words in that article – I hope it all makes sense so you can pass it on to those that maybe don’t quite understand that what they’re saying is hurtful.

I’ve struggled with chronic pain for two and a half years and don’t yet have a diagnosis. I also suffer with seizures with an unknown cause for them too. I often end up injuring myself because of these seizures. I fight against severe depression, emotionally unstable personality disorder and anxiety. Despite all of this my favourite thing to do is spread happiness wherever I can. I often promote body positivity and awareness for chronic conditions. After discovering how passionate I was for it I took to writing in order to make those aware of what really happens in the chronic and mental illness world.

Save
Conversations 21
We use cookies and related technologies to help identify you and your devices, enhance your experience and conduct advertising and analysis. By choosing "Accept", or by using this site, you are agreeing to our use of cookies. You can read more about how The Mighty uses cookies in our Cookie Notice.
Manage Choices
Accept