Lady Gaga has had a big year: her new film, “A Star is Born,” topped $350 million at the box office, her Elle Women in Hollywood acceptance speech advocating for a new way to talk about sexual assault and mental health went viral, and she is about take the stage once again for her residency in Las Vegas. Yes, she should be honored and acknowledged for her groundbreaking creative work. She is, after all, a supreme artist, musician and icon with a vision and a unique point of view. And, as the world learns more about her, some of her most transformative power comes from being open, publicly vulnerable and simply herself as she makes visible her chronic health and mental health challenges.

Research shows that 38 percent of American women have a chronic illness, yet there are few people publicly talking about what it feels like to appear healthy in the world while also navigating caring for chronic illnesses. In many cases, because of the way society sees — or doesn’t see — women’s pain, women struggle to be heard at the doctor, feel shame at work and find it difficult to find communities; ultimately, they often don’t get the care they need. In a world where sharing one’s own personal experience with chronic illness, pain, and mental health is still taboo, where health challenges may be seen as a weakness and when invisible disabilities are rarely validated in the world, her authenticity in navigating her personal health and mental health is radical — and it could offer seismic change for how we see, validate and show up for people in the moments they need it most.

There are endless ways Gaga does this both in her art and in her public persona. Here’s a round-up of some of her most compelling.

1. Health is a perfect illusion.

Gaga deconstructs the idea that one must look a certain way in order to be sick by showing that she can put on the best show for her fans while also physically hurting. Illness and success are not mutually exclusive. One should not have to “appear” to be ill to validate their pain. In a scene in the Netflix documentary about her life, “Five Foot Two,” Gaga (or “Stefani” as she introduces herself to her doctor) sits on an exam table clad in a paper gown and explains, “I have chased this pain for five years. And, the theory in all of this is that I’m f*****g strong and I can still be me. And when I feel the adrenaline in my music and in my fans, I can f*****g go. But, that doesn’t mean I’m not in pain.”

She explicitly calls for an understanding of mental health in the context of healthcare overall. Mental health, like chronic illness, deserves a space in disability activism. Mental health dictates how people show up in a world that was not meant to support them. At her Elle Women in Hollywood speech earlier this year, she not only articulated rape culture as a public health issue, but also called for a new charter in mental health: “Depression, anxiety, eating disorders, trauma… these are just a few examples that can lead to this tornado of pain. So, what I would like to say in this room of powerful women (and men!) today is let’s work together to beckon the world towards kindness… I want to see mental health become a global priority.” And, in her work for the Born This Way Foundation, she is doing just that — transforming the world through acts of kindness.

3. The show must go on! And sometimes it doesn’t, and that’s OK.

Gaga had to abruptly come off the road during last world tour in order to take care of her health. After deciding to end her Joanne world tour early, she turned to Instagram to share her PTSD and fibromyalgia diagnoses and invited her over 30 million followers to join her in self-care. In confronting the devastating reality that health may interfere with the one thing you love most, in making the brave decision to say I can’t do this right now and this is what I need to do for myself right now, she leads by example and demonstrates the importance of self-care as a form of radical self-love in face of the world’s expectations. 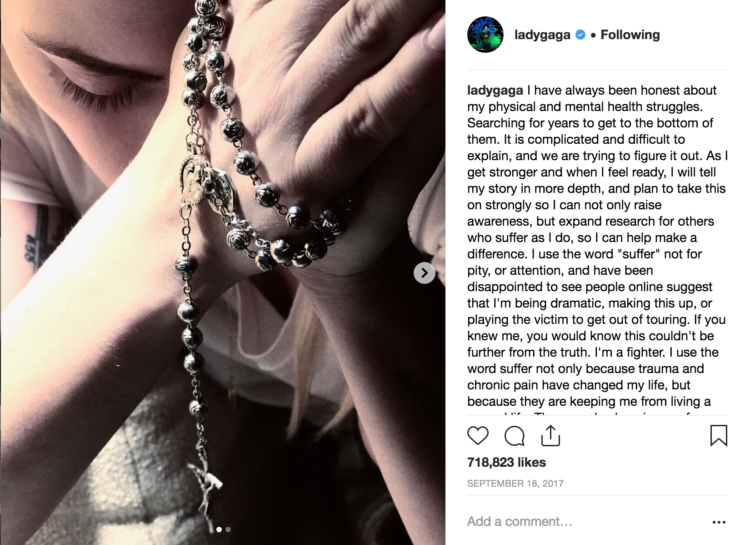 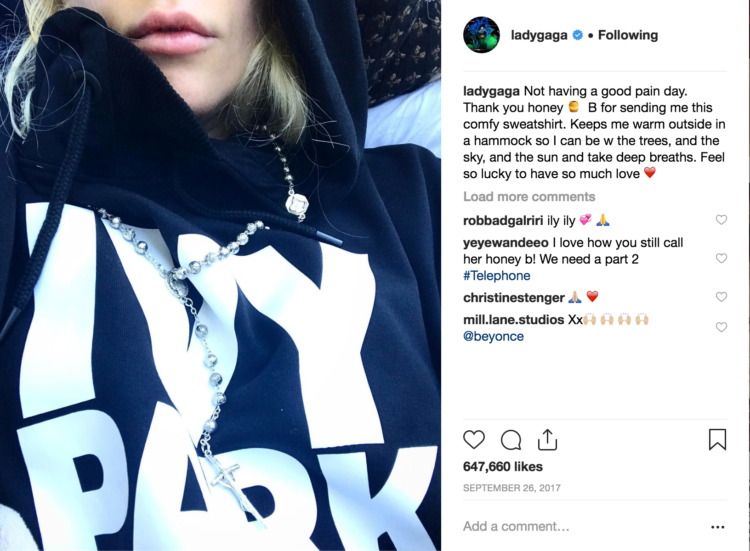 As someone who has lived with a chronic illness nearly my entire life, Gaga’s radical vulnerability in the face of chronic health problems informs both her artistic point of view and her socio-cultural relevance. Particularly in a world where chronic illness is invisible, her transparency in the wake of health challenges charts new possibilities for how society acknowledges, validates and shows up for people who live, survive, and even thrive while living chronically ill.

In some ways, Gaga’s public vulnerability about health, mental health and sexual assault may seem as though it flows in tandem to her own creative work, with her fame and celebrity serving as a platform to have such important conversations. In reality, it is anything but that. For the last decade — before she publicly shared her story of sexual assault, before she disclosed her diagnosis of fibromyalgia, before she let cameras into her home to follow her through the ups and downs of chronic pain — she made music that helped people who feel like nobody understands them feel validated, to feel like they are absolutely perfect born this way. In truth, she’s been using her art to process and share her life experiences with the world her whole career. Her art helps people — it’s certainly helped me. But, as someone who rarely sees people in the public eye talk candidly about their health in an honest and open way, her radical vulnerability with the world gives me a million reasons to love her evermore.

Laurel is a multimedia producer and social advocacy student. Or, a social scientist with a track record for getting things done. She has lived with Crohn's disease since she was 9-years-old and has spent the last decade working in media and policy to increase access to quality healthcare.