Why My Kid's Medical Needs Come Before Someone Else's Appetite

When we first came home with AJ, I was really self-conscious about doing his medical treatments  in public. I would take his stroller outside of the restaurant to suction him. I would schedule our trips into town and stores to be between his meals and meds, so that I wouldn’t have to do them in public.

It wasn’t because I didn’t know what I was doing, it was because I was afraid of offending someone else. It was because I had read stories from other parents who had been confronted by strangers, or were even asked to leave a restaurant because caring for their kid was “gross.”

I really wish I could go back to the me who thought that way, and shake some sense into her.

Here’s how I think, and what I know, now.

First — I was setting a ridiculous example for AJ, showing him that he should essentially be embarrassed by his medical needs. I don’t want AJ to grow up thinking that he should try to hide himself from the rest of the world for any reason — medical or not.

AJ has just as much right to experience the world as anyone else. I would actually argue that he has fought so hard for his life, that he deserves those experiences more than most. His medical needs should not hinder him from getting the most out of his life, even if that is just a trip to Target for groceries (well, except during cold/flu/RSV season when we go into lockdown, but that’s a whole different story).

Maybe it sounds harsh, but those meds and needs are what keep him alive. If it ruins someone else’s meal to hear a suction machine, then oh well. That person will live just fine without finishing their loaded mashed potatoes. AJ, on the other hand, might not live without his treatments.

Third — people in general really aren’t mean. They may look quizzically at you, or do a double take. They may turn around to see what the noise is. They may even ask a question or two…but we haven’t had one person say anything negative to us at all while we have been out and about.

In fact, we’ve had more of the opposite. People will tell us they think it’s amazing that we are able to get out and see the world with AJ. Or they will tell us how cute or sweet he is. We’ve even had strangers anonymously pay our bill at restaurants.

Ultimately, if someone has something negative to say or are offended by the medical treatments he needs to have done while we are out and about, the real problem is that they’re missing out on seeing the truly amazing kid that’s right there in front of them. 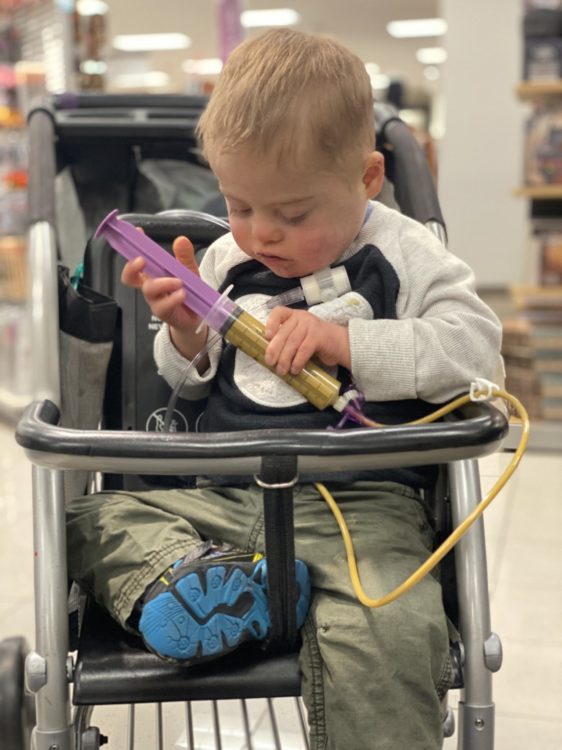 A version of this story originally appeared aaronandambersfamily.com.

Amber Gale
•
Follow
ambergale
Want more of The Mighty?
You can find even more stories on our Home page. There, you’ll also find thoughts and questions by our community.
Take Me Home