I want to talk about a headline that shared what President Obama said… how dropping off his daughter at college was “like having open heart surgery.”

It’s not just about what he said, but more so about how people are responding to people like myself who’ve had open heart surgery. Saying we need to lighten up. To them we’re in the wrong in speaking up about it.

As an adult with five congenital heart defects and having had four major open heart surgeries myself, it’s not something I’d compare to something that’s unpleasant. It’s not something you can compare unless you’ve personally have lived through it.

I’m not a parent and sadly will never be able to be one, but in 2011 I was there when we dropped my younger sister off at college and I watched my mom go through that. It was hard. We all cried. And coming back home, the house felt empty. It’s an adjustment period.

Last night while talking to my mom about this, for her it felt different than when she has had to hand me over to the nurses to go to the operating room for all of the open heart surgeries I’ve had, and all the other surgeries I’ve had for different reasons as well. You can’t compare them. Both are hard, but you don’t drop your child off to college thinking they might die, whereas that’s a main thought with open heart surgery. She does understand the metaphor, but it’s a poor choice of words.

It’s so sad to see how many people are trying to diminish people’s feelings who’ve actually have had open heart surgery. 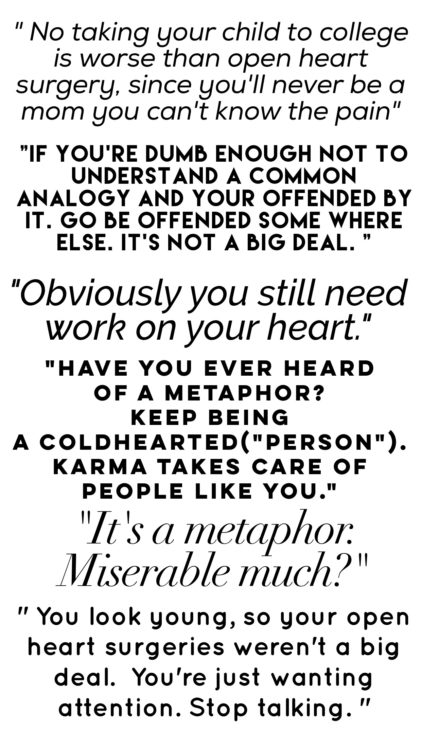 People know open heart surgery is hard, but it’s so much harder than anyone can ever know, unless you’ve lived it. This might sound graphic, but it needs to be said to say what it means to have had open heart surgery. It’s different when you’re personally on the operating table, where they have to use a saw to cut through your sternum. When you’re literally opened on a surgical table. When you’re put on a heart and lung machine. When your heart is stopped. When they place chest tubes, IVs and intubation inside your body. Blood transfusions. So many different medications. That hands are inside a chest cavity to try and help what’s wrong, to help us live longer. It’s a long, hard and difficult thing to have lived through.

This is my own personal side of this. Having five congenital heart defects, it’s not cureable, so needing to have multiple open heart surgeries is pretty common.

You can’t tell me I’m overreacting. That it’s just a metaphor. For me and many other people, it’s not. It’s very real.

It’s one thing to say “it’s hot as hell outside,” and then for people to say that is exactly the same as using “open heart surgery” as a metaphor. It’s not.

The graphics I’ve made are some of the comments that people said to either my self or others on Facebook about this. People have to know those comments are never OK to say to anyone. That’s what made this worse. 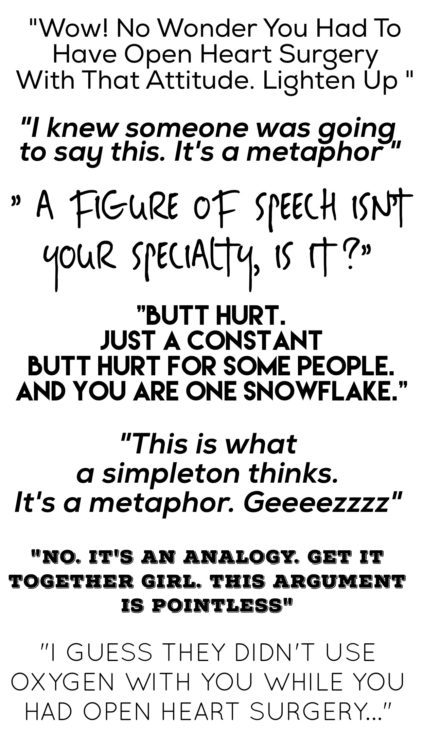 Don’t tell me and others that our feelings aren’t valid. Don’t call us “stupid” for not seeing it as just a metaphor or say something rude like, “I guess they didn’t use oxygen when you had open heart surgery.”

Be mindful in what you say. Allow people to have their own feelings, especially with something that we’ve personally have lived through.

Don’t say we can’t and shouldn’t say anything to this.

Brittani loves to cook, photography, cheese, Chicago and her dog. She wishes she could sing like Karen Carpenter. She happens to have a rare congenital heart/lung defect TAPVR type 3, Ventricular Septal Defect. Atrial Septal Defect. Pulmonary Vein Sentosis. Patent Ductus Arteriosus. Pulmonary hypertension. COPD. Hypoplastic lung syndrome. RA, TMJ and because of her heart defect, she only has one working lung. She’s had many surgeries, four being major open heart surgeries; her first was done when she was less than a day old. She&#8217;s now in her late 20&#8217;s, and is learning how to be an adult with congenital heart defects and to advocate for herself and others with chd. Follow her on Instagram @asiseethis

brittani-j
Want more of The Mighty?
You can find even more stories on our Home page. There, you’ll also find thoughts and questions by our community.
Take Me Home