Why It's OK That Doctors Can't Cure My Daughter

Yesterday, I had the awkward conversation again — the one that breaks my heart even though I’ve repeated it numerous times. A colleague was running a marathon to raise funds for the local neo-natal unit. I sponsored him and mentioned that my daughter had spent eight days in the unit.

“No, she was born with half a heart.”

“Yikes. Did she have surgery?”

“Yes. She had a major operation when she was 3 weeks old.”

“Did that fix her heart?”

“No. She had open heart surgery at 5 months old.”

“Did that fix her heart?”

“No. She needs another open heart operation when she’s about 5 years old.”

“Will that fix her heart?”

“No, but it should keep her well until she’s a teenager.”

“Then… I don’t know. Possibly a heart transplant… or I’m hoping the doctors will invent some sort of computer thing to work as her heart instead.”

I feel guilty. I know I’ve got the script wrong. There’s supposed to be a happy ending. Doctors are supposed to fix everything.

Before my pregnancy, I would have told you that doctors could fix everything except cancer. I would never have believed that children could live on the brink of death from the moment of birth. I would have been happily deluded. Whoever I spoke to, whatever book I read or film I watched, parenthood was portrayed as a joy and pregnancy was a happy whirlwind of choosing strollers, decorating the nursery and planning a perfect childhood for your precious bundle.

Poppy never followed that script. Poppy has received palliative care from the moment she was born. At my first antenatal scan, I was asked to say goodbye to my unborn bump; she was dying. I refused, and Poppy seemed to hear me. She clung to life, desperately ill and with an incomplete umbilical cord. At 16 weeks gestation, the doctors discovered her deformed heart. We were given three choices that no parent should ever have to consider: if Poppy survived the pregnancy, we could take her home to die or we could ask her to fight through a series of grueling operations that would still leave her with a life expectancy of 20 percent and a potentially low quality of life. Or we could abort her. We chose to fight, but I received scans every fortnight for the rest of the pregnancy and was offered abortion at each one. I still cannot find the words to describe how shattered and isolated I felt. Miscarriage was highly likely and the odds of brain damage were given as 90 percent.

We were angry. We’d signed up to be parents. We hadn’t signed up for a course of relentless trauma, grief and guilt. We know that one day, Poppy is likely to be angry, too. She may disagree with our choice. She may ask questions that no child should ever have to ask her parents. 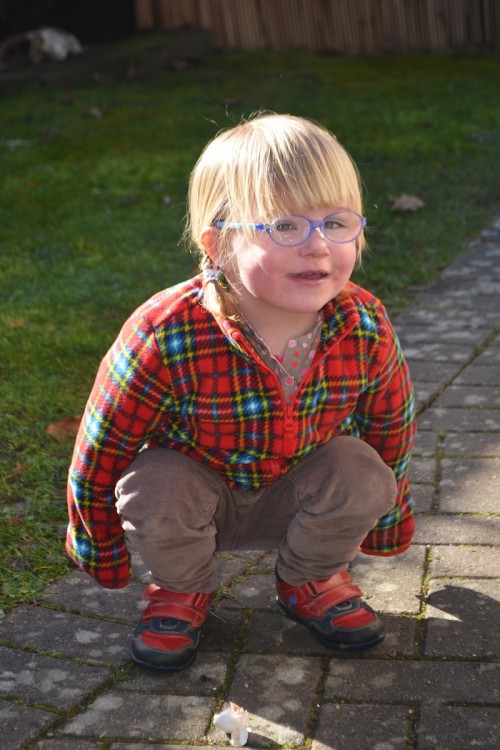 For now, she is great. Ridiculously great! She attends a mainstream nursery, loves swimming and going to the park, talks every second she’s awake and gives delight to everyone she meets. She has moderate visual impairment (before Poppy, I thought the single letter top row of the eye chart was pointless) but no other signs of brain damage. Poppy recently turned 3 and already recognizes the alphabet, composes her own rhymes and independently puts together 24-piece puzzles. She doesn’t walk much, and when she’s cold or sick, her skin turns the color of a storm cloud, but life has a fragile normality and a happy rhythm.

Poppy is starting to notice she’s the only one in the nursery who visits the hospital every week; soon, there will be new awkward conversations to master. Soon she may ask why she’s covered in scars or why she can’t keep up in the gym lesson. Soon we’ll have to prepare her – and ourselves – for another operation and another fight to survive. I don’t think we’ll ever be ready to do that.

Despite this, there are no regrets. Most days, there’s even a sense of peace. We’ve battled hard to not let Poppy’s condition define her or how we treat her. Some dilemmas are small. Do we let her eat a biscuit even though she hasn’t had her tea to make sure her heart gets some energy? Some moderate. Will she get sick if she plays in the snow? And some more fundamental. How much extra fuss do we make of her birthday/ Christmas/ every new milestone “just in case”? Our life is fraught with struggles – medical, emotional, practical, financial and educational – but balanced by blessings. There have been moments of joy and humor in each one of the 1,100 days with Poppy so far; even on the darkest days of 12-hour operations, incubators, intensive care, ambulances and impossible decisions.

I love being a parent. I love the days out, the messy play, the whimsical conversations, the laughter and rediscovering the wonders of nature. I wake every day to the word “Mummy” and unconditional adoration. I share every day with my own boisterous, bubbly miracle. Poppy may have a horrifically cruel, life-limiting and incurable heart condition, but she lives life – however short – with an insatiable determination and plenty of mischief. She’s taught us to live in the moment and celebrate each moment; everything we experience together has an irreplaceable intensity and wonder. If the day we dread most does come and Poppy is no longer with us, I hope I can hold on to this wealth of happy times and the pride and privilege I’ve always felt as her mother.

Poppy’s doctors may not be able to fix her, but so far, they’ve known precisely what was wrong, respected our decisions, bought us time together and saved Poppy’s life several times with mind-bogglingly complex surgery. These gifts are worth as much as a cure. We cannot promise Poppy a happy ending or give a positive answer to the question “Did that fix her heart?” but we’ve had three years and counting with an indescribably lovely little girl. And in the words of Elton John, “How wonderful life is while you’re in the world.”

Emily is 33, married to Steve, 59, and they live in the Thames Valley, England. She works in IT. Poppy was an unexpected honeymoon baby and is their only child.

emily-beazeley
Want more of The Mighty?
You can find even more stories on our Home page. There, you’ll also find thoughts and questions by our community.
Take Me Home