Why We Won't Stop Raising Awareness for Congenital Heart Defects 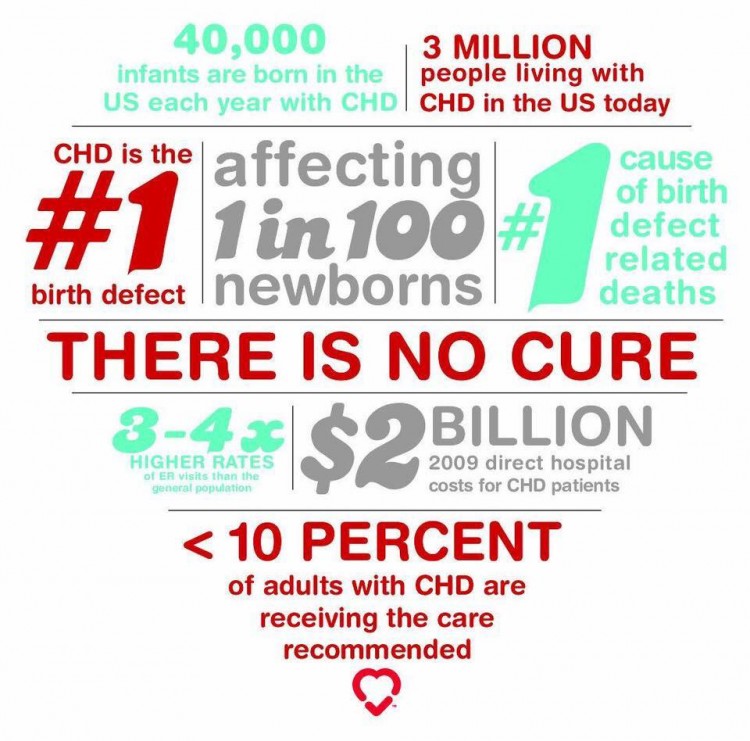 I often think of all those living with congenital heart defects (CHD) whose scars are beneath their shirts and stories behind their fears. But maybe the most disturbing yet motivating aspect is that most people are not even aware that CHD is the number one birth defect in the U.S. It impacts approximately one in 100 live births in the U.S. and it is the leading cause of birth defect-related deaths and yet most people don’t even know what it is. Sometimes it feels like we live in an unground world where all our stories are shared amongst each other but never make it into the public’s eye. Not only do we or our children live with an invisible disease, but just as importantly, we know so many don’t hear us, and you often fear for what you don’t know.

Maybe people can’t handle the truth of CHD, so they push it away. They don’t want to see the babies being laid to rest, the parents struggling, or the young child on a transplant list. Maybe by keeping it invisible we can protect others from getting wrapped up in the emotions that come with the waves of tragedy, hope, and fear that encompass everything that is CHD. Maybe that is the real definition of an invisible disease, so common that a child is born every 15 minutes with it, yet despite all the effort by many individuals and groups, there is so little public awareness — maybe ignorance is bliss.

Maybe you need to see it through the eye of somebody that is looking? Besides looking in the mirror every morning, all I need is a quick scroll through my Facebook feed to get my daily reminder of the many warriors out there young and old are fighting a battle most can only imagine. Their stories are the real reminder of the impact of CHD. There are the beautifully tragic stories of those that even in grief choose to move forward making a difference in the CHD community and the lives of others, the extremely raw images and moments of the deepest pain anyone could imagine, and the miracles and challenges so many of having overcome.

As I scroll, I see the amazing baby that I check in almost every day that has Tetralogy of Fallot just like me, who has been in the hospital for six months with an amazing family that hasn’t lost an ounce of faith. I pause to think what to say to the grieving mother who just brought one of her identical twins home from his first of multiple surgeries, the same surgery that his twin brother didn’t survive. I can’t stop looking at the picture of the baby’s heart whose mother got to hold it after she received a transplant. The tears stream as the most surreal image of a family holding their precious son after he gained his wings comes across the screen. Then I see the family that remembers their daughter by sponsoring a blood drive in her name, or the mother who puts together special care packages for babies in the hospital to memorialize her angel. Then there is the transcript of a father’s speech from a Congenital Heart Walk talking about the realities of CHD and how with all the hope, there is always dread buried beneath it. Then I see the beautiful family that is taking in hundreds of books to give to children in the cardiac unit they lost their son in, the same cardiac unit I have been in for all four of my open heart surgeries.

I could tell you about the mother who founded Pediatric Congenital Heart Association, which has become a major contributor to CHD advocacy and research, then there is the mother who started the Red Balloons for Heart Defects whose mission is to give CHD a universal symbol. And for those lucky enough to survive to be an adult, the Adult Congenital Heart Association fights for them as the population is exploding because of medical advancements and who face new challenges as they live longer than ever expected.

If I shared all the stories with you, we would cry, celebrate, and pray, but by that time I would have to start again. Because every 15 minutes, a new story begins. I choose for my Facebook feed to be the realities of CHD. It brings many tears, some from tragedy, some from hope, and some of the miracles. But it also brings inspiration to see the children who fight so hard, the adults who have survived and defied every odd, the parents who never lose faith, and all those affected that push to advocate for CHD no matter what because it is forever part of their life.

All the lives touched by CHD will never be the same. But we are standing as tall as we can to get your attention, to tell you it could be your child, to push for fetal echocardiograms, pulse oximetry, and other potentially lifesaving screenings. We all fear reading another story of another child dropping dead while playing because their heart defect went undetected. We look at your new baby just to see if their fingers or lips are blue and get concerned when you tell us they are not eating or gaining weight.

It is one thing to have an invisible disease, and it is another thing to be number one on lists nobody wants to be on, and still feel like you are invisible. I want all diseases to be advocated for and researched. A life is a life. But when you tell someone you have CHD, and they ask how long you have been in congestive heart failure, or you see that some of your medical records say you have had four coronary artery bypass surgeries, you know that the awareness of CHD has so far to come and you feel even more invisible.

I do know this: we will not give up, and we are gaining steam. We are warriors, mothers, and fathers, and we will fight until every last person is aware of CHD. We will find our pot at the end of the rainbow — a cure — so that no family, child, or adult has to endure such pain.

Joe was born with a congenital heart defect called Tetralogy of Fallot. He required his first open-heart surgery at 54 hours old and suffered a stroke after surgery. He has now had four open-heart surgeries, the last two days before his 30th birthday. He has struggled with anxiety &amp; PTSD for most of his life and believes a strong mind and building a team with a roster full of supporters is the key to successfully living with a chronic illness. He is a Board Certified Patient Advocate for families, children, and adults with congenital heart disease—helping them to navigate the emotions, diagnoses, and challenges they face in finding and understanding appropriate CHD care.

joe-valente
Want more of The Mighty?
You can find even more stories on our Home page. There, you’ll also find thoughts and questions by our community.
Take Me Home