Being adopted is taking up more real estate in my mind lately. But let me be clear, being adopted is always on my mind. Being adopted is something I take great pride in, but also something that affects my mental well-being, especially since becoming a mom myself. I firmly believe my life is better than what it might have been if not adopted. Even though I know that my adoption was a positive in my life, it still has negative effects on my mental health.

My journey with adoption is mine. My mental health intricacies are custom to who I am. You might see some similarities in my story to yours, but ultimately it is mine and I will no longer apologize for it, neither should you. Here are three ways being adopted has impacted my daily life as a mom:

1. Being adopted is a huge reason why I wanted a family.

This one might be a selfish one, but I wanted a child because I never saw a smile, a nose or personal traits in any other human being that resembled mine. I could say, so and so looks like me, right? But deep down, I knew that my family and friends all had counterparts to whom they could compare themselves and see parts of who they were in that person. That is such a warm and humbling feeling that I don’t want anyone to take for granted. I would encourage you to even embrace the flaws in which you share with your loved ones, it is a blessing in disguise. When I had my son, whom I fought very hard to have due to having Maternal PKU, I found the missing puzzle piece I needed. I needed him to fill a void and he needed me to be his mother. As cliché as it sounds, my son completes me. And at times, I do feel like it is my fault he has been challenged with the same mental illnesses as I am. But I know that this only makes us more empathetic to each other and those around us.

2. Being adopted has made me feel worthless, yet special at the same time.

The yin and yang with this one is enough to make someone with no mental challenges feel confused and conflicted. With me, it takes my
depression into waters that most don’t go. I was given up. I was the second of five children on my mother’s side. I was the only one who was given up (let that sink in). My biological mother had another child during my adoption process. She kept her, not me, along with an older sibling. My parents (and no I do not say adoptive) took me home at two days old. Knowing I was PKU positive, and without any positive outlook on my condition, they took me home and loved me as their own from the beginning. From that day, they fought for three years to adopt me. My biological parents kept us on a roller coaster as they kept changing their minds. They would go to court meetings, then miss some…come to some more, miss some more and so on and so forth. The laws back then really were made to protect biological parents, even if it was not for the best interest of the child. I had no legal last name or first name for that matter. I was not allowed to be baptized. I was a daughter and a sister to a family that wanted me from the beginning, yet technically belonged to the state. It was nearing my third birthday and I was finally adopted. I feel like I was the chosen one and the forsaken one at the same time. It brings up the “why me” depression path more than I like to admit.

3. Sometimes, I parent obsessively and compulsively.

I am sure my own mental illnesses have a ton to do with this. I am anxious over everything my son does or doesn’t do. But truthfully, it is like I feel I need to make up for some mistakes that I don’t even know I’ve made. It’s like, what if I am a failure? What if I wasn’t meant to be a mom, just like my biological mom was not meant to be mine? What if something was wrong with me and that is why they didn’t keep me? With my son, I could not imagine ever being away from him. When I think of a scenario, I tend to shut down, get angry and ruminate on those feelings. I am working on this through dialectical behavior therapy. How can I have been passed aside and I can’t even handle my son going to school for a full day? There must be something wrong with me? I would call myself “crazy” and much worse. My husband believes my experience of being adopted has led me to be the best mom in the world. Sweet, right? I don’t take anything for granted. Celebrate every single milestone, made up or not. I tell my son how very hard we worked to have him. How he is my miracle. 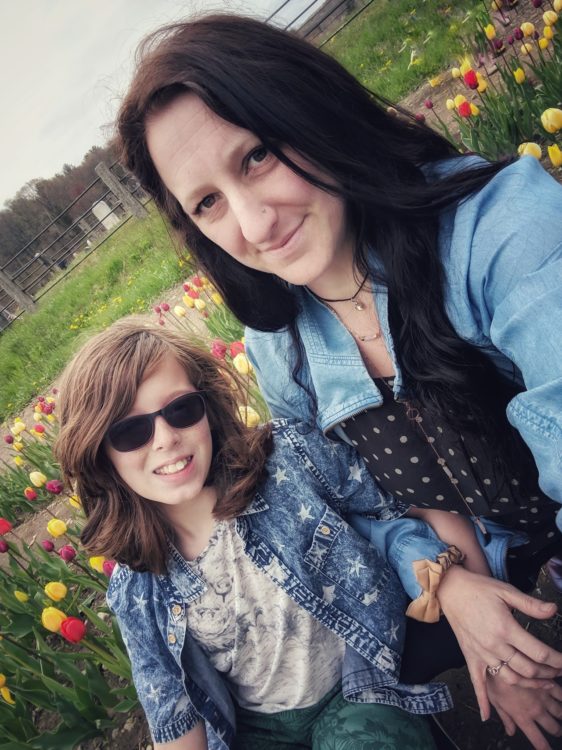 I know for certain that my adoption affects me daily, more on holidays and especially on Mother’s Day and Father’s Day. I want people to understand that just like a mental illness can manifest in different ways, so can triggers. Fear of abandonment and motherhood are just some of those ways. We often want to focus on the positive of being a mother, and there are so many to choose from. But, motherhood is emotional. It is personal and sometimes sad and heartbreaking. Every birth story is different. Every family dynamic is different. Motherhood is hard. But it is the most rewarding thing in my life. Even though it has shined a light into the darkness of my own birth story, it doesn’t mean I would have it any other way. Without the darkness, there can be no light. My light in my life is my son, my missing puzzle piece and my soul’s desire. I believe that through my mental illness and my adoption story, I have cultivated my own path to motherhood, one that is unique and beautiful.

JoyMarie Adamonis
•
Follow
joymarie-adamonis
Want more of The Mighty?
You can find even more stories on our Home page. There, you’ll also find thoughts and questions by our community.
Take Me Home