Get our most helpful mental health articles and tips delivered straight to your inbox. Subscribe to our Mental Health Matters newsletter.

It’s no secret that art can imitate life. Perhaps this is why we often find books, TV shows and movies so relatable. When searching for a good show to watch or book to read, we sometimes find ourselves searching for characters we identify with, watching how they go through experiences similar to our own.

This is something licensed clinical psychologist Janina Scarlet, Ph.D., creator of “Superhero Therapy” and author of Dark Agents: Violet and the Trial of Trauma, uses in her therapeutic work. According to Dr. Scarlet, in Superhero Therapy, we can view our present mental health struggles as our superhero “origin stories,” and through our healing process, we get to grow into the superheroes we were meant to be. She believes identifying with fictional characters can help us in mental health recovery.

“Most people have not been taught to name and understand their mental health experiences. Worse, many have been shamed for struggling with depression and other forms of mental health disorders,” she told The Mighty, adding:

Because fictional characters can help us understand our own stories (as well as help us overcome our struggles), we wanted to know what characters people with depression identify with. We asked people from our mental health community who live with depression to share one character they relate to.

1. Eeyore from “Winnie the Pooh”

“It feels like there’s a constant rain cloud following me like it follows Eeyore sometimes. Eeyore also just kinda goes with the flow/doesn’t care which a lot like how I am. Eeyore also has a lot of friends and around him but still seems to feel alone which is very similar to how I often feel.” — Jenna L.

“Her reality is filled with creatures and beings no one else seems to think are real. Sometimes she seems to be in a daze and comes in and out of the story. She can see the Thestrals of death. She has a perspective very unique to her experience. A quiet sadness always seemed to surround her for me.” — Emily S.

“My favorite novel is ‘Frankenstein’ by Mary Shelley and it’s because [I relate] to Frankenstein’s monster. People tend to take that the wrong way, I don’t think I’m a monster, but when you realize how excluded from life he felt, watching everyone around him ‘living’ and having no idea how that felt or how to even get there — it’s [like] watching these people [who] are the same as you, yet so different and having no idea how to fill that gap. The feeling of never being good enough, always misunderstood, only ever wanting to love, be loved, be included and be yourself, but having no idea where to begin.” — Emma Q.

“House automatically mistrusts people like I do and does things to purposefully push people away (even if it’s not on purpose — it’s like a reflex). He means well but almost always goes about it the wrong way. And as a way to numb the pain, he takes pain medications and I did that to mask the pain in my younger years as well. I could always resonate with House.” — Jolene R.

“She had some deep-rooted issues that caused her to be angry and try to cover up her sensitivity with toughness.” — Aspen O.

“I feel I most related to him because of his witty remarks. That is what I’m like around people when I’m depressed. I’ll always be the sarcastic smart ass so no one ever sees the real anxiety and depression that holds me down.” — Melina A.

7. Beatrice “Tris” Prior from “Divergent” series

“What really hit me were those simulation scenes, when she had to face one fear after the other. She has also experienced not belonging (being “factionless”) and endangering the people around her who support her in standing up against the norm… I identify strongly with her guilt and pain, but I also identify with the Dauntless Divergent who in the end, chose to continue the fight and sacrifice herself for the greater good.” — Anne L.

“It sounds silly, but growing up as a kid with depression symptoms, that was the only cartoon or TV show that was relatable. It expressed various real world situations and themes and how those directly affected people’s emotions. Arnold struggled with grieving the loss of his parents and moving on from that, but always did his best to help his friends and even strangers find the peace they needed to move on from their dark places, despite how tough things were for him. A lot of times, that’s what I do when I’m trapped in my own dark emotions.” — Sami S. 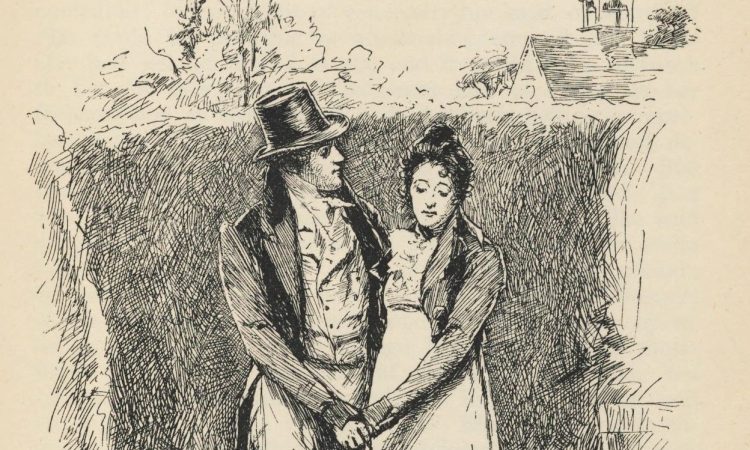 “I relate to Emma in Jane Austen’s novel ‘Emma.’ She is always trying to do things for others and fix things. She overlooks her own value and her own heart until she may have ruined things for herself. She overthinks everything and it nearly ruins her happily ever after. I see a lot of myself in those things.” — Brandi L.

“Give me Harley Quinn from ‘Suicide Squad.’ She went ‘crazy’ for the man she loves, but for me it’s more about her spirit. She fights for everything she has and for the love of the Joker. She’s unapologetically herself at all times and doesn’t make any excuses for anything. You either love her or you don’t. She’s my spirit woman.” — Doni P.

“Sounds weird, but Truman, from ‘The Truman Show.’ Remember the scene where it is raining just on him? Well, that’s how I feel some days.” — Liza L.

“The way the portrayed her depression with the passing months and blankly staring out the window. The way she tells Charlie she’ll go out with friends, acting semi-smiley until he’s out of view and her face falls. Feeling alienated from the people around you.” — Laura C.

“He struggles with anxiety and often has to overcome it to achieve his goals while he pursues a career as a professional figure skater. It really helps to remind me that it is possible to have anxiety and still pursue things in life that make you happy. I love this anime dearly and I am glad I can relate to such a character.” — Anna L.

“She helps other people and doesn’t always acknowledge and deal with her own emotions and issues. She puts other people first.” — Rebecca E.

“I could totally relate to pretty much everything he did and how he saw the world. The only solace I could take from his pain is that he started to become a stronger, better person by the end of the first season. As someone with anxiety, I can say that Clay was cut from the same cloth as me in many ways. The quiet, non-conformist, awkward, always anxious, empathetic young man who fit nowhere but was everywhere who was always struggling just to be himself. That was me. That is me. I’m still rooting for him.” — Rick B.

I didn’t realize it until just lately, but Rose from ‘Titanic.’ Not the ‘poor little rich girl’ as she stated from the beginning, but when Jack says, ‘No, no, that’s not what I was thinking. What I was thinking was, what could’ve happened to this girl to make her feel she had no way out?’ That’s how I felt… I never understood why I had such an attachment to the movie but it was more indirect than direct, as I’ve always felt I had to be a people pleaser even though it was hurting me.” — Jennifer N.

“Korra when she’s about to be crushed by Vatu, and Rava tells her she can keep going. And also when she’s poisoned by the metal in the show and she can’t walk anymore. [At] the end, a tear rolls down her cheek and it takes her years to recover. That show has been a great source of strength for me.” — Becky R.

“I relate a lot to Meredith Grey… She’s a fighter and she is very introspective. Someone who was broken — who came from a broken childhood and whose natural tendencies lead [her] to unhealthy relationships. But she seeks help. She works through her issues and you can see her character grow… small baby steps. But progress is progress — that’s me. I came into adulthood a broken person, but I continually work hard to overcome the things that hold me back. I am a fighter. I push on. And unless I talk about it, no one ever suspects all that is going on in my world.” — Sandra P.

22. Charlie Kelmeckis from “Perks of Being a Wallflower”

“Similarities with my own life and past. The flashbacks during the sequence of the movie and when making out with Sam really hit home. Also his experience in high school is very true.” — Terry W.

“I feel like she has this constant struggle to deal with her issues the best way she can, even though it may not seem like the ‘right’ way… but she’s trying to figure it out the best she can.” — Kat G.

“For me, having depression is like someone else constantly whispering around about how bad I am at living, how boring or lazy I can be. It’s feeling tired all the time and being amazed [at] how much my mood [and] my lifestyle have changed in a matter of months since I got diagnosed. It’s the sensation of wanting to be someone else (tougher, smarter, fitter, healthier), just not being me. When feeling numb, a famous ‘Fight Club’ quote rounds my mind: ‘I am Jack’s complete lack of surprise,’ that’s how I feel.” — Diana L.

“Weird but [I relate to] The Hulk. Feel OK but it takes one thing to turn into someone I don’t recognize.” — Sam L.

“Her mood swings radiate within me, how much she has suffered for such a young person with the loss of her husband and the guilt she carries. I myself feel guilt often. But she wins the love of someone who understands and accepts her for who she is.” — Lora R.

“She always seems to have her stuff together, but when you learn her back story, she went through hell, and still comes out victor in the end. I’ve always admired her perseverance and give no f*cks attitude!” — Dakota J.

“A good man at heart, who just wants to be seen for the man he is inside. Who dreams about being more, to be more himself, to make more of himself — but is often too scared to try…” — Pajo L.

“Dexter Morgan from Showtime’s ‘Dexter.’ Without all the killing. Lol. He refers to his illness as his ‘dark passenger’ and accepts he will never be rid of it. He keeps his dark passenger a secret and finds ways to keep it from taking over and ruining his life.” — Colleen D.

If you are struggling with depression, you’re not alone. Though fictional characters can be helpful for giving us words to describe our mental health struggles, it’s important to reach out for help when you need it. You deserve the support you need.

“If you have ever struggled with depression, anxiety, trauma, or another disorder, know that you are already a superhero,” Dr. Scarlet said. “Your story and your experience can help someone else who might be just at the very beginning of their heroic journey. You are the Chosen One for this quest. It has to be you. Capes are optional.”

What fictional character do you identify with? Let us know in the comments. 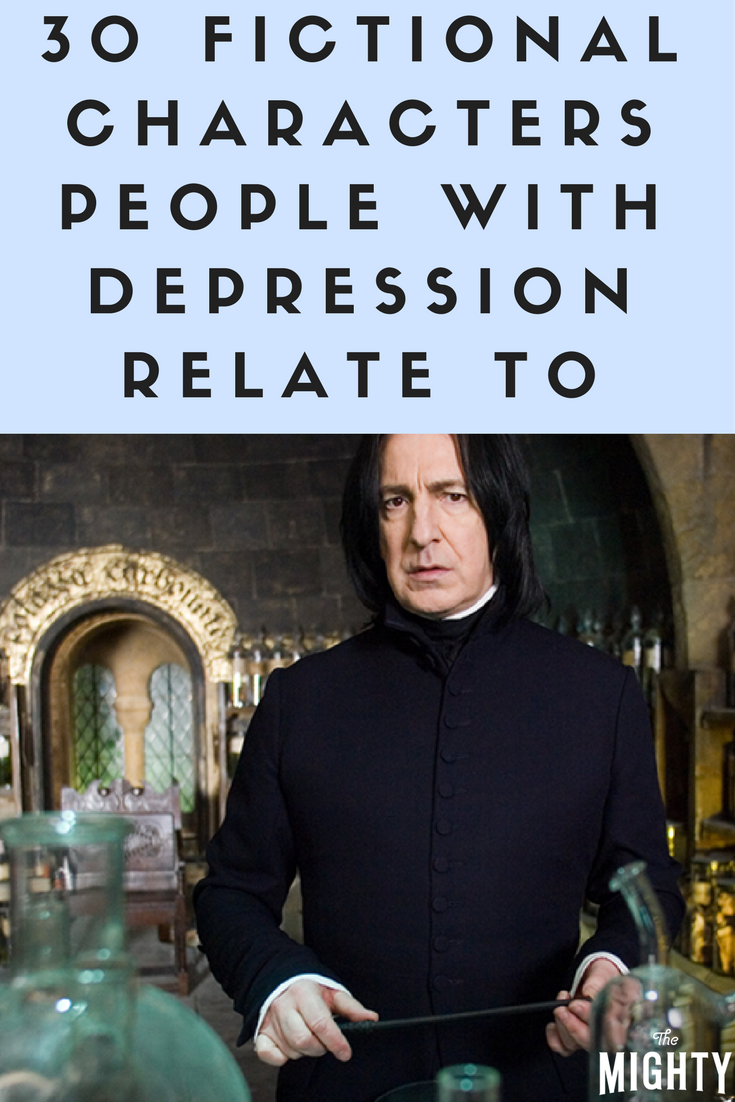