While anxiety and depression seem to exist on opposite ends of the emotion spectrum, more often than you might think, they co-exist in the same mind. Out of those diagnosed with depression, 85 percent also have generalized anxiety disorder. So in some ways, talking about one without the other is only acknowledging half of an individual’s mental health experience.

1. “For me, it’s a vicious cycle where. During the day, I’m completely exhausted and can’t seem to get anything done, and then I lie awake all night worrying about all the things I didn’t do…” — Karen R.B.

2. “It’s two voices inside of you, both with totally different opinions. It’s anxiety screaming you have to get up and do stuff or you’ll fail in life, and then depression on the other side telling you it all doesn’t matter anyway and you should stay in bed all day. It’s being super stressed out about everything all the time but also not really caring about anything at all. It’s two totally opposites pulling your mind apart, and that’s really exhausting.” — Amy H.

3. “Depression is not caring about anything at all, and anxiety is caring too much. And having both, ironically, is a nightmare. You want to leave everything behind and sleep, yet you overthink anxiously about everything you didn’t or have to do.” — Ismail T.

4. “For me, my mind is split into two halves. The anxiety half worries constantly about every aspect of my life (from health, image, to relationships) where the other half is too exhausted and worn down to do much about it.” — Dominick L.

5. “It’s like researching new tires and weather patterns for hours, going for a drive and getting stuck in the mud or getting hydroplaned off the road. Then silently hating all of the choices that led you to this car on this road. Then repeat, daily.” — Lori S.

6. “Breathing through a coffee stirrer. A daily battle against yourself… a desire to live yet at the same time the desire to stop.” — Tara K.

7. “Constantly being held back from things you really do want to do. Depression says ‘don’t go, you don’t have enough energy and don’t feel like socializing’ and anxiety says ‘what if you don’t go and people get upset, or if you do go what if something sends you into panic mode?’” — Lindsey W.

8. “It’s no motivation to do anything, followed by the fear of failure because you aren’t doing anything. It’s both not caring at all and caring all too much. It’s a vicious cycle of hell.” — Desi H.

9. “It’s like having two devils on your shoulders. One tells you that you don’t care or feel anything. The other tells you to overthink and worry about absolutely everything.” — Carleen W.

10. “For me it’s like a roller coaster ride. The anxiety is the ride up the hill, the constant wondering what’s on the other side. Will my seatbelt hold me? Will the tracks fail? Why is it creaking and shifting and the screams of everyone? It’s all rushing, and panic is starting to come over me. Then the free fall of depression; it dips so fast. The fall is so hard. I’m going down faster and then I’m ripped side to side and upside down. I’m crying in fear of continuing on like this. It all happens so fast. I see everyone around me. They are walking and talking and carrying on normally and I want to reach them, but I can’t. It doesn’t stop. It just keeps going. Around and around and around.” — Chip M.

11. “To me, it’s like covering your face with some kind of invisible mask. I have to show other people that I’m fine, completely functional and capable of finishing all the tasks, while the reality is I’m completely a vulnerable person who sometimes has to lock himself in a [bathroom] just to make sure the mask he wears doesn’t break loose and expose his true self.” — Andre D.

12. “Either I’m wandering in a fog where time is meaningless and emotions are abbreviated, or I’m thrown into an unpredictable, terrifying instant where I’m drawn and quartered by the most inane indecisions.” — Lisa L.

14. “It’s a tug of war. One minute, your anxiety skyrockets, and the next, depression hits you in the face. I feel glued, stuck, ripped in two. It’s an exhausting cycle, especially when I crash into an episode. All the crying, overthinking, the feeling of being sucked into an abyss I can’t escape from, the constant mood swings, the panic attacks, the suicidal thoughts — it’s a draining feeling that makes me wonder if this life is worth living at all.” — Noelle M.

15. “It is two forces in ‘coopetition’ with each other… they both remind me at times I can’t do anything right, I am faking my way through (and failing mightily at times), and then they will turn on each other over some minute details. They’re frenemies with me stuck in the middle.” — Annette M.

16. “It’s like you’re a living paradox; you feel both too much and nothing, you’re exhausted and high strung, you are lonely but afraid of people, you are being torn apart between the fear, despair, pain, emptiness and soul-rending apathy all at once. And the worst part is both sides tell you no one else cares or needs to know.” — Opal S.

17. “Some days are tolerable. Other days, I can’t function. Both of them are always there… but, it depends on the way the wind blows, which direction the sun sets, the temperature of the day, is it raining or sunny?” — Hanni W.

18. “It’s a never-ending rollercoaster. You feel exhausted all day, you can’t concentrate or have enough energy to do anything. You worry all the time, the voices in your head never stop screaming at you. You stress over every single detail every single minute of your day and yet you sometimes can’t even care. It drains life out of you.” — Mariví R.T.

19. “Anxiety — it’s like being on a rocking chair that’s tipping back, that feeling of dread that it’s going to fall back, but it doesn’t. It’s worrying and overthinking simple things. Sometimes it comes out of nowhere, even when my whole day has been positive and I have nothing to worry about, I start to worry about nothing. Depression — it’s having this negative voice telling you to not do anything. It makes me question every single thing I know, and just feel constantly lost and without hope.” — Ashley M.

20. “It’s like having two different people inside of your head. You have the anxiety that makes you panic about the smallest things — like the house being dirty or being late — and it makes you hate yourself. But you also have depression that tells you there’s no point doing anything because it’s all worthless anyway, so you stay in bed. But while staying in bed you’re also freaking out about everything else going on, you just don’t have the energy to sort it out.” — Alexandra J.

21. “Your mind playing tug of war with your body. You constantly question your abilities, you are stuck in a fog of negative numbing thoughts, but on the other hand the anxiety makes you always on your toes. You feel like a victim on puppet strings being pulled from one end of the scale of feeling dull and low to the other end when your heart is sprinting 100 miles an hour in panic just because somebody looked at you.” — Vanessa W.

22. “It’s like sitting in the middle of a motorway with an articulated lorry ploughing straight towards me. My mind tells me the vehicle’s breaks will fail, that the driver isn’t paying enough attention to notice me and that I’m going I’m going to die. I panic, my throat closing and my chest unable to expand for fear of the impact, the pain, a potentially agonizing death as my broken body fails. Yet at the same time, another part of my mind whispers no one would miss me anyway, In fact, they’d welcome my demise. The thought drains me of the strength and motivation to stand, never mind run. And so I sit there, anxious and resigned all at the same time.” — Angela M.

23. “It’s sort of like one side of your brain begging you not to get out of bed with chains, meanwhile the other part of you barks like a military sergeant for not getting out of bed, as well as other people in the world and guilt-tripping you, destroying your confidence.” — Joy L.

24. “To me it’s like being a runner whose legs are broken. You want so badly to do what you love, it’s all you think about, but you just can’t. You’re broken and all you’re left with is memories of how you used to be able to run, but now it seems like you never will again.” — Kimberly S.

25. “It’s the feeling of wanting to be alone but feeling lonely at the same time. The anxiety causes my heartbeat to echo in my ears, and my depression takes my brain to a dark place where all I can do is either put myself to bed or cry on the floor with my dog.” — Renee M.

26. “No matter what I accomplish, it will never be good enough for my inner critic. I slowly dissolve as my feelings of worthlessness and failure envelop me. I pull away and isolate myself from everyone. There is just emptiness.” — Brett L.

27. “I see it as my younger self playing hide and seek with imaginary friends. No one else sees it, but I know they are there. And it’s an absolute vicious cycle of wanting to change the %%rssc22YZDp%%, but depression taking over and [stopping you], causinanxietyanxiety… you feel frozen, watching your life pass you by as you envy everyone around you. Just wishing you could be ‘normal’ again.” — Cassandra B.

28. “%%WTpXD0d1Yk%% and depression makes me feel as though I’m stuck in tar and can’t get out, even though my heart has so many dreams and aspirations.” — Samantha M.

29. “The overwhelming dread and anxiousness of everyday tasks, but also the apathy to not complete any of them. So basically you lay in bed with no motivation or energy to move, but internally agonizing about everything you’re not doing and hating yourself for not being able to do anything.” — Alex U.

30. “The inability to make a decision because you feel completely numb, but if you’re capable of choosing you are overwhelmed with guilt and anguish that you made the wrong choice. The feeling of vibrating at a high frequency then going completely numb.” — Ashley B.

31. “Feeling like I can’t move fast enough and my brain is zipping along at 100 mph but also that there is a rope around my middle that is being pulled from behind, stopping me from moving.” — Anna M.

32. “Exhausting but liberating. I find that everyday life with depression is a day I fight. If I don’t fight it will overtake me. I’m not allowing this to take my dreams away from me! It gives me strength and motivation to work harder. There are times where I feel so debilitated and there are times where I feel so strengthened by it. We walk hand-in-hand every day, we are partners but we are not one.” — Vicky B. 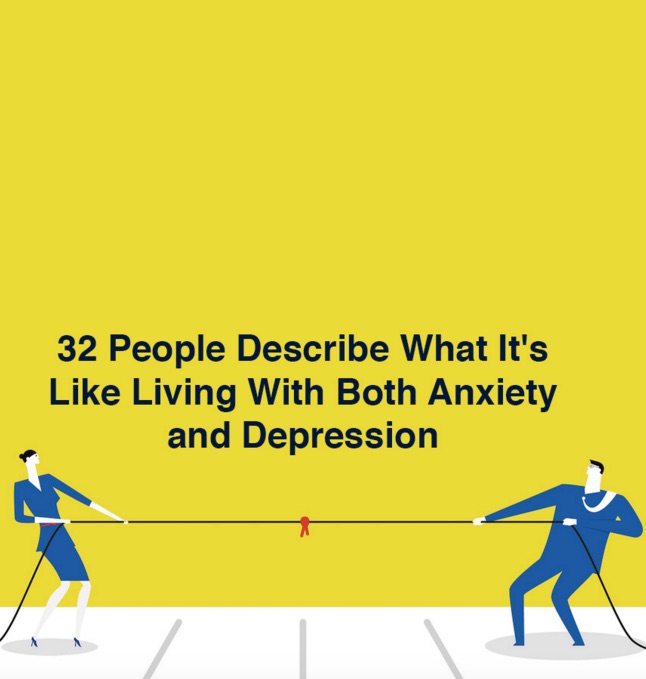