To the Parents With Kids Who Pick Their Noses (Hint: That's Everyone)

I have struggled with dermatillomania since I was a child but only realized it had a name, and was something others struggle with, within the last two years. Dermatillomania is a body-focused repetitive behavior (BFRB). I remember I was at a dermatologist having a regular mole scan done for any skin irregularities. My dermatologist lovingly asked me if I’d like help with my hands. I looked up at her, surprised by the question. “What do you mean?” She then described to me that there are professionals out there who can help me cope with my constant skin picking. I felt embarrassed. I told her I would think about it but that my picking didn’t really inhibit my regular day-to-day life so I didn’t think I really needed any help.

When I think back on that statement, that my picking didn’t really inhibit my regular day-to-day life, it wasn’t entirely true. I can remember biting my nails as a kid and being told I was going to mess up my teeth doing that. I later got braces at age 19 for a severely mangled smile. I remember being in college and having bitten the nail and skin so far down on my fingers that I would search the internet to find out if a human could actually destroy their own finger prints by chewing on them too much. I also remember picking my nose a lot as a kid. And being told I would eventually grow out of such a nasty habit.

After graduating college I moved to dry desert climate. I’d moved to this region from a humid environment where I’d lived for 16 years. And my nose was not prepared for the lack of moisture it was about to endure. Hard nasal mucus (or dried nasal mucus) formed in my nose. Or as I called them “rock hard boogers.” This condition causes severe discomfort, sometimes pain, as these rocks lodge themselves in your nose and become attached to the inner lining. As a skin picker, I would dislodge them daily (sometimes more). Dislodging creating gushing nose bleeds and short term relief until the rocks returned. Eventually, having a nose bleed two to four times a day, burning through tissues and leaving the trash can under my desk at work full of bloody tissues resulted in the janitor of my employer approaching me and telling me he was concerned for my well-being because he emptied my trash can every night and saw my bloody tissues.

When I reflect on the embarrassment I felt in the dermatologists office, it comes rushing back quickly to me when the janitor is expressing his concerns about my health.

I start talking to my general physician about the rocks. She told me to go buy some saline solutions and creams at the drug store. So I started smearing goo on top of rocks in my nose and saw no improvement. I started searching the internet for phrases like “can I pick a hole through my nose?” or “holes in septums from nose picking.” The internet is generally a bad place to find medical diagnosis. However, I became concerned when I found out  it could happen. I went to my general physician again, insisting the internet told me I could pick a hole in my septum. She told me the only time she’d ever seen anyone make a hole through their septum is from heavy cocaine use. Disclosure: I don’t do any drugs. And my medicine cabinet consists solely of aspirin and Band Aids (all this skin picker needs).

Seven months later, in July 2015 during a camping trip for the 4th of July, I discovered I could whistle through my nose. After about 30 minutes of thinking this was a cool party trick, panic set in. I searched the internet for “symptoms of a hole in your septum,” and I was exhibiting the symptoms I found. I contacted an ear, nose, and throat surgeon and had a consultation.

Cause: picking my nose. 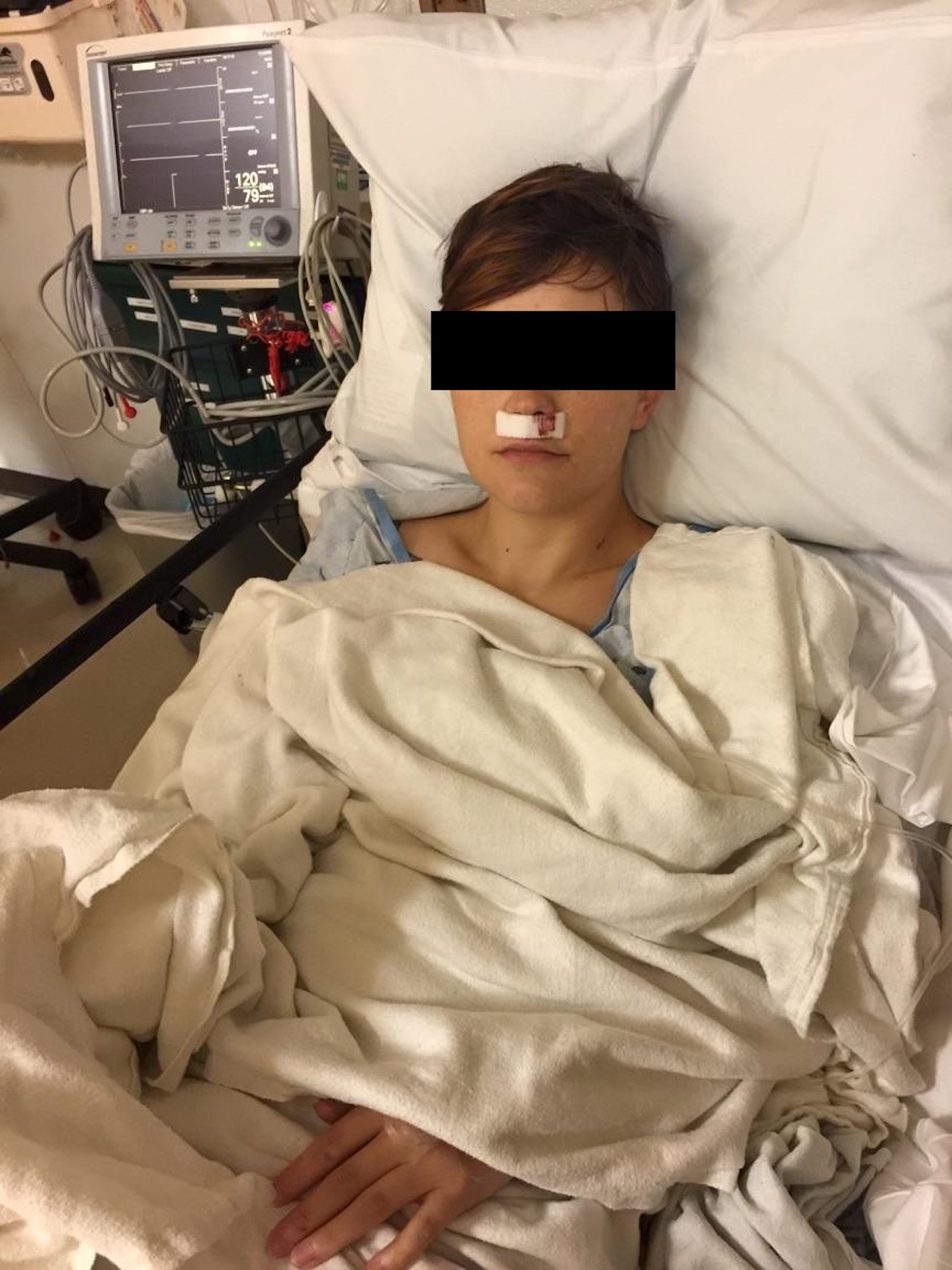 Today I reflect on this because in October 2015 I had surgery to repair the perforation. It was extremely painful and involved lots of constant nose bleeds for four weeks, throwing up from the pain medicine, and sleeping sitting up so I didn’t choke on the blood draining from my nose into my throat.

October 7, during BFRD awareness week, is the anniversary of my surgery. Unfortunately, in January 2016 the skin graft was rejected by my nose. I have surgery scheduled for October 31, 2016 to try a second time to patch the hole in my nose. This time it will be a graft using my own skin (taken from my scalp) rather than cadaver skin (which was rejected last time). It will be more aggressive than the first surgery, including staples in my head, pain eating (because the graft will be taken from above my chewing muscles), bruising to my face, and stitches under my nose (as they will have to pull back the skin this time). One of many embarrassing moments in this experience was when the new surgeon (who will perform my surgery) told me he needed me to submit to a drug test and to pee in a cup. I was shocked. He did not perform my first surgery, and he only performs three to four septal perforation surgeries a year. He told me the only times he sees septal perforation surgeries fail is when the patient is a heavy cocaine user as cocaine use damages the blood vessels in your nose, making the healing process less successful. Here I am, being tested for cocaine use, and thinking, “Sorry doctor, you’ve got me all wrong, I’ve just been picking my nose the last 28 years of my life.”

The pain and the bruising will go away quickly. The longer healing process is going to involve seeking professional psychiatric assistance in beating my skin picking disorder so my nose doesn’t fall apart again.

Two years ago in that dermatologist’s office when I shrugged off getting help for my skin picking disorder, I never could have expected I would be here today — here writing this blog post to educate parents that some kids never grow out of picking their nose. And if you can see the signs early enough you can get them help addressing their behaviors earlier in life. Not all doctors are experienced in identifying this disorder. If they were, I might have received the help I needed from my general physician when I expressed my concerns about picking a hole right through my septum (only to be told it would never happen). If your kid is picking his or her nose longer into adolescent years than you would expect, start watching for other signs such as picking at hair, picking at scabs, biting their nails, or other symptoms of BFRBs.

April D. resides in California. She is still discovering the world of support for BFRBs and learning to be open about her condition to people. She suffers from both dermatillomania and rhinotillexomania. She is hopeful for the future of her condition, and looks forward to helping educate others about its existence.

Save
Conversations 44
We use cookies and related technologies to help identify you and your devices, enhance your experience and conduct advertising and analysis. By choosing "Accept", or by using this site, you are agreeing to our use of cookies. You can read more about how The Mighty uses cookies in our Cookie Notice.
Manage Choices
Accept