There’s an advert circulating the diabetes community based on sugar, sweets and the risk of amputation. The ad doesn’t intend to be harmful — it suggests the risk of overconsumption of sugar throughout your life leading to type 2 diabetes (or rather that’s what it implies). However, it doesn’t explicitly state that and that’s harmful. It’s unclear exactly where this image came from. 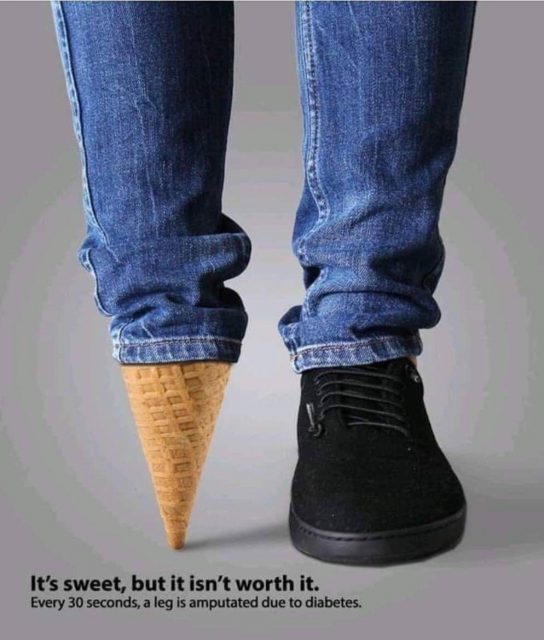 Two main types of diabetes exist: type 1 and type 2, but most of the time these are categorized into one. Type 1 is an autoimmune disease that occurs in individuals when their body’s immune system accidentally destroys the insulin-producing cells, and can be managed with regular monitoring and insulin therapy. Type 2 is caused by factors including genetics and lifestyle and can be managed through diet, exercise, insulin therapy and medication.

I have been a type 1 for six years now and the amount of times I’ve seen jokes and memes about diabetes and eating too much sugar is staggering. Which is why the advert annoyed me, because diabetes is not always caused by eating too much sugar. Media content and the general lack of awareness and knowledge create the misconception that sugar causes diabetes. It’s infuriating to me because I have gained a wealth of knowledge about my condition since diagnosis. I understand my type as well as type 2 and try educate others about them both. I’ve had family members, friends and even random strangers ask if it’s because “I ate too much sugar as a child.” Perhaps I did, most kids do, but it’s not why I developed type 1 diabetes. The true cause of the condition is unknown. And I want to scream and shout about it all the time.

It’s a matter of stating which diabetes you’re talking about, or just not making jokes about diabetes in general because it hurts someone. It hurts because I work so, so hard to maintain my health and blood sugar levels when my body doesn’t want to cooperate. It makes others believe the solution is to eat better, exercise and implement some superfoods into my diet. While eating healthily and exercising is an important aspect of managing type 1 diabetes, it won’t get rid of the condition. People need to understand that — when you’re about to recommend a new method of managing diabetes, it may mean nothing to me.

I can’t stress enough how frustrating it is for people to misunderstand diabetes, which is what I think the advert is doing. It’s focusing on one element of the condition — the risk of amputation if blood sugar levels are uncontrolled. And it’s playing into the “you ate too much sugar” discourse that isn’t true for all cases of diabetes.

And I get it, if I’m honest, because prior to being diagnosed in 2013 I knew nothing about diabetes. I’m not sure I ever heard anyone talking about it, we didn’t learn about it in school and I didn’t know anyone who had it until I did. So I understand why there’s a misconception. It’s because of a lack of knowledge and the involvement of the media writing misguided articles. Writers, researchers, medical professionals and anyone else seemingly fit to discuss diabetes need to be receiving the right knowledge and education about the condition before they speak about it. And if you’re going to make a diabetes joke (I wish you wouldn’t), be considerate of those who can’t manage their condition by changing their diet and exercising more. I’ve seen people online make jokes about diabetes and how an extremely sugary dessert is the reason behind it and I’ve unfollowed them. And maybe that’s petty or childish of me but when it’s constant it gets very, very annoying.

My condition is not a punchline.

I'm 23 and in my final year at university. I like reading and writing children's fiction. I love running, naps and food.

brianna-henderson
Want more of The Mighty?
You can find even more stories on our Home page. There, you’ll also find thoughts and questions by our community.
Take Me Home