Mike’s Pig Pen is getting some heat for an insensitive sign hung above the bathroom in its restaurant in Watertown, New York. 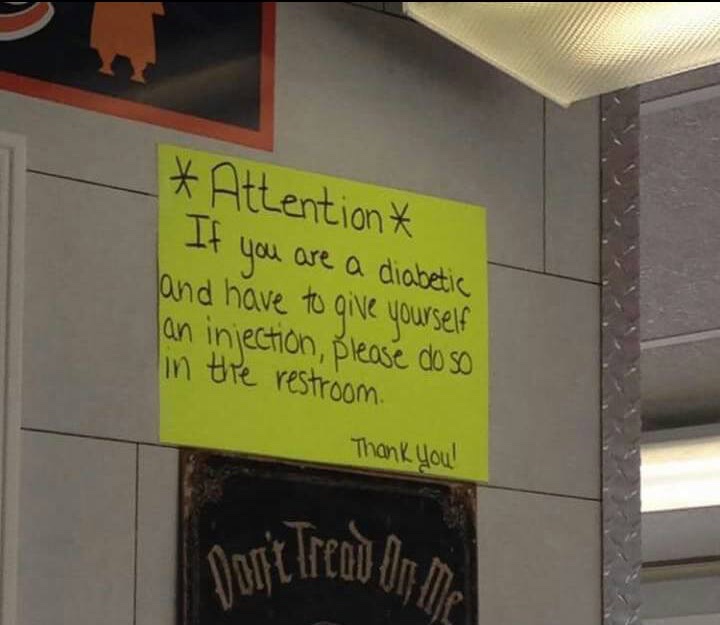 Attention. If you are a diabetic and have to give yourself an injection, please do so in the restroom. Thank you!

People with diabetes – both type 1 and type 2 – often need an injection of insulin before eating to control their blood sugar.

Patrons of the restaurant are outraged calling the sign “disgusting” and “discriminating.”

“I’m terrified of needles, can’t be in the same room as them and watching people give themselves injections freaks me out… With that said, I turn away or I leave, I would never expect a diabetic to leave the room and go inject themselves in a filthy bathroom due to me being uncomfortable. This is seriously wrong.”

Another commented demanding an apology: 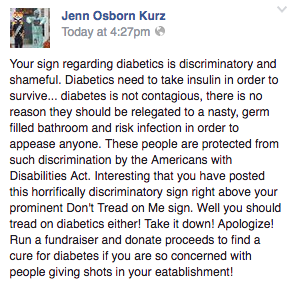 “Your sign regarding diabetics is discriminatory and shameful. Diabetics need to take insulin in order to survive… diabetes is not contagious, there is no reason they should be relegated to a nasty, germ filled bathroom and risk infection in order to appease anyone. These people are protected from such discrimination by the Americans with Disabilities Act. Interesting that you have posted this horrifically discriminatory sign right above your prominent Don’t Tread on Me sign. Well you should tread on diabetics either! Take it down! Apologize! Run a fundraiser and donate proceeds to find a cure for diabetes if you are so concerned with people giving shots in your establishment!”

And another shared his perspective as a father with a daughter who has diabetes: 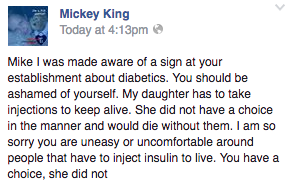 “Mike I was made aware of a sign at your establishment about diabetics. You should be ashamed of yourself. My daughter has to take injections to keep alive. She did not have a choice in the manner and would die without them. I am so sorry you are uneasy or uncomfortable around people that have to inject insulin to live. You have a choice, she did not.”

The Mighty reached out to Mike’s Pig Pen for comment and has yet to hear back.

I put a sign up because I had a person come in and give themselves a shot and people sitting near were put out by seeing this. the play is very small there really is no private place to do the shot. I like all walks of life!!! I have good friends that are diabetic. This whole thing was taken way wrong.Didn’t put sign up to make people not like me. This is the only way I  make my money.