Sometimes the news isn’t as straightforward as it’s made to seem. Erin Migdol, The Mighty’s senior editor, explains what to keep in mind if you see this topic or similar stories in your newsfeed. This is The Mighty Takeaway.

There’s a saying in medicine that “when you hear hoofbeats, think horses, not zebras.” It means when you’re trying to figure out a patient’s diagnosis, think of common illnesses first, rather than conditions that are more rare and theoretically less likely to be the diagnosis. It’s a theory that can work in guiding doctors to the correct diagnosis — but it’s far from foolproof. And when it fails, the results can be deadly, leaving people with chronic illnesses vulnerable to dangerous medical care.

The story of Rosie Umney, a 15-year-old with type 1 diabetes who died of diabetic ketoacidosis hours after a doctor diagnosed her with an ear infection, should serve as a cautionary tale to any medical professional looking out for “horses” but not “zebras.”

What advice would you give Beth?
Answer this Mighty Member’s question now: 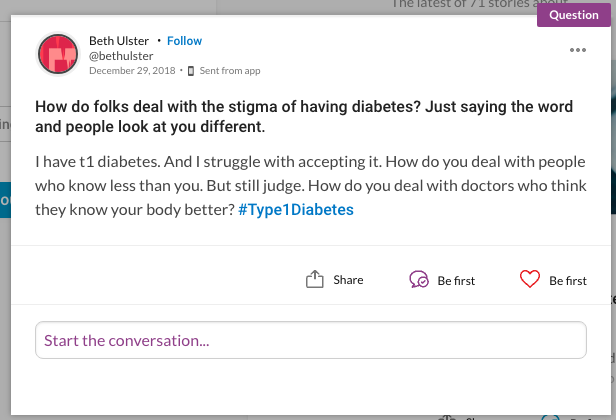 As reported by Kent Live on Wednesday, Umney began feeling sick on July 2, 2018. She went home early from school, and her mother and grandfather took her to an urgent care after she complained of abdominal pain, reflux and was hyperventilating. Umney’s mother and grandfather told the doctor, Sadaf Mangi, they had checked her blood glucose and the results were normal. Mangi diagnosed her with an ear infection and sent her home with a prescription for medication.

Ask questions and get support from other people with diabetes. Follow Diabetes on The Mighty to connect with a community who truly “gets it.”

Later that night, Umney’s family heard her fall off her bed, prompting them to call paramedics. The paramedics checked her blood glucose on their own machines, which indicated that she did have a high reading and thus her own device had likely been faulty. Despite being rushed to the hospital, she died early that morning.

At an inquest at Canterbury Magistrates’ Court on Wednesday, Mangi said she did not know the warning signs and recommended action to take in children with type 1 diabetes. She said she discarded the idea of diabetic ketoacidosis when Umney’s family said her reading was normal and attributed her symptoms to an ear infection and anxiety.

There are a number of ways Umney was failed in her care. But one aspect that stands out as potentially avoidable is the fact that the doctor was so quick to assume Umney was experiencing an acute illness instead of investigating deeper.

For people with chronic illnesses, the incident may sound sadly familiar. When a child (or adult) complains of pain, fatigue or other invisible symptoms that can’t immediately and obviously be diagnosed (for example, a broken bone), doctors and even parents in some cases may chalk it up to simply “growing pains” or “the flu” or some other everyday acute condition.

But as Umney’s case points out, sometimes the hoofbeats aren’t horses. Sometimes it really is a zebra. There’s Selma Blair, who was finally diagnosed with multiple sclerosis after 15 years of symptoms no one took seriously. There’s the viral story written by a man who witnessed his wife being dismissed by ER staff while she was having an ovarian torsion. There are the millions of women who are told their pain is “just a bad period” and have to search as many as 10 years to learn they actually have endometriosis. (And yes, there is often a gender component to this issue as well.)

As Mighty contributor Lisa Prins pointed out in her article, The Exhaustion of Fighting With Doctors for a Diagnosis:

Patients are often presumed healthy until they “prove” otherwise. Because they are presumed healthy, they have to jump through hoops just to get a test done or get a referral to a specialist. It’s a never-ending fight to be treated with dignity, caring and respect.

Chronically ill people rely on medical professionals who can tell the difference between horses and zebras — or can at least recognize when more investigation is needed. They require doctors who listen to their patients, are willing to admit that the “obvious” diagnosis may not actually be the right answer and are willing to keep looking for that diagnosis that is correct. They need doctors who are educated about chronic illnesses — who know the diseases that exist, how they present and how to distinguish them from other diagnoses.

As long as there are medical professionals who don’t do the work, who settle on the first explanation they see even if it doesn’t quite fit, we’ll continue to have devastating, even deadly outcomes like Umney’s. People with chronic illnesses deserve better.

Follow Diabetes on The Mighty to ask questions and get support from our supportive community.