People With Disabilities Are Allowed to Be Angry

As a person with a disability, have you ever been told to look on the brighter side of things? That someone else has it worse than you? You’re not alone, and your feelings are valid.

I’ve been feeling very angry lately about the world. I’m sick of people’s ignorant comments, I’m tired of the stares, and I wish people would just understand what it’s like living with a disability, what it’s like having mental illness. In March, I had an article I wrote published about a police officer harassing me about my disability placard. I had so many comments, some good and a lot of hate. A couple particularly got to me. They said things like, “you need to write about the good,” and “you are so full of spite and anger, you need to spread positivity.” Here’s the thing, I think it’s great to be positive, but spreading positivity doesn’t start change. Being your inspiration porn is not my goal.

My mother gave me some interesting advice not that long ago. She told me to stop caring what others think. I responded that it’s an easy thing to say, but isolating when you put it into practice. But then she told me, “Stop being silent, piss people off the way they piss you off. When someone says something ignorant, correct them. Be the activist you want to be even if it means they don’t like it. At least you will have said your piece and maybe they will have learned something.”

Here’s what changes things, in my experience: advocacy, getting angry when unjust things happen and talking about them. Being upset about a police officer who treats you rudely, doesn’t apologize when he is in the wrong and writing about it can change things. Getting angry and starting a movement changes things, like @rkamen and @im_still_here_sgb did when people were and are still unnecessarily leaving their homes and putting high risk and vulnerable people’s lives in danger from COVID-19. Or when fashion labels like Kimhekim think it’s OK to exploit those with illnesses for gain and people speak out.

Don’t get me wrong, this world needs positivity, especially during hard times. But I’m not going to sugarcoat the tough shit. I’m so sick of disabled people only being shown in the media if it’s some kind of uplifting story to warm all the feelings you have in your heart. But here’s the thing, to so many people, we are a forgotten minority. We are allowed to be angry and pissed off. Don’t let anyone quiet your voice or tell you to be positive about injustice. Get pissed off. 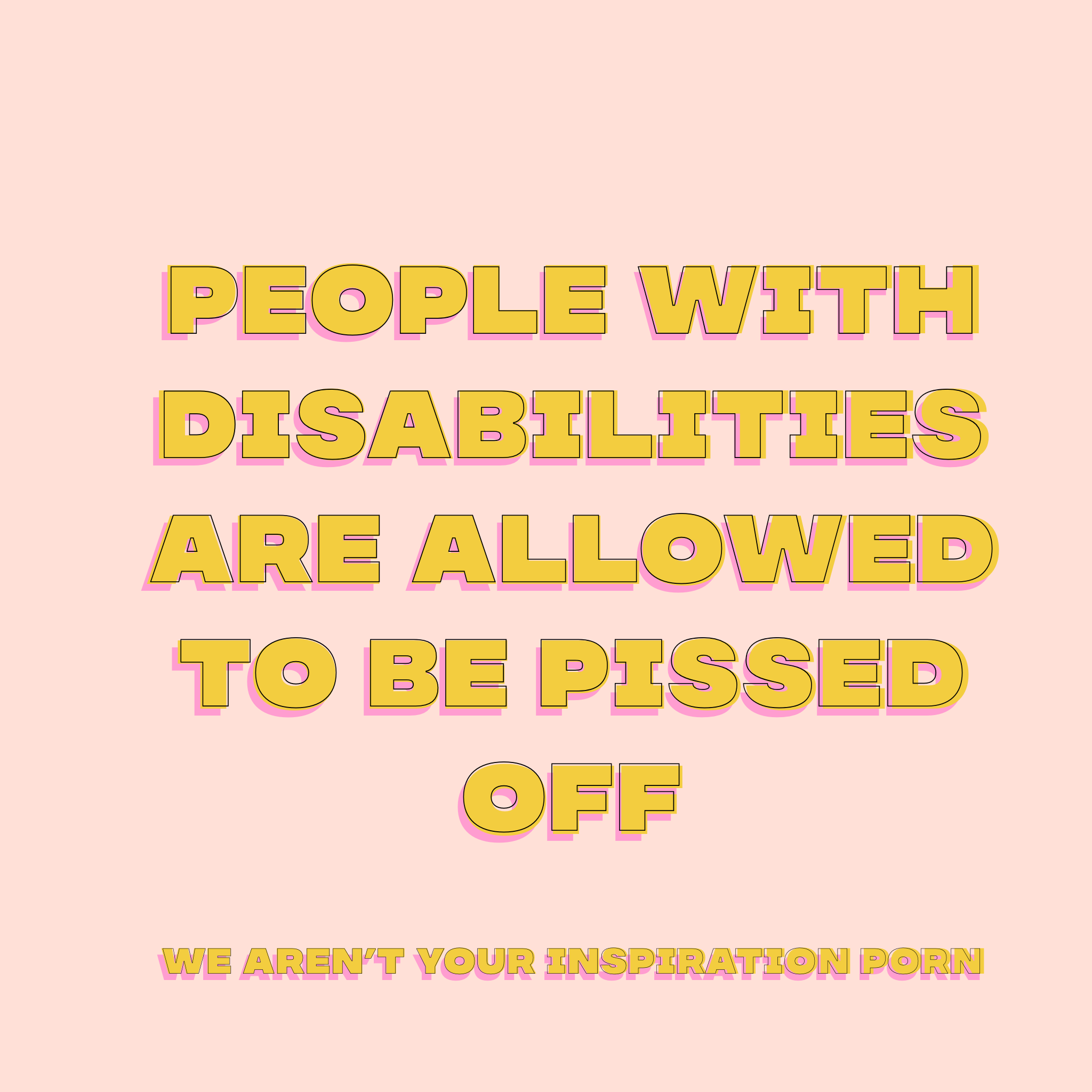 Amelia Blackwater is a chronic illness and mental health writer and poet. She graduated from CSUSB with a BA in Creative Writing in 2011. She finds therapy in writing about her experiences living with CHD, migraines, multiple mental health problems including C-PTSD, Anxiety Disorder, OCD, and recovered Eating Disorder She recently is on the mend from her third open heart surgery. Follow her journey on Instagram @ameliablackwater