For anyone who needs to use accessible parking, it is difficult (and frustrating) when you see people without a disability placard or license plate illegally parking in one of these spaces. It is especially frustrating when the people parking there claim it will take them “just a minute” — as if accessible parking was designed for convenience rather than need.

MaryEllen Pollard, a mom from Alabama, has taken matters into her own hands after she faced this issue repeatedly at her child’s school. She created her own “ticket” and uses them whenever she sees a car parked without a permit placard or license. 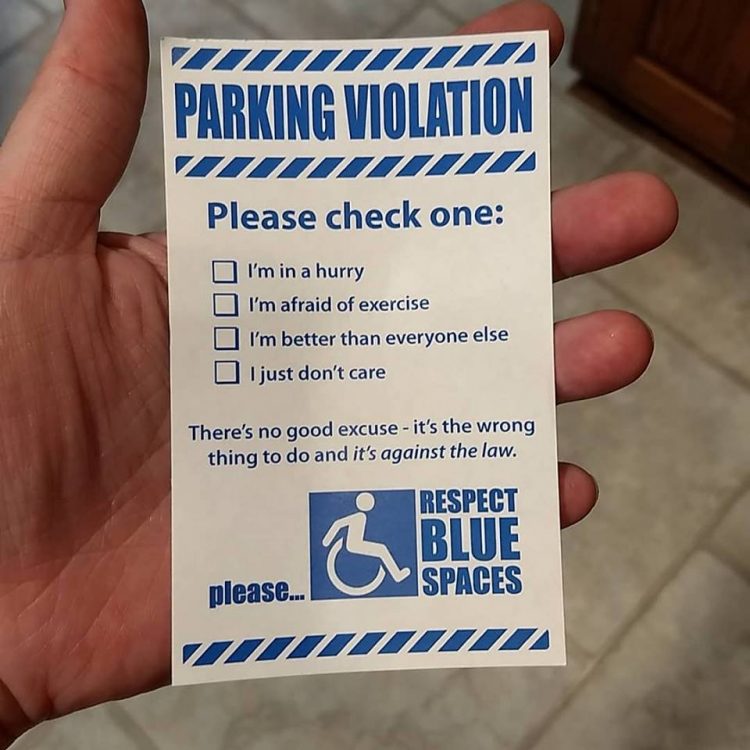 Pollard told The Mighty this started about five years ago when her son began preschool and had just received his first disability permit. “I honestly assumed non-disabled people would never park in the blue spaces,” she said. “I learned quick I was wrong.”

Every morning when she arrived at school, all the accessible parking spots were taken by non-permitted cars. This meant she had to find a regular space that provided enough room so she could get her son’s wheelchair out of her vehicle. Often times, finding a space that worked for them resulted in her son being late for school.

Pollard said she once saw a police car parked in an accessible parking spot, and she snapped a picture and posted it on social media saying, “I wish I could ticket this car.” That idea made her do a Google search to see if there was any type of “ticket” she could create for instances where she faced this situation. “I wrote down the usual excuses people gave me and came up with my own ‘ticket,’” she said, “I wanted it to look like a real ticket as much as possible so it would get their attention.”

Pollard’s goal is to shock people to the reality of their actions affecting the people who need the spaces. “Everyone always says, ‘I was just going in for a minute.’ But they never took the time to think that their minute meant families like mine had to wait for them,” she said.

Not all people have responded positively. “I’ve gotten stopped a few times and even had a lady throw [the ticket] at me and cuss me out,” she said. “But to me, that just proved how guilty they felt.” For Pollard, these tickets are her little way of being able to say something quickly and to the point.

She’s certainly not the only person who has had to confront people for parking illegally. We asked parents in our community and our disability community how they have dealt with this issue, and this is what they had to say:

“If they aren’t around for me to ‘chat’ with them, I have stickers that were provided by the disability association, and I stick it on their windscreen in full line of their view to drive.” — Melissa B.

“I take a photo, call our local non-emergency police number, and just walk away. We have a local offenders Facebook page, but I am even nervous posting there. I used to have business cards that had the law on them and wrote a passive-aggressive, ‘friendly reminder — your placard wasn’t displayed — didn’t want you to get a ticket!’ and put it under the wiper. I got nervous about being caught and causing a confrontation since I was touching someone’s property. I don’t do that anymore. I have asked a few people if they had a placard, and they always cursed at me or just didn’t care. So I stopped because I just don’t know what kind of day they were having. My confrontation could be what sets them off. So I stopped that.” — Jennifer S.

“My son’s disabilities are not evident and I only use his placard when he’s having a bad day, such as high seizure activity or weakness. If he feels decent, we park in a standard spot because I know how important it is to be able to have the disabled parking spot. There have been times we parked in a regular spot and he ended up having a seizure in the store. I will get a wheelchair for him and have a store employee stay with him while I get my car. I have confronted people and I have been confronted… I think those that respond irrationally with anger or just ignore your question are the guilty ones. I’m sure those that confronted me regretted it because I took the opportunity to educate them on my son’s diagnosis.” — David R.

“I took a photo of a pizza delivery driver, asked her about it when she returned and when she blew me off with some not so nice words, I called her company…” — Jamie F.

“This kind of abuse happens on my university campus way, way too often. People use the spaces with their hazard lights on to pick up and drop off friends. I usually call the university police and give them the car’s make, model, and license plate information. I’ve seen a bit more police presence in that parking area since I started doing this.” — Masey A.

“I literally mind my own business because confrontation can become dangerous and I’m too sick to defend myself. I also have faith in Karma.” — TerryLynn B.

“If I am somewhere like a government building or hospital I sometimes mention it to the reception, as they can issue tickets for parking there illegally.” — Carol-Lynn N.

“If I happen to catch them before they go into the store I just politely tell them they forgot to put their pass up. (I’ve forgotten a couple times and felt awful when I got back and realized). They either put it up or are ashamed to be caught and move their vehicle. If not, I’ll sometimes leave a note.” — Meriena K.

“I take photos and share them with police. Sometimes it takes a bit to get an officer who understands and cares, but I’ve had people fined. If they don’t get fined, they will never learn.” — Lee F.

It is important to remember not all disabilities are visible, and there are still many myths about accessible parking, but if someone has a placard, they went through the process and had a medical professional back up the need for it.

So what should you do if you see someone park illegally?

Officer Zack Goins from Mississippi told The Mighty in a previous interview that promoting accessibility and making things easier for the disability community starts with being aware. He suggested if a citizen sees someone parking inappropriately, they can cautiously approach the offender, but for safety reasons, it can be best to call the police department who will send someone to investigate. “We will certainly take action,” he said. “Every scenario is different.”