When I Tried to Train My Own Service Dog

My dog failed service dog training. There, I said it.

This summer I put away my mini-goldendoodle’s “service dog in training” vest for the last time. It still stings to think about it. After over a year of training, my dog wasn’t progressing to the level of a mature service animal, or even a canine good citizen. It hurt. At the time, it felt like I was giving up on him entirely.

I’ve thought about partnering with a hearing dog since I was a little girl. I was born with progressive hearing and vision loss. When others hear about my condition, whether or not I would get a service dog is a common conversation topic. I can’t blame them for asking. There’s something very special about a dog that can alert someone to the sounds around them. I dreamed of a dog that would tell me when my name was called at a coffee shop, when a car was driving behind me and when the smoke detectors were going off at night. But it wasn’t until my 20s that I felt comfortable enough with outing myself as a person with a disability to get a service dog.

I never anticipated training my own service animal, but when my husband and I got our puppy Colfax last spring, it seemed like a good opportunity to try. I had a part-time job and years of experience working with my parent’s dogs as therapy animals. I had the time and patience to work with my dog on his new task oriented skills. Or so I thought.

His training started with a basic obedience course at Petsmart. The class had six other dogs, all between the ages of 10 months and 2 years. Colfax was the youngest. While he excelled at the basic commands, he was easily distractible. Colfax was the most playful dog in the class, often egging on the other dogs into disobedience when he grew tired of our training sessions. 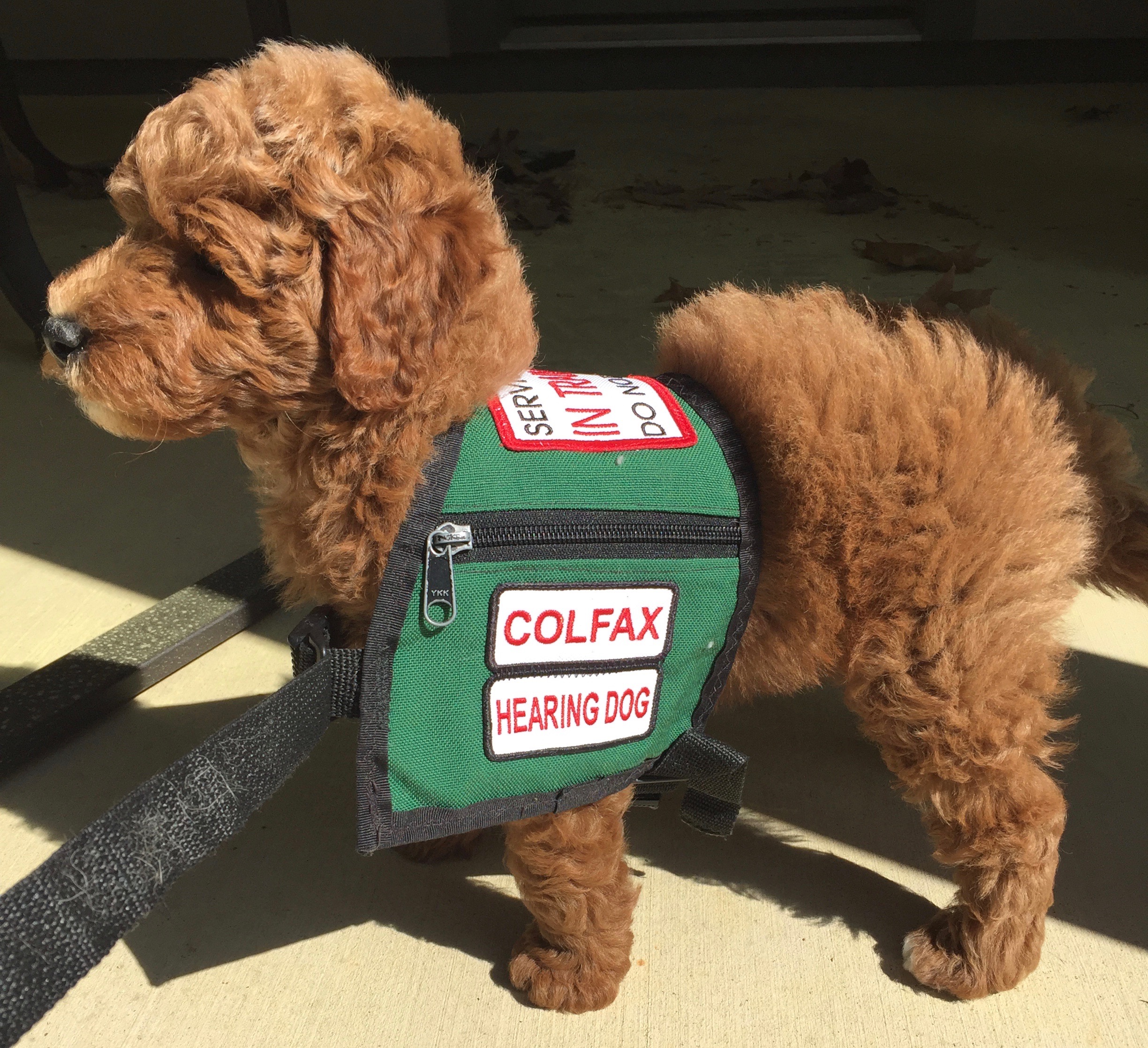 I attributed this behavior to age and continued to work with him well after the six weeks had passed in our class. When he had mastered sit, stay, drop it and some other basic commands I started working with him on hearing dog skills. The first of which was a natural skill, avoiding cars.

My neighborhood has no sidewalks or paths. I feel unsafe walking on my own because of my limited peripheral vision and hearing impairment. I often cannot see cars beside me or hear them behind me. I walk on the side of the road opposing oncoming traffic, but that does not help me avoid run-ins with people coming in and out of their driveways or passing me.

As soon as Colfax got the hang of walking on a leash, I had him walk on my right side. When cars approach, he retreats to a grassy area or gutter. I began to praise him every time he did this naturally before the car approached. “Good car!” He has a knack for shielding me from traffic, just by shielding himself.

By simply watching his behavior, I was also alerted to when people were around us and when the tornado sirens went off in our area. Walking with Colfax gave me confidence in navigation I had lost over years of being startled by cars, people and cyclists on the road.

But he still was easily distracted by other people and dogs. When another dog looked interested in play, Colfax would sometimes abandon his partnership with me and jump towards the next dog. This made it incredibly difficult to be consistent with training him as I did not always know if he was moving because there was an oncoming car or a nearby dog.

After months of working with him, my husband and I enlisted the help of a professional dog trainer to help us. After two weeks of working with him daily, she determined he did not have the focus needed to engage in service dog training. In fact, she found his high energy temperament difficult to engage with in regular training.

After that meeting, we decided to lift the burden of service dog off Colfax’s shoulders. We’re working with him to be the best dog he can be. I still train with him every day and take him to dog friendly places, but never with the service dog in training vest.

Even if you have a disability, it doesn’t automatically make your dog qualify as a service dog. I thought it was important to share my story to show that not all dogs are ready for this responsibility.

Do you have to certify your service animal? Under the ADA, people with disabilities have the right to train their own service animals and are not required to use a professional service dog training program. There is no legal service animal certification. There is no federal service dog registry, and yes, several companies are scamming people into thinking there are registries. If you’d like to read more about this, Service Dog Central has compiled a list of fraudulent companies.

Vests: Service animals are not required to wear any form of vest.

Hi, I'm Shannon. I've had hearing loss my whole life. But, it wasn't until 2015 that I found out I was going blind too -- hooray! I have Usher Syndrome type 2A. I am also a proud cochlear implant recipient. I write about issues associated with vision and hearing loss on my blog https://www.thisdeafblindlife.com

shannonreyenga
Want more of The Mighty?
You can find even more stories on our Home page. There, you’ll also find thoughts and questions by our community.
Take Me Home