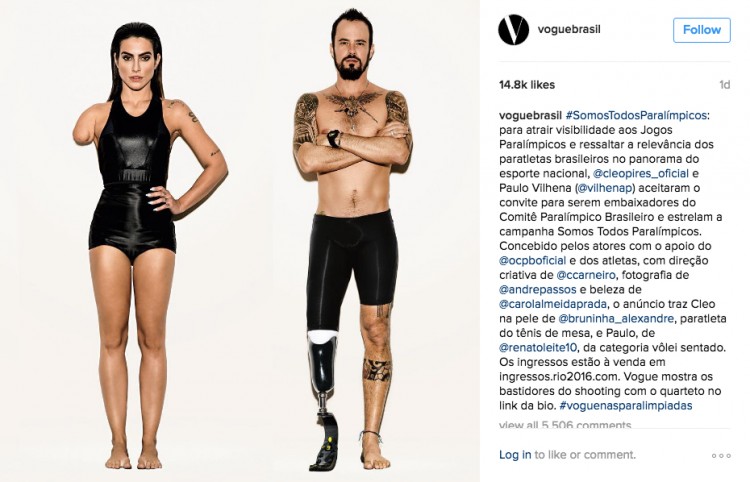 According to an Instagram caption posted by Vogue Brazil, Pires and Vilhena are ambassadors to Brazil’s Paralympic Committee. They are also the stars of Brazil’s “We Are All Special Olympics” campaign, designed by actors with the support of Brazil’s Paralympic committee and Paralympic athletes. The campaign is meant to bring visibility to the 2016 Summer Paralympics.

The photo posted on Vogue Brazil’s Instagram features a photoshopped photo of Pires without an arm and Vilhena with a prosthetic leg.

“[It’s] hard to understand why Vogue Brazil felt the need to use models who aren’t disabled in a Paralympic photoshoot,” Richard Lane, who works for U.K. nonprofit Scope, told the Huffington Post UK. “There are one billion disabled people in the world. Let’s see disabled people’s lives properly reflected, not imitated.”

People on Twitter aren’t happy either. “Even though there are models with those very disabilities @vogue could’ve featured, they’ve modeled together too,” one person wrote.

Even though there are models with those very disabilities @vogue could’ve featured, they’ve modeled together too. pic.twitter.com/q7jTCJysTZ

Another said: “Wow. That is some grade-A, vomit/rage inducing ableisim right there. NICE GOING VOGUE. ”

Both Leite and Alexandre were in the studios when the photos were shot, taking the time to pose with Pires and Vilhena. 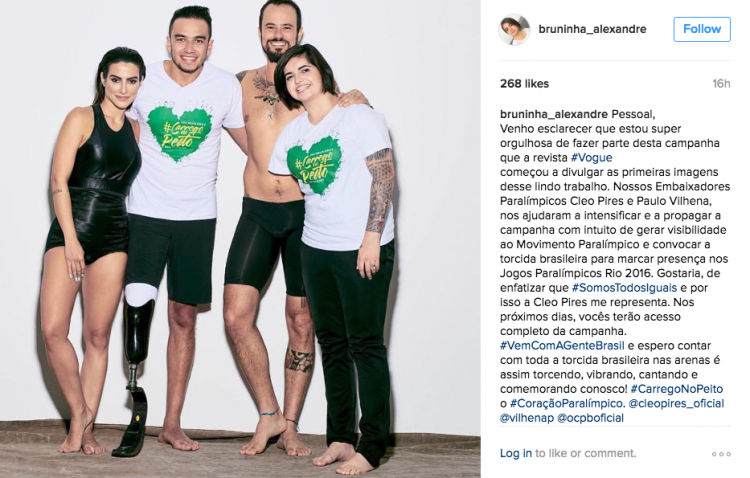 Despite the controversy, neither Leite nor Alexandre seem to be taking offense to the photos, with both posting the photoshopped image on their Instagrams. On her Instagram post, Alexandre wrote:

Personally, I have been clear that I am so proud to be part of this campaign that the magazine #Vogue began to publish the first pictures of this beautiful work. Our Ambassadors Paralympics Cleo Pires and Paulo Vilhena, helped to intensify and spread the campaign aiming to increase visibility to the Paralympic Movement and gathering the Brazilian fans to be present at the Paralympic Games Rio 2016.

We want to know what you think: Was it wrong for Vogue to photoshop their models? Let us know in the comments below.