My Best Friend's Response to My Daughter's Down Syndrome Diagnosis

My best friend and I have known each other for over 25 years; since we were 8 years old. Angela, as others call her, is Angel to me, her mom, and those of us who know her best and have known her the longest.

My friendship with Angel has always been of the utmost importance to me. We went from being silly little girls to raising our own silly children. She and I both have three kids; we were pregnant at the same time with two of our pregnancies. So needless to say, we’re more than just friends — we’re family. 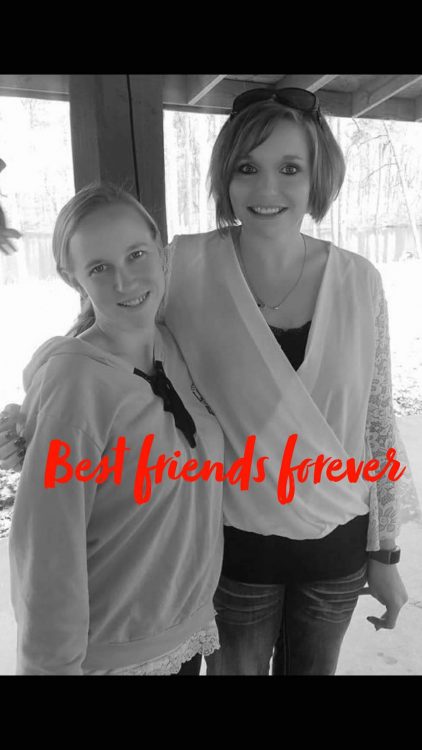 In October 2016 I was pregnant with my youngest daughter, Savannah. Angel’s youngest son, Jaxton, had just been born in July, so he was around 3 months old. She saw how difficult my pregnancy was, and how much time I spent hospitalized because of various complications. Then on October 13, 2016, Savannah made her arrival into this world. She was over 10 weeks early, she weighed just 2-pounds, 11-ounces and was 15 inches long. There are numerous complications that arise from premature birth, Savannah had quite a few. She had a choriod plexus cyst on her brain. She had a grade 4 intraventricular hemorrhage (brain bleed). She had three congenital heart defects at birth, ventricular septal defect (VSD) atrial septal defect (ASD) and patent foramen ovale (PFO). She developed bronchopulmonary dysplasia (BPD) because of the oxygen therapy she had to receive while in the NICU. She faced many challenges.

When Savannah was 5 days old, the doctors’ suspicions were proven to be true, as her complicated karyotype confirmed a diagnosis of Mosaic Translocation Down syndrome. I was devastated. Not only did my baby have to suffer through a traumatic birth, I thuoghts she would face a lifetime of potential health complications related to Down syndrome. I was uneducated about it, and believed a lot of the incorrect stereotypes about Down syndrome. Of course, Angel was one of the first people I talked to after Savannah’s diagnosis was confirmed. She patiently listened as I tried to explain what Mosaic Translocation even is. She listened to all my worries, my fears, my grief, without passing judgement. She told me everything would be fine, that it wouldn’t be easy, but that we all love Savannah and that’s what was important.

Angel shared she chose not to have the optional genetic testing when she was pregnant with her boys, because even if it was positive, it wouldn’t change a thing, they would still be her child regardless, and she would love them no matter what. She said so many things I really needed to hear at that time. She’s never tried to say she “knows how I feel,” but she has always been there for me.

As time passed, Savannah finally got to come home after 68 days in the NICU. I was so excited when Angel and Jaxton could finally come see us! Angel treated Savannah exactly the same as she had treated my other two children; she treated Savannah like the precious little baby she is. And she treated me the same as she always had. I wasn’t a “preemie mom” or “Down syndrome mom” to her, I was still just Heather. And I didn’t even know how much I needed that at that time.

As we all adjusted to our new “normal,” I couldn’t help but notice how so many people acted different around Savannah and our family. Not just strangers, either. Our own family members treat us and Savannah differently. She is 17 months old and there are people in our families who have never even held her. They flat out refuse when we’ve said, “Here, why don’t you hold her?” It comes across as if they thought Down syndrome is contagious. Sometimes other people’s ignorance hurts, but it’s shown us who truly loves and cares for us.

Over the past year, I have become very passionate about spreading awareness and being an advocate for my daughter. And that, too, makes some people uncomfortable. I will never “shut up” about Down syndrome or stop advocating for my daughter. But if my passion for the Down syndrome and the disability community has ever made Angel feel uncomfortable, she does a top notch job of hiding it! She has encouraged and supported everything I’ve done to advocate and raise awareness. And at the same time she has always treated me and my children the same — she treats us like I’m her best friend and my kids are her children’s best friends. Because that’s what we are.

Angel and I are still “Heather and Angel,” with all the ridiculous stories of the things we did when we were teenagers, along with adding some pretty amazing new memories. My best friend’s response to my daughter’s diagnosis of Down syndrome is another one of the millions of reasons why I love her so much. It isn’t anything special in her opinion, and honestly I wouldn’t have expected anything less from her than all the love, support and compassion she showed me in those early days, because that’s just who she is.

I pray that every new mom who just found out her child has Down syndrome would have a best friend like Angel in their life. Her response to everything was exactly what I needed at that time, and her continued support absolutely means the world to me. I hope that other people in that situation, where their friend has learned their child may have a disability, could learn from Angel’s response, and be to them what my best friend was to me.

I am a mother of 4 and outspoken advocate in the Down syndrome and special needs communities. My youngest daughter, Savannah, has Mosaic Translocation Down Syndrome.

heatherhanenburg3
Want more of The Mighty?
You can find even more stories on our Home page. There, you’ll also find thoughts and questions by our community.
Take Me Home