The following is a review of “Born This Way” season 4, episode 5 and contains spoilers.

At the beginning of the episode, we see the friends walk into a yoga class and find out they will be doing goat yoga. Basically, they do yoga with goats. The friends and their families also attend a “leaps and bounds” fundraiser celebrating inclusion. Elena participates in the show and plays the drums.

Peter’s thoughts: It was the first time I ever saw goat yoga! I was laughing because there were real live goats there. The whole cast was laughing, and the goats were standing on them and they were all laughing. It looked like fun.

Rachel is learning what it means to live independently. She acknowledges it is difficult at first, but she believes it will get easier. Laurie, Rachel’s mom, says she will probably be at the house every day to check on Rachel until she feels assured everything will be OK. As a mom of a child with Down syndrome, I can see myself doing the same thing. Rachel invites her dad over for dinner and makes salad and grilled cheese sandwiches and we get to see what a great relationship they have.

I am someone who jokes about my daughter with Down syndrome living with us forever. I enjoy her, and I have no desire for her to move out. Realistically, she will want to be independent, and this episode really tackles what the challenges of that independent living can be like for the adults with Down syndrome and their parents.

Peter’s thoughts: Rachel is good at some of her living skills. She wants to do everything on her own. But she did do one thing wrong. She opened the door when her parents came over. She never checked outside to see who it is at the door before she opened it. That is not right to do. She needed to say, “Who is it?” and that would be safer. Her parents came over and gave her more tips on her living skills. I want to know why they need to check on her. Then later, Rachel had her dad over for the first time in her new house. She actually cooked for him by herself. She made grilled cheese and her dad was happy and they had a fun time together.

Megan and her mom, Kris, have an argument surrounding Megan’s use of social media. When Kris is unable to reach Megan, she calls one of the producers so she can talk to her daughter. Megan is not happy with the way her mom talks to her. Later, when Kris stops by, they talk about what happened. “I don’t think Megan needs me as much as I thought she did,” Kris says.

Peter’s thoughts: Megan and her mom had a little drama. Megan accidentally posted something and her mom got upset. Her mom did not like it and tried to call her so many times but Megan’s phone was on vibrate and she was distracted by doing fun things on her own. Then she talked to her mom in person and they had some more drama. Megan said, “I am not a little kid. I am not a teenager. I am a grown woman.” Her mom accepted that, and they were happy.

The new roommates throw a party for their friends. The theme? A “no drama” party.

Peter’s thoughts: Megan decided to have a “No Drama” party at the new house. Rachel really wanted to have a girl’s party. But Megan wanted everyone to come over. She told Rachel that the guys did not see the new house yet. So they decided to invite everyone in the cast of “Born This Way” to the party. Rachel changed her mind. They made a “No Drama” sign. They had balloons and decorations. Everyone came and the cast came over. They all had a great time with dancing and lots of food.

Sean goes to his mom house to talk about his business Seanese. Sandra, his mom, wants them to talk about inventory and which designs they should keep and which ones should go. She shows Sean how many of each shirt they have sold so Sean can see which are his most popular designs and which ones are not selling. The business is critical for Sean, as this is his source of income. Sean needs to work on his social media presence, and he asks his girlfriend, Caley, to help him as he confesses to her his business is not doing so well.

Sean sets up a pop-up store and does well. His most popular shirt is one his mom thought should go, reminding Sandra her son knows what he is doing.

Peter’s thoughts: Sean has a business that is all about T-shirts.  The people who help him out are his parents and his new girlfriend. He and his mom were talking about the business and how to make it grow. They were talking about what to do and who is the boss and Sean said something funny. He said, “We should have two businesses: Momese and Seanese.”  I like Sean’s T-shirts and he was right about the T-shirt that was about beer, burritos and babes. It was the best seller. Also, Sean went on a date with his girlfriend. They were very happy and Sean told Caley that he loved her the best.

In this episode, we see a lot more of 4-year-old Rocco. Laurie, Rachel’s mom, reminds Rocco’s mom to dream big, as the opportunities they have now are so different from what Rachel had when she was born.

Rocco has a fear of the school bus steps. I know some people with Down syndrome who have a hard time with steps too. His parents help him out on the steps, but he was still scared. But he will get it if he just keeps practicing. Rocco goes to speech therapy with a special teacher. He is working on a lot of words. Speech is really important. He needs to speak clearly when he is older. I had a lot of speech therapy in my life. I started with sign language when I was a baby and that helped me to learn how to say words.  Now I am an actor on TV and I can speak clearly. 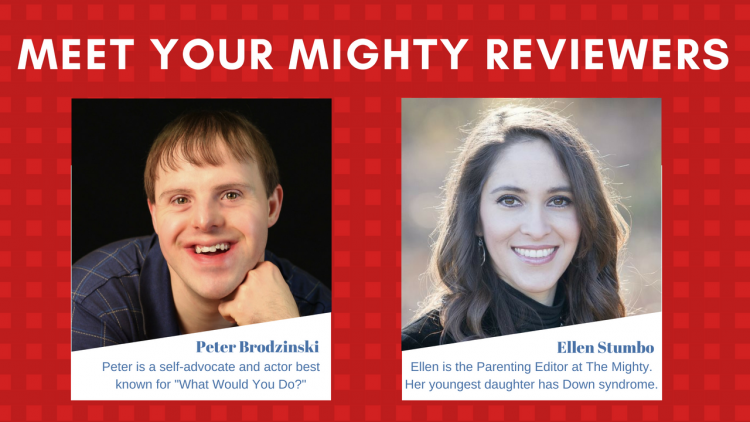