Before my child with Down syndrome was born, I never thought about what it meant to have a child who was Special because all of my kids were special. Each one is unique with his or her own talents, abilities and struggles. They’re all special. But Stella is Special with a capital S. It’s a little something extra.

Let me explain with a story: One evening, when Stella was about 2, our family visited a church that wasn’t our own. As speakers made presentations, Stella got a bit antsy, so I left the pew and stood in the back of the church to bounce her in my arms. Maybe she would fall asleep so I could hear the presentations and learn something. I had a few stressors at the time and needed a bit of a spiritual boost. I was looking forward to this.

But Stella had another idea. She wiggled and wriggled, trying energetically to get away from me. In her deep, low voice, she said, “Dowww!” She emphatically wanted down, and she wasn’t about to be shushed. I set her down on the floor, and she began ambling straight toward a man against the back wall. I followed, trying to quietly corral her back into a corner where we could have a little personal space and wouldn’t disturb anyone. No way. Stella persisted and beelined as fast as she could right up to the man.

He was stern-looking, bearded and wearing old jeans. Stella walked right up to him and hugged his leg.

For the next five or 10 minutes, we repeated this scene.

Stella would yell at me to let her down, and right away, she’d run to the man and hug his leg.

“Really?” He looked surprised. Then he leaned down and held out his arms. My little Stella embraced him, tightly wrapping her arms around his neck.

I stood right next to him, watching.

Stella buried her face in his bearded neck, gently touching the back of his head with her small fingers. She petted him and rested. A group of people watched Stella, no longer paying any attention to the speaker. Everyone in the back of the crowded church was watching the toddler, hugging the grizzled man.

She rested for about 10 minutes like that, nestled in his arms and loving him.

When the speaker finished, the man gently handed my daughter back to me.

“Thank you,” he said. Then he walked away into the starry night. A tear glistened on his cheek.

After he left, a man and woman approached me. “Do you know that man?” they asked.

“I am astonished that your daughter went up to him like that.”

“He’s the crankiest, grumpiest man! He doesn’t talk to anyone. He always just stands in the back, scowling and waiting.”

Before I knew Stella, I would’ve been surprised. Perhaps even embarrassed. But not now. Now I know Stella. That little extra chromosome has given her a superpower: an ability to love others, unfiltered. She’s unchained by manners, propriety or personal space issues. With something as simple and uncomplicated as a hug, I believe she helps people feel God’s love.

And I’m not surprised at all.

Because now I know. 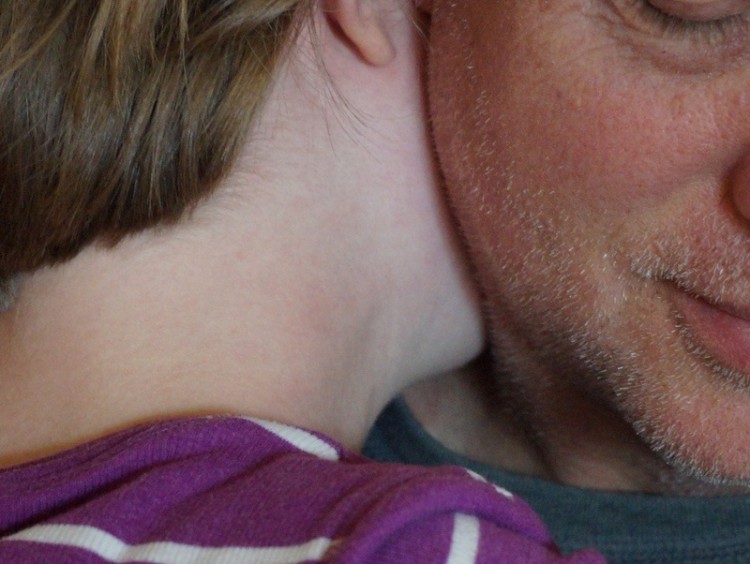 A version of this post originally appeared on MichelleMahnke.com.

Michelle Mahnke is an artist and writer who believes that love, joy and peace can be found in small things, every day. Michelle writes and cartoons about family life, which includes her comic book drawing husband, seven kids of different abilities, an old dog and a rabbit with an attitude. She blogs at michellemahnke.com and downsideups.com &nbsp;

michelle-mahnke
Want more of The Mighty?
You can find even more stories on our Home page. There, you’ll also find thoughts and questions by our community.
Take Me Home