Nearly Every Adult With Down Syndrome Will Develop Alzheimer’s Disease

The Washington Post reported: “Of the 210,000 people with Down syndrome, about a third have Alzheimer’s, or are at high risk because of their age, with the average age of diagnosis about 54. The illness worsens relatively quickly, with individuals dying within four years.”

Take a moment to consider those numbers. I am John’s father, and our family has already seen what Alzheimer’s can do to another family member, how devastating to the person and for the family. It can be overwhelming to sit here and think that John has within him this awful disease waiting to wreck him from the inside out. When we talk about Alzheimer’s disease, it is deeply personal. John and others with Down syndrome are not statistics, they are our sons and daughters, brothers and sisters, friends, relatives, and co-workers.

John has a lot to live for. He leads his own business (John’s Crazy Socks), he’s active in the Special Olympics and he leads a full and active life. We and John cannot sit idly by. We have to take action to change the path that leads to Alzheimer’s. 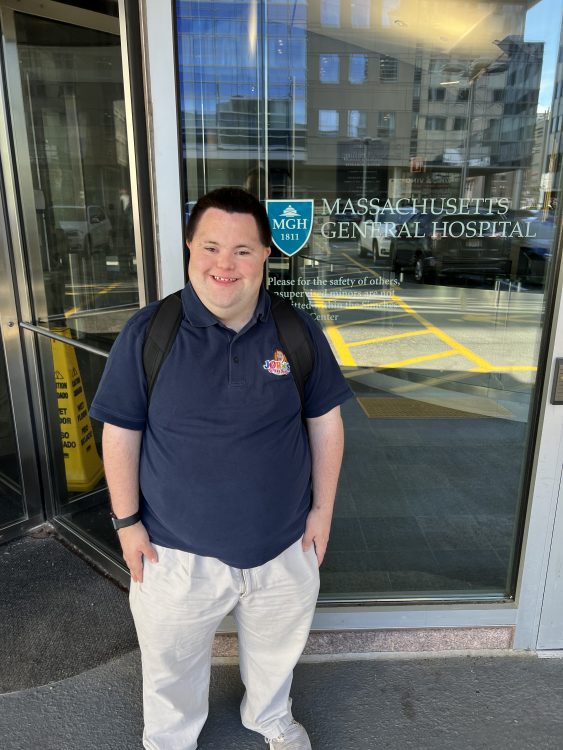 John enrolled in the Longitudinal Investigation for the Enhancement of Down Syndrome Research (LIFE-DSR), a multi-year, coordinated research study by medical and academic professionals to track and analyze the medical and physical data of 270 adults with Down syndrome. We were introduced to the study by our friends and charity partner, LuMind-IDSC Down Syndrome Foundation. LuMind IDSC is committed to accelerating research to increase the availability of therapeutic, diagnostic, and medical care options for people with Down syndrome and they empower families through education, connections, and support.

To put the facts about Down syndrome and Alzheimer’s in context, we start with some good news. Medical treatment and the health status of people with Down syndrome have continually improved and life expectancy has climbed.

What’s going on? People with Down syndrome often face significant medical challenges and many of those challenges present at birth. In the past, the infant mortality rate for people with Down syndrome was very high, but medical advances have led to different outcomes. Take John as an example. On his third day of life, he needed a bowel resection as his intestine was blocked and not fully formed. Nearly 50 percent of people with Down syndrome are born with a heart defect and that was true for John. Before he was three months old, John needed open heart surgery. He had two holes in his heart which led to congestive heart failure. A few years earlier, those life-saving procedures did not exist.

Medical experts estimate that a person with Down syndrome has a life expectancy of 60 years. I do not think they really know because medical treatment and supports continue to improve so people are living longer and longer.

The good news is that people with Down syndrome are living longer than ever. Now the bad news: that means they will live long enough to develop Alzheimer’s disease. I will not go into the details of the medical science. (If interested, here is a link to get you started.) Suffice it to say that Down syndrome results from having an extra 21st chromosome (remember, we all have 23 pairs of chromosomes). Thus, people with Down syndrome have a little bit extra. However, the 21st chromosome is also associated with Alzheimer’s disease.

Scientists are already working on drugs that can slow or prevent some symptoms of Alzheimer’s from forming. They expect to begin to conduct clinical trials with these drugs soon.

Let’s put this in a human context. It gives John and people with Down syndrome a reprieve; medical research is offering hope that their fate can change.

Medical research studies matter because they provide the data that scientists need to identify the causes of Alzheimer’s and ways to prevent the disease. And as drugs designed to prevent Alzheimer’s move into clinical trial stages, researchers will need test panels to study the efficacy of the drugs.

If you know John, you know that he derives happiness from doing for others. John wanted to join this study because he knows other people are dependent on this medical research. And it was easy. We spent a morning at Mass General. The doctors and staff were organized and supportive. John underwent a simple medical exam that was no different than an exam he would undergo with his primary care doctor. He then sat for an interview that assessed his abilities. At the same time, researchers interviewed my wife and me to learn about John’s medical history and to ask questions to help assess his abilities.

“It was easy,” said John. “I am so glad I joined this study.” He is so proud of himself for helping researchers who are helping people with Down syndrome.

You Can Make a Difference

If you are a person with Down syndrome or have a family member with Down syndrome, please consider joining the LIFE-DSR study. The study is currently taking place at 14 sites in 10 states and welcomes participants from all across the country. If you need help with travel, they can help you.

As the parent of a child with Down syndrome, I have learned to appreciate the importance of understanding all he can do instead of focusing on his limitations. Every day, I learn from him.