Why 'Spread the Word to End the Word' Is So Important

The r-word first originated as a medical phrase, “mental retardation,” from the mid-1890s which was synonymous for slow or delayed. This term was a replacement for other derogatory words used at the time like “moron” or “idiot.” It wasn’t until the 1960s that this term took on an entirely different meaning used to insult people.

So why can’t we say the r-word and what makes it a poor choice? It’s the way the word has evolved and adapted into a negative way to make fun of those with disabilities. Instead of saying, “That’s so ridiculous,” people are now saying, “That’s so r*******” and comparing it to those who have some form of disability or “delay.”

Individuals with disabilities are already facing discrimination and adversity within their communities. They are often victims of sexual assaults, bullying, workplace discrimination, and sometimes even murdered for being who they are. Adding insulting and derogatory terms is just unnecessary — and it’s extremely simple to erase the r-word from everyday use and replace it with another, more appropriate term. 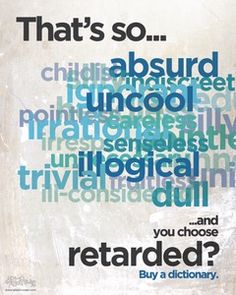 Help us eradicate the r-word by spreading awareness and advocating for those with disabilities. You can take the pledge to stop saying the word at Spread the Word. Below are resources you can use and share via social media, email, your workplace and schools to help spread the message.

Has your child been bullied at school?

I'm the proud mother of a daughter, Charlie, who's 6 and has Down syndrome and 3 year old, Harper. I am a disability advocate working on getting an organ transplant anti-discrimination law passed in every state as well as federally and I'm an author. I've written six books, four of which include children who have Down syndrome. I'm a blogger, the former social media and blog director for Save Down Syndrome and freelance writer. In my spare time, I hang out with my kids, eat cheesecake, hike, and collect odd things like sharks teeth and old copies of Wuthering Heights. I'm also an avid believer that laughter is the best medicine and sarcasm is my love language.

lindsay-robertson
Want more of The Mighty?
You can find even more stories on our Home page. There, you’ll also find thoughts and questions by our community.
Take Me Home