A reality TV star is being sued after sharing an offensive meme featuring a girl with Down syndrome.

Valentin Chmerkovskiy, a dancer on the reality show “Dancing With the Stars,” came under fire earlier this month after posting a meme, which has since been removed, on his public Facebook page. The meme read, “Letting your kid become obese should be considered child abuse,” and it showed a picture of a child who turns out to have Down syndrome. 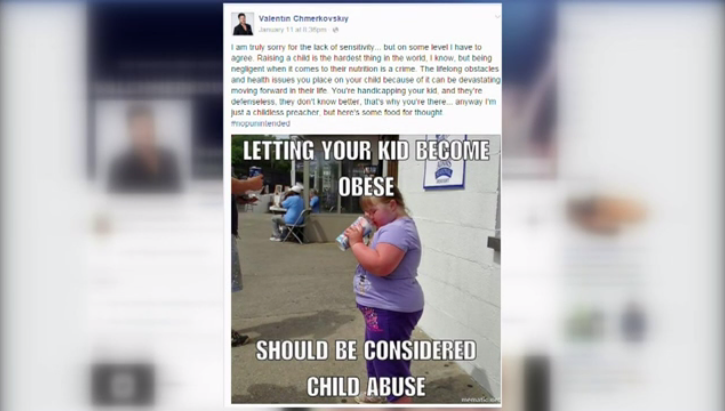 Her name is Skylar and she’s from Robertson County, Tennessee, WKRN reported. She is now 16 but was much younger at the time the photo was taken, maybe nine or 10 years old.

She and her family are suing for defamation, emotional distress and invasion of privacy, seeking $6 million from Chmerkovskiy, $600k from the person who took the photo and $6 million from CBS, who also shared the photo, according to TMZ. They say that the photo, which was made into a meme with the caption “Everything wrong with America” in 2014, resurfaced and went viral when Chmerkovskiy shared it, which was devastating to the family.

The family's ordeal began after her Skylar's sister, Harley Eden, saw it online earlier this month and realized it was Skyler, WKRN News reported. “I couldn't believe it when I saw it,” Harley Eden, Skyler's sister, told the outlet. “[It]makes me wonder what kind of people are out there. It makes me sick.” Chmerkovskiy's didn't mention Down syndrome at all in his post. His caption read:

I am truly sorry for the lack of sensitivity… but on some level I have to agree. Raising a child is the hardest thing in the world, I know, but being negligent when it comes to their nutrition is a crime. The lifelong obstacles and health issues you place on your child because of it can be devastating moving forward in their life. You're handicapping your kid, and they're defenseless, they don't know better, that's why you're there… anyway I'm just a childless preacher, but here's some food for thought. ‪#‎nopunintended

The Facebook post garnered hundreds of likes and shares but has later removed. Chmerkovskiy later apologized for the offense on Facebook, but then continued to defend his position and speak about childhood obesity on his social media. “I am truly sorry for the lack of sensitivity … but on some level I have to agree,” Chmerkovskiy wrote, going on to explain how he thought some parents were “handicapping” their kids by allowing them to become obese, the New York Daily News reported. Skylar's mother told WKRN News her daughter has battled with her weight since the age of four and now attends a weight management clinic at Vanderbilt University Medical Center. Adults with Down syndrome are more likely to be obese than those without the condition, according to the National Down Syndrome Society. It's often the result of untreated hypothyroidism, a condition in which the thyroid gland doesn't produce enough thyroid hormone. Get more on the story from the video below:

The Mighty reached out to Chmerkovskiy for comment but are yet to hear back.

Save
Conversations 45
We use cookies and related technologies to help identify you and your devices, enhance your experience and conduct advertising and analysis. By choosing "Accept", or by using this site, you are agreeing to our use of cookies. You can read more about how The Mighty uses cookies in our Cookie Notice.
Manage Choices
Accept