It was a long and tense IEP meeting to cap off a long and disastrous school year.

My son, Bobby, was finishing up kindergarten at the all special needs school he had attended since he turned 3. In the beginning, the school was a great choice. He had his third and final open heart surgery just as he became eligible for Pre-K, and we liked that the school had a full nursing staff to monitor him and administer his g-tube feeds. We also liked that the school had full-time onsite therapists to encourage his development that had been slowed by both his medical challenges and Down syndrome diagnosis. He had thrived there until a stunning regression in his kindergarten year.

I wasn’t naïve enough to think that the education system was without major flaws, but I still believed that this particular school was dedicated to providing the best possible education to every student. But the truth was, teachers had been sheltering us from some harsh realities. His current teacher showed no concern or curiosity when Bobby effectively withdrew from the class and his classmates. Instead of helping him, she told us Bobby was having an outstanding year. She had held us at bay until the IEP, when the truth of his struggles finally came out.

Bobby had gone from being a friendly boy who participated in class to a boy who sat on his hands and ducked his eyes whenever he was asked a question. An aide who had worked with him over a two-year period pulled me aside to tell me that he would not even answer questions about his ABCs, a skill he had mastered the year before. As far as social interaction went, Bobby isolated himself from the class during recess, screaming if another child got within six feet of him.

We soon enough identified the cause. Bobby’s classmates were a group of rambunctious boys, many of whom had never been in a structured environment before.  They weren’t mean-spirited, but they were out of control and much bigger and stronger than my son. In those days, Bobby never really felt steady on his feet — his core strength was compromised by hypotonia and the three-time breaking of his sternum for heart surgery. Being close to unpredictable boys who didn’t respect personal space must have been horrible. So he withdrew. And being nonverbal, he could tell us none of this. We saw glimpses of the wild classroom behavior, but did not understand the impact on Bobby until the year was almost over.

It was clearly time for a new school. I didn’t want Bobby to advance a grade in that same chaotic environment. The school administrators had been content to manage around our concerns rather than address them directly, so I had no faith that even a different teacher could improve things.

So there we sat in the IEP meeting. I appealed to a higher level administrator within the district who could override the school. Prior to the meeting she had spent 15 minutes observing Bobby and was now telling my partner and me what she had seen.

“The teacher asked him a question and he just sat on his hands,” she said.

I nodded, confident that was exactly what happened.

“A friend bumped his elbow and he whined about it.”

I nodded again, resisting the urge to suggest that Bobby might not see his classmates as friends. My partner and I listened patiently. Her evaluation didn’t matter to us. We knew the child she saw in the classroom wasn’t the real him.

Then we made our request – that Bobby be placed in his neighborhood school the following year. 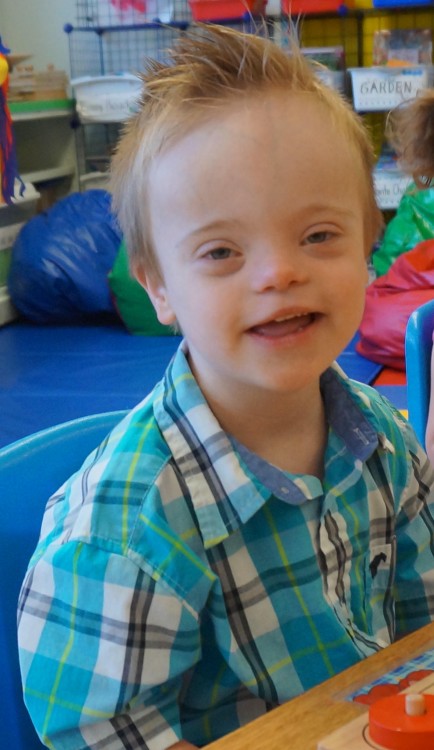 “Yes, I also want to talk about that,” the administrator said. “The self-contained classrooms at the neighborhood school are much more advanced than Bobby is used to. I think it will be difficult for him.”

“Well, Bobby tends to rise to the occasion. Put him in a classroom like that and he’ll follow the lead of other children,” I responded.

“There were other children answering questions today, but Bobby didn’t take their example. He couldn’t identify any letters.” The administrator smiled sympathetically across the table.

“He knows his letters,” I answered defensively. “He knew them last year.”

She smiled again, still gratingly sympathetic, as if she believed we needed to be drawn out of denial. “He has communication barriers that will make it hard for him to adapt to the new school,” she offered.

“We have been trying to get the school here to work with him on a communication device, but they didn’t do it,” my partner countered. The edge to her voice told me I wasn’t the only angry mama in the room.

Then, in what seemed to be an almost surreal moment, the administrator answered back. “Maybe he wasn’t ready for a communication device. Maybe he doesn’t understand object permanence.”

That stopped me. This woman had seen my son for 15 minutes in a situation that we had clearly stated didn’t reflect his potential, and she was asking me to consider that his development level was infantile?

I believed she was gas-lighting me. It seemed her intent was to keep throwing out negative assessments of Bobby so that I would doubt my own belief in his ability. Once I succumbed, the district could place him in a location that was convenient for them, not effective for him. I realized then that while we all need someone to believe in us, in Bobby’s case it is absolutely mandatory that I hold tight to the truth of who he is, to prevent some bureaucrat from destroying his essence out of simple convenience.

So, I began the conversation again, asking pointedly, “So we’re all on the same page, legally we can’t be prevented from sending him to the neighborhood school, correct?”

It was the one card I had to play. Fortunately, it was a trump card. And so we took it from there.

Bobby didn’t attend the neighborhood school after all, but did end up in a terrific new classroom with a teacher who emphasized structure, social skills, and self-esteem. Now, his comments on his final report card are much more positive.

Being surrounded by people who believe in you can make all the difference.

I live in San Diego with my wife and son, Find more of my writing at annepennistongrunsted.wordpress.com

agrunsted
Want more of The Mighty?
You can find even more stories on our Home page. There, you’ll also find thoughts and questions by our community.
Take Me Home