The Day We Received My Son's Dyskeratosis Congenita Diagnosis

Our story of parenting a medically rare child starts with the premature birth of our son, Dax Michael in 2012. After being home from the NICU for a few months, we started to notice that Dax wasn’t meeting milestones and hoped that prematurity was the cause. He was enrolled in physical therapy right away and underwent several big, scary tests. You know the kind.

On Christmas Eve 2012, an MRI brain scan revealed that Dax’s cerebellum was small and we were given a diagnosis of Dandy Walker syndrome. This would affect his gross motor and speech skills, so we provided him as much private therapy sessions as possible over the years to help him strengthen his abilities.

In 2014, we noticed bruising on Dax’s back, and a blood test showed that his platelets were low (platelets provide the blood the ability to clot). After monitoring his blood for a few weeks, we connected with a pediatric hematologist/oncologist to undergo testing for leukemia. Those tests came back negative and we settled in on an idea that Dax simply had low platelet numbers.

We would continue to monitor his levels every month and were instructed that should we see any bleeding that wouldn’t stop, an immediate trip to the ER was in order.

In August 2016, I woke up holding Dax, who had a nose bleed. We calmly went to the bath to clean things up but the slow, dripping bleed persisted. The scenario triggered what we had been warned to watch out for, so we drove to the ER. The focus was on controlling the bleeding, which did occur after a night in the hospital.

We then packed up for a trip to a town six hours away to meet with our doctor and her team. We again performed a bone marrow biopsy looking for cancer, which again showed a negative result. We knew that he was having “bone marrow failure,” but we didn’t know why. After one week of in-patient care and dozens of tests in process, we were sent home to wait and wonder.

By this time, we had become accustomed to waiting and wondering. When your kid is sick, that time is dreadfully painful as many know. However, his sweet face and sunny disposition makes makes it all better.

From the beginning of August to the end of November, we waited patiently to hear what exactly was causing Dax’s bone marrow failure. During this time, we learned that a bone marrow transplant (BMT) would likely be needed to cure the instability in his blood and we began the search for a donor through Be The Match.

Finally, a genetic mutation was discovered that not only explained the bone marrow failure, but also explained the cerebellar hypoplasia that was previously attributed to Dandy Walker, and his challenges in speech and motor skills. Even his whispy hair and ridged fingernails pointed to this disorder known as dyskeratosis congenita (DKC).

Enter Dr. Google, and weeks of trying to understand what this diagnosis meant for our family. We learned that DKC is a very rare condition which centers around short telomeres. Suddenly, we’re learning about genetics and what the heck a telomere is. Apparently, that little piece of DNA is quite critical to a long, healthy life.

From the Seattle Children’s Hospital website: Dyskeratosis congenita (DKC) is an inherited disorder. Symptoms include abnormal skin pigmentation, abnormal nail growth, and leukoplakia (white patches inside the mouth). Patients with DKC are predisposed to bone marrow failure, some cancers, and pulmonary problems.

Note: I don’t suggest Googling your kid’s diagnosis. I only read trusted medical sources, like the Seattle Children’s Hospital’s site, which is where our summary of DKC comes from. 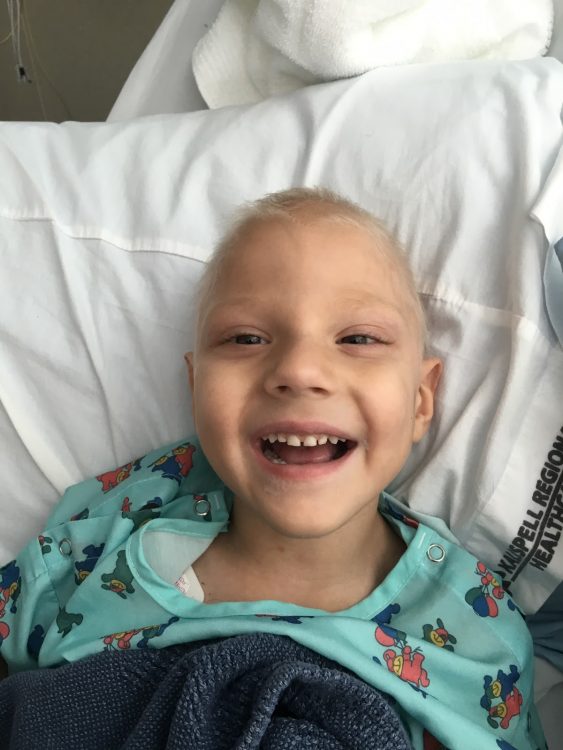 Chantel Schieffer is the proud mother to Dax Michael Schieffer, a remarkable young boy diagnosed with dyskeratosis congenita, a rare and serious illness affecting his brain and blood, but not his spirit.