We always take the photos and videos of the good times, the exciting moments to share. But what about the times of pain and suffering? Shouldn’t these be moments that should be shared? Shared to show the pain and the struggles we endure?

I get it – most people would say, “Why would I want to see that?” Also, taking a video or a photo of yourself or of the one you love while in severe pain is the last thing you think about doing. But these moments spread awareness, they show the difficulties we have with everyday life.

For instance, I’ll share with you the pain I experienced at the #EndoMarch. The night before the march I had a little flare-up. This was out of the blue and unexpected, I hadn’t had a flare-up in months due to being on leuprorelin acetate and having excision surgery while on it. I’ve been off it for four months; don’t get me wrong, I’ve had pains and twinges since coming off it, but what I then experienced on Saturday during the march broke my heart. It meant what the surgeon had said was real. “We can keep cutting it away but it will keep growing back.” Four months after finishing my second round of medication, nine months since my second surgery, and the pain that takes my breath away has come back. 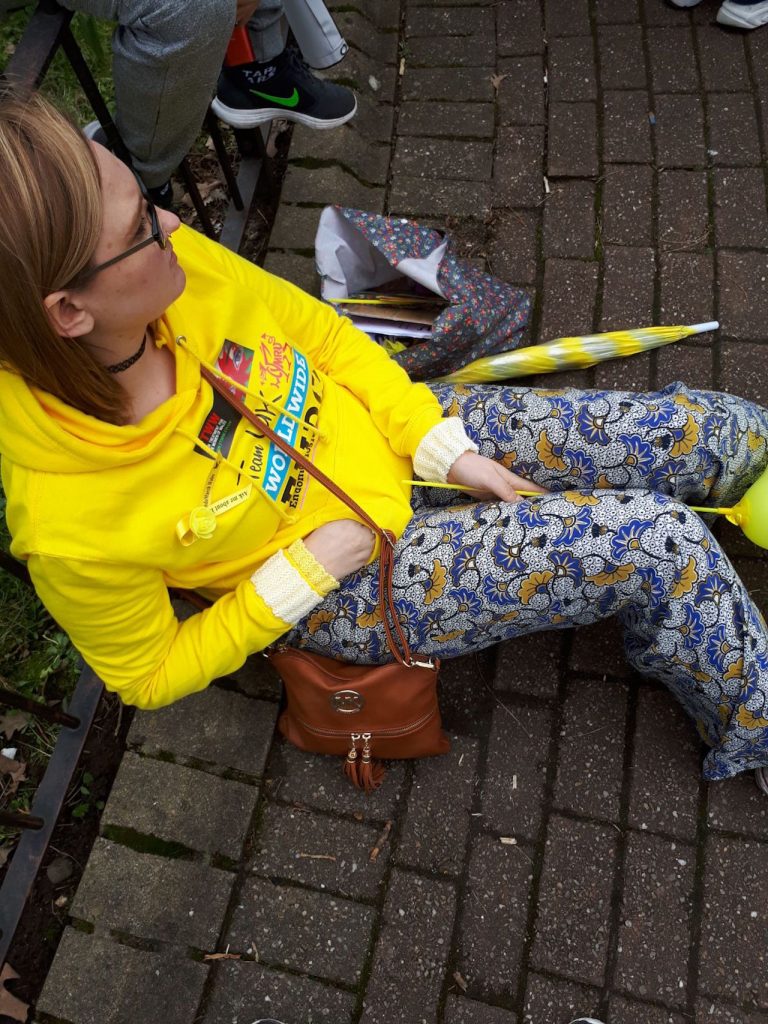 My husband took this photo of me while we were waiting to start the march. I was in pain and quite uncomfortable. This is the only in-pain photo I have but if I hadn’t told you I was in pain in that picture you wouldn’t have known. I’d had horrible pains before heading down there and had to take acetaminophen and tramadol and smother myself in heat lotion. I struggled to walk just 15 minutes to the event having to keep stopping due to stabbing and shooting pains in my ovaries that took my breath and made me stand to a halt. You didn’t know this as there are no photos. I didn’t want to not do a walk I’d traveled nearly four hours to get to, so off I went near the front on the march.

Halfway through the pain starting getting so bad I was slowing right down. It got to a point I was right at the back with another incredible lady. My legs were giving up and the pain to move them as well as the pain in my joints, back, groin and abdomen was immense. An amazing lady, Laura, linked my arm and held me up, supporting me so I could walk. My husband on occasions had to support me on the other side when I became too unsteady. Another kind lady, can you believe, offered me her own walking stick that she was using to help me (I gratefully declined). By this point the crowd was disappearing out of view.

Stopping for more strong painkillers, determined to carry on, holding back the tears but making the strangest of grunts and moans (you know the ones) to manage the pain as I kept taking another step forward. Thanking the police support who were holding up the traffic and telling me not to rush and that I was doing great was an emotional moment. My lad holding a megaphone staying by our new friends that were hanging back to walk with us, chanting and cheering us on was a proud moment. Then there was the moment we saw the finishing point, saw all those who took part already there and ready to go inside, seeing those who were waiting inside for us to congratulate us, knowing that I did it, through the pain, with the support of amazing kind people, I really did it… that was a sense of achievement.

The photos taken show the smiles and the cheers. What they don’t show are the tears and pain. The struggle to walk, the difficulty trying to climb the stairs that you have to spread your legs out and push your weight with your arms to open scissor walk up some steps. It doesn’t show the moment you collapse in the toilet and let out the tears. These moments need sharing because people need to see this pain is real. That it does come back after numerous operations and numerous times being put through menopause. That this is not normal and we should not have to live like this with no cure and treatments that barely last a few months.

Hey guys I'm Samantha I was diagnosed with Endometriosis in 2014 which took 11 years to diagnose. I have had surgery twice and due another one next year, I've also been through temporary menopause twice. I've got secondary infertility a ton of pain and a voice which want to use to spread awareness and fight towards getting us a cure!!