“Quit being so needy!” “Why are you so whiney?!” “Are you really that lazy?” Being labeled by caregivers and loved ones because of endometriosis is one of the worst mistreatments a patient can receive. An endometriosis patient takes more than she gives. That’s simply the nature of the disease – it takes. With that, people close to an endometriosis patient can quickly become frustrated because we never seem to get better, or when we do, it’s often fleeting. Because of this, women are often labeled as “needy,” “whiney” or “lazy.” The latter being the one almost everyone in my life, when playing pin-the-label-on-the-sick-person, chose to ascribe to me. I wasn’t lazy; I was sick.

Endometriosis can cause extreme fatigue, and we patients become dependent on those around us to help with even the simplest of tasks. Yes, even that time I asked for help popping the tab on a can of Diet Dr. Pepper because I had already exhausted all of my energy to walk to the kitchen, open the fridge, bend over, and pick it up. When one asks for help (because we’re told “Anything you need, I’m here for you”) and the request is met with “Are you really that lazy?!” it’s then most damaging because in our vulnerability, when we finally decide to reach out, we are mocked and labeled.

Before my diagnosis, my symptoms created turmoil between me and my parents. Many times my father would say to me, “You’re too young to be this tired. When I was your age I worked four jobs and got four hours of sleep a night. I managed just fine.” Other times, my mother would become frustrated with my frequent napping and mock me in a high-pitched exaggeration of my own voice: “But I’m tiiiirrrreeeedddd…” I heard the labels “worthless,” “trifling” and “waste” tossed in my direction. This was meant to be tough love for me to “wake up and get it together.” But all it did was hurt my self-esteem and cause me to be even more unmotivated. I did not like disappointing my parents.

I was in graduate school and I taught English at a local community college. This was a lot of responsibility for a 24-year-old, and by the end of my work day, I was spent. I would come home and sleep for five to six hours. Some days, I couldn’t get out of bed and I’d cancel classes or miss my own classes which frustrated my students and caused my grades to plummet. In my parents’ defense, superficially, I probably just looked lazy. What they didn’t know was, day after day, endometriosis eroded my reproductive organs, attacked my bowels and inflamed my bladder – parasitically sucking my energy, drive, ambition and will to succeed right out of me. After lectures from my parents, I would lie in my bed with the heating pad between my legs and question myself. My parents loved me and only wanted the best for me.

What if the pain I felt wasn’t actually that bad and other women managed it better?

What if my exhaustion was normal and I was, in fact, lazy?

What if I just couldn’t hack this life?

I was a young college graduate at the beginning of my career, and I was blowing it. They both knew if I pulled up the roots of a budding career, I’d never forgive myself. On the other hand, validation of my effort to make it through the day would have been equally as important. One good “‘Atta girl” could have made the most difference.

Two years later, when I finally got a diagnosis, my parents’ tune changed. They gave me space to rest, space to heal and help whenever I needed it. Frustration became facilitation, and I had nothing but support and help from them. Alas, healing only came in the parent/child facet of my life. My relationships, both platonic and romantic, suffered from endometriosis as well.

The University of Alabama School of Medicine defines endometriosis as “the tissue that grows inside of the uterus…grows outside of the uterus on other organs or structures in the body.” It goes on to explain that the tissue still acts as if it normally would inside the uterus by “thickening, breaking down and bleeding.” When endometriosis flares, each little implant has a period. So, my body was having thousands of little periods amounting to one large mega-period throughout each month.

When one hears the word “period,” it’s typically associated with mood swings – which, of course, I had. The sudden bursts of anger, sadness, paranoia or despair caused rifts between myself and friends who ultimately labeled me as “weird” or “psycho.” High school friends drifted further and further away from me. The pain and mood swings fashioned me into a less and less gregarious version of myself. Invitations to hang out slowly stopped. Heartbroken, I assumed all of the blame for every lost friendship. In my car, on the way to and from school, I’d talk myself to the point of tears.

Why are you so weird?

Why do you get so emotional and make weird decisions because of it? Control yourself!!!

After so long, I would dread the commute to school and back because I was forced to be alone with my thoughts. Even I labeled myself.

Romantic relationships became increasingly difficult for the same reasons. At times, my boyfriends would label me a “bitch” or “crazy.” Truthfully, I was, but not because it was a personality trait – my hormones were haywire. In my first marriage, though I was already diagnosed, my husband labeled me as an “ice queen” because of the lack of intercourse. Like anything that inflicts pain upon a person, I avoided it. Painful intercourse or dyspareunia is a common symptom of endometriosis and can be a relationship killer. Pain, bloating, diarrhea, urinary pain, acne from the stress and hormone surges don’t exactly invoke the sex-goddess that’s supposed to be in us women. I felt like a failure almost every time I’d attempt sex, and as soon as deep penetration happened, I would hiss in pain and retreat – profusely apologizing.

Because I felt guilty for something I couldn’t help. After every laparoscopic ablation or Lupron injection, I’d hear, “I thought you said you were fixed.” When, maybe for a time I was, but like clockwork, endometriosis symptoms would recur and it would be the same old fight over the same old thing. “You’re always sick.”

No actual label was ascribed to me during this period of my life, but there were definitely a couple that were implied: “exaggerator” and “bad wife.” To fix this once and for all was to have a hysterectomy. Once I made the decision, I was labeled by acquaintances and distant relatives as “selfish,” or I was pitied for being “barren.” Southern culture pressures young women to be mothers as soon as possible, “because life doesn’t begin until after baby.”

It’s typical of me to not adhere to traditional roles. But, to some outside of my family, the decision to have a hysterectomy before I had children of my own – especially since I was married – crossed the line of good taste. To them, I was selfish to deny my husband and my parents children and grandchildren. Don’t think for a second I didn’t take this to heart and rake myself over the coals. I felt I always came up short and was always a disappointment. I simply couldn’t win.

A “perfect wife,” I was not. More than just endometriosis ended that relationship; however, I will say the passive-aggressive comments coupled with being mocked and insulted by my spouse over a disease for which I didn’t ask left me feeling dejected and tired. Rock bottom was after my hysterectomy. He walked in the living room while I was lying on the couch, handed me my bottle of pain pills and walked out of the door.

His departure forced me to accept how low I was on his priority list. I was hurting physically and emotionally, and my husband wanted to be anywhere other than where I was. A few years later, when I was financially stable and healthy, I realized I deserved better and I ended that marriage.

In each period (no pun intended) of my life, I wish I would have handled being labeled much differently by doing the same thing for each – by being kinder to myself and reminding myself, “You are not who they say you are.” Labels are attached to describe something, but what happens to labels? They get torn off. They get wet and blur. They fade over time. Those labels were never representative of my character, personality or any other aspect of my personhood. It’s important for those around us to recognize the power of their words and the labels they affix to people.

Two months ago, I had my final laparoscopic excision of endometriosis. At 34, I refuse to let myself be labeled as anything but a warrior. My family and friends waged war against endometriosis right along side of me by encouraging me, reminding me it was OK to rest and practice self-care, helping me financially and encouraging me to write again for the sake of spreading awareness – even if they aren’t always painted in the best light. They want others to learn from their mistakes. 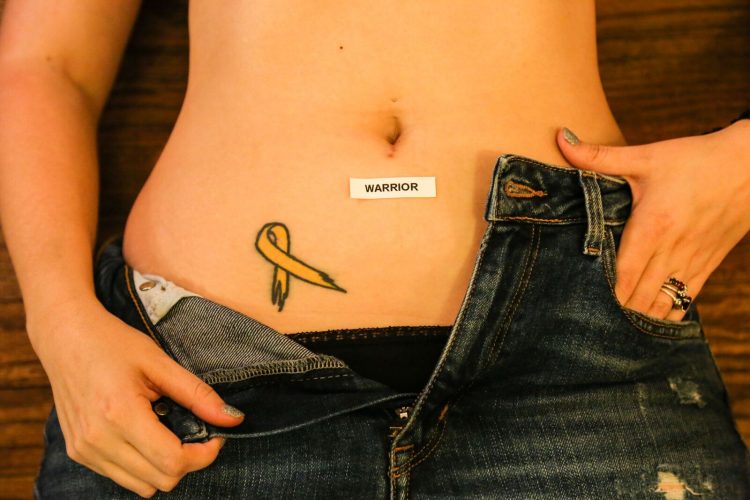 I’m now in a healthy marriage with a man who shows me every day my well-being is a top priority. When we got the news that my endometriosis was flaring after six years post-hysterectomy, he made it his mission to seek out proper care by a specialist. He drove me to and from appointments. He sat patiently in waiting rooms. He accompanied me to the exam room when I was scared, and he never once used my illness to guilt, shame or label me.

If you are a parent, and you notice your daughter is not herself, if she sleeps a lot, complains of painful periods or gets abnormally fatigued, instead of labeling her as lazy, ask her why she’s sleeping. Ask her to describe what she feels in her body.

Remember, the labels you adhere to a person can be temporary. A kind word and encouragement, she’ll carry for a lifetime.