When Endometriosis Makes the Womb Feel Like a Vampire

There goes Billy Corgan, again, a rock icon and my own personal hero, inspiring me to tell my story in one way or another. I spent a good two hours thinking of a metaphor to which I would equate endometriosis, dejected because I’ve not had much luck creatively describing what endometriosis is, let alone coming up with a metaphor for it. Until, my husband Brad switched the radio to Lithium on Sirius XM, my favorite band Smashing Pumpkinsʼ “Bullet with Butterfly Wings” started playing. Billy, at the beginning of the song, unapologetically sings, “the world is a vampire sent to drain.”

Then lightbulb went off, “God. So did endometriosis. It’s a vampire.” Endometriosis is a vampire, “sent to drain” the life from the women who are affected by it.

The vampire I picture is more like Nosferatu, contrary to the sexy, sparkly kind of late, but uglier, scarier, and sneakier. Nor is a tangle with said vamp enticing. It’s horrific and the victim is overtaken before she knows it. My personal experience with endometriosis started with bowel symptoms when I was very young. Year after year, my parents would take me to gastroenterologist after gastroenterologist (GI) in hopes we’d find a solution for my horrible stomach cramps and incontinence.

My tests and colonoscopies, “looked good.” But I wasn’t good. I accepted that my bowel trouble would be my burden to carry, but then those bladder symptoms happened about a decade later. At 26, I was trying to work and go to school, but man, that agony of trying to poop or pee really got in the way of my professional life – to the point where I lost my career over.

Ehh… another casualty. I was seeing a GI and a urologist. I had a cystoscopy to determine if I had interstitial cystitis – a painful bladder syndrome, but everything “looked good.”

My follow-up appointment with my urologist was a few weeks later and I sat in the exam table staring at the sterile white walls, I heard the door crack and my doctor walked in.

“Elizabeth, (my fancy first name) your cystoscopy was fine. You don’t have interstitial cystitis. But you mentioned you had pain after sexual activity, yes?”

“I think you have endometriosis. You need to see your obstetrician-gynecologist (OBGYN) as soon as possible.”

So I did. I had a diagnostic laparoscopy, and sure enough, it was there. After nearly 10 years of misdiagnoses because of the vague symptoms that present as other conditions, endometriosis was present – sucking the fertility out of my reproductive organs. 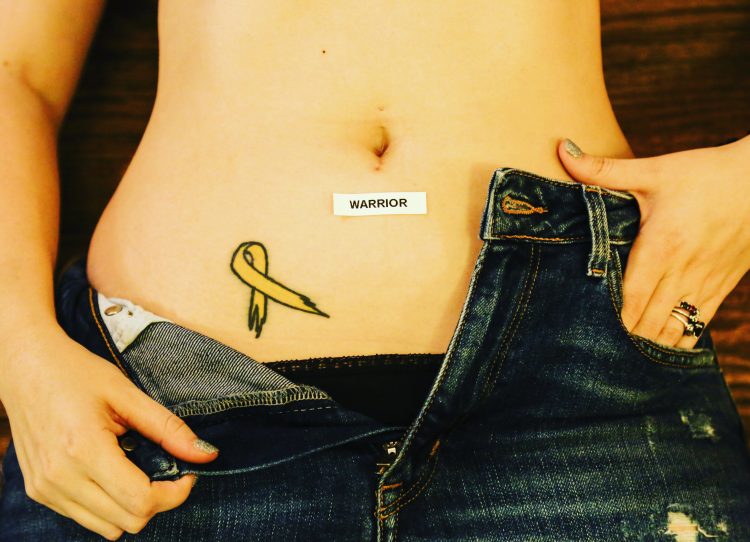 I’m lucky enough to be a part of a community of women who are also “endo warriors.” Some I know and some I’ve never met, but the one thing we have in common is that we’ve lost jobs or almost lost jobs because of endometriosis. Not only will it destroy a woman internally, but it will sneak attack other facets of a woman’s life. My career wasn’t safe. There were days in which endometriosis sank its teeth so deeply in me, I couldn’t get out of bed. I wouldn’t make to a gas station bathroom on time, I’d vomit on myself in the car because the pain was so intense – because of all this I constantly had to call in and cancel classes. I was also a graduate student and I missed too many days in my own classes I was taking. I ended up dropping out of graduate school in 2006, consequently loosing my teaching position. It was my first year out of college in the working world and 6 months in, game over.

Sucks the love right out of life.

Relationships, platonic or romantic, are hard enough for a healthy person. But man, endometriosis goes for the kill by putting strain on the very thing that keeps our heads above water – our loved ones. Hormone surges, mood swings, urinary pain, bowel incontinence, you name it. Dealing with these symptoms, at times, does not a pleasant women make. Which, of course, will alienate every loved one a endometriosis patient has. That’s the cruelest part of the disease – it won’t stop draining you until you’re not only in agony, but agonizing alone.

Stake through the… uterus?

Even vampires have foils. Stake through the heart, crosses, garlic… and endometriosis has treatments that offer relief, but no cure. Endometriosis is immortal like a vampire, ablation and excision offers the “burn it and send it to hell” that usually ends all vampire tales.

Now, there are sequels to vampire stories. I mean Vampire Lestat hung around for a while and Bella and Edward kept on with the awkward sexual tension for as many years as they could milk, but they did end. Just like I found relief with a hysterectomy and excision surgery. I feel lucky and grateful to finally have relief from my symptoms after so many years, but I also know my relief is not a guarantee. Five or six years from now, those symptoms could creep back in my life and sink their teeth in.