Stepping Out of My Comfort Zone to Find My 'Tribe'

Who is your tribe? What group can you identify and connect with in a unique way?

We all want to belong. We seek people with whom we have things in common. But sometimes, finding your tribe pushes you outside of your comfort zone.

Normally, I am not shy about trying new things and meeting new people, but when it came to attending AboutFace’s Camp Trailblazers near Vancouver, BC in May 2015, I was nervous. For the first time in my life, I would be part of an assembly of people most of whom had one thing in common: facial difference.

Attending this event was forcing me outside of my comfort zone, and that was, well, uncomfortable.

I had reservations about going. But why? I’ve had partial facial paralysis all my life, due to a removal of a tumor shortly after birth. One might think I’d be delighted to meet others who share not only what I’ve been through, but also what I live with on a daily basis.

It’s not that I’m afraid to meet other people with facial differences. I’ve driven miles, even hours, out of my way during vacation trips to meet up with individuals I’d developed connections with online, but usually only one or two at a time. There was something daunting about meeting an entire group all at once. 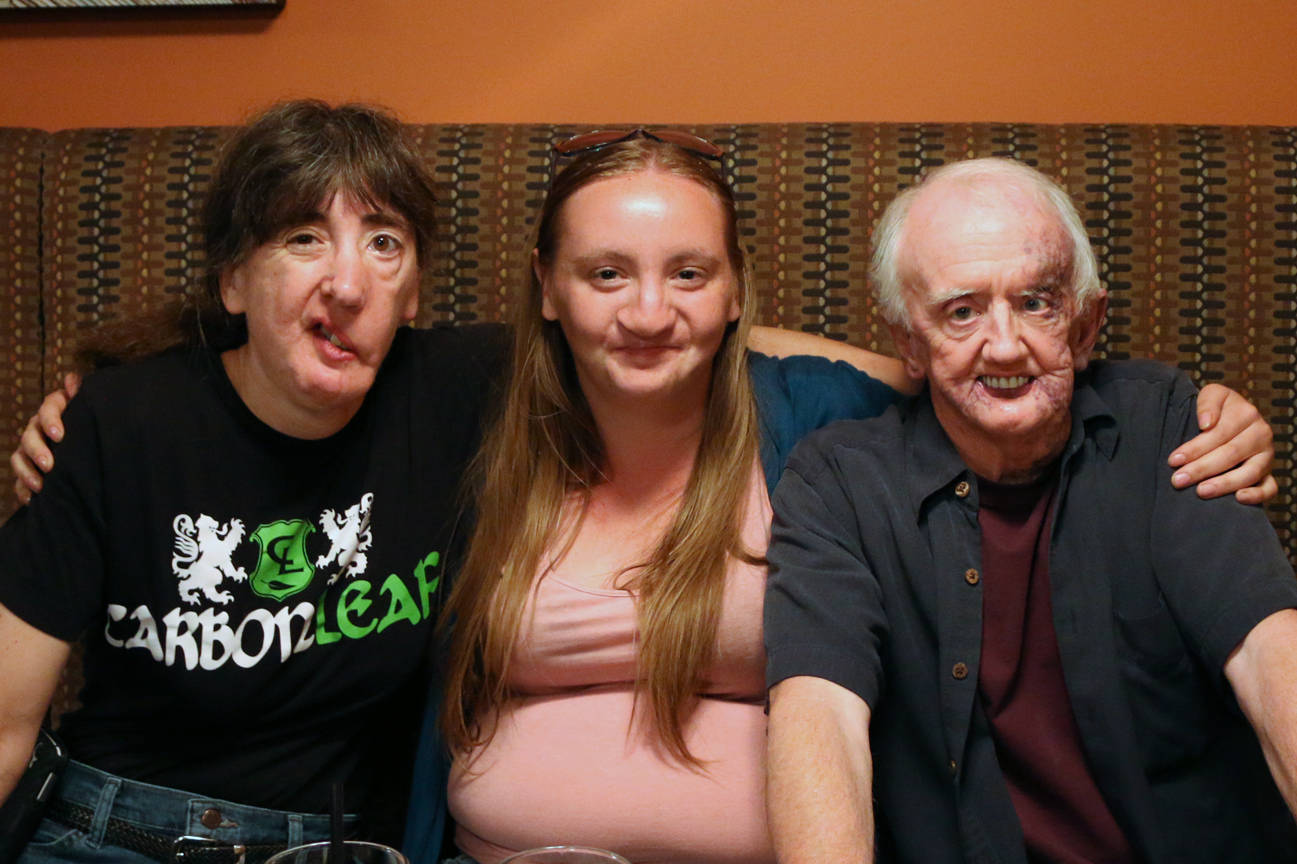 I’ve been known to drive miles, and hours, to meet in person people I’ve become acquainted with online, such as Pauline and David.

When it came right down to it, I was afraid of losing my uniqueness. For most of my life, I didn’t have opportunities to  interact with other people that have facial differences. Because I have a degree of confidence and acceptance regarding my appearance, I am comfortable with the fact that my face helps me to stand out. I like to be unique and don’t mind being recognizable. In fact, I use it to my advantage when I can. It wasn’t until I became active on social media that I discovered how many others with facial differences are out there. In a whole group of people with nonstandard visages, however, I feared that one aspect of my uniqueness would be taken away.

I was also concerned that I would experience role-reversal. Instead of having people stare at me, I’d be trying hard not to stare at everyone else!

What solidified my decision to attend was that there were two people attending whom I knew and considered friends. Secondly, because the camp was focused around young people, it was an opportunity for me to join other adult attendees in demonstrating that someone with a significant facial difference can still live an interesting, productive, and happy life.

Upon arrival, I initially stuck with the people I knew. But once we all started to interact, I felt increasingly like I was coming home. An incredible sense of community was created, and instead of being among strangers, I began to feel like I had found my tribe. There really is no replacement for people who have shared similar experiences — the hospital stays, the way we are looked at and treated by others, and our relationship challenges to name a few.

Stepping out of my comfort zone wasn’t such a bad thing. In fact, it turned out very well. By the end of the weekend, I had partaken in some wonderful and insightful conversations, fun activities, and most importantly, I’d made new friends.

I also knew I would never feel awkward going to a similar event in the future, even if I didn’t know anyone else there.

Who is your tribe? If you haven’t already, don’t be afraid to go find them. The rewards, and sense of community, are worth the effort.

dawn-shaw
Want more of The Mighty?
You can find even more stories on our Home page. There, you’ll also find thoughts and questions by our community.
Take Me Home