There is one day of the year that comes to mind when I think of my most important day. May 12th is Fibromyalgia Awareness Day and over the past four years I have made that day my marathon, I have made it my goal and my passion. Between articles that people have written about my fight with fibromyalgia and getting Fibromyalgia Day officially proclaimed in the state of Massachusetts by the Governor due to my efforts, each year I push and push to be heard. I put all of my pain and energy into this one day because it makes me stronger and gives this invisible disease a voice for the people who can’t express it.

Before I was an advocate positively pushing for awareness I was miserable and resentful towards my pain. Getting out of bed in the morning was not a task I was willing to do, never mind putting a smile on my face. I completely and utterly hated my life and didn’t see a point in why I would want to continue to live the rest of my life if it was just going to be painful and hopeless. My hope and energy had been strung out on waiting for the diagnosis that even doctors were wary of accepting. I was left out of everything and missed every milestone in being your average high schooler. I couldn’t do the things I loved anymore and felt so distant from everyone. I was alone and I hated that. Nobody understood my pain until one late night I was up late on the computer waiting for a flare to pass and I googled fibromyalgia support groups.

I attended Boston Children’s Hospital’s “Comfort Ability Workshop” in 2014 where I met about 20 other people around my age dealing with the same or similar things I had. Their guest speaker was someone a few years older than me who had really pushed and pushed to put her pain aside and become an advocate. In that moment, I knew that’s what I needed to do. I needed to turn my pain into passion, and not even a year later on January 11th, 2015, I was their guest speaker turning my pain to passion. I even won an award from BCH for my work with the families there. 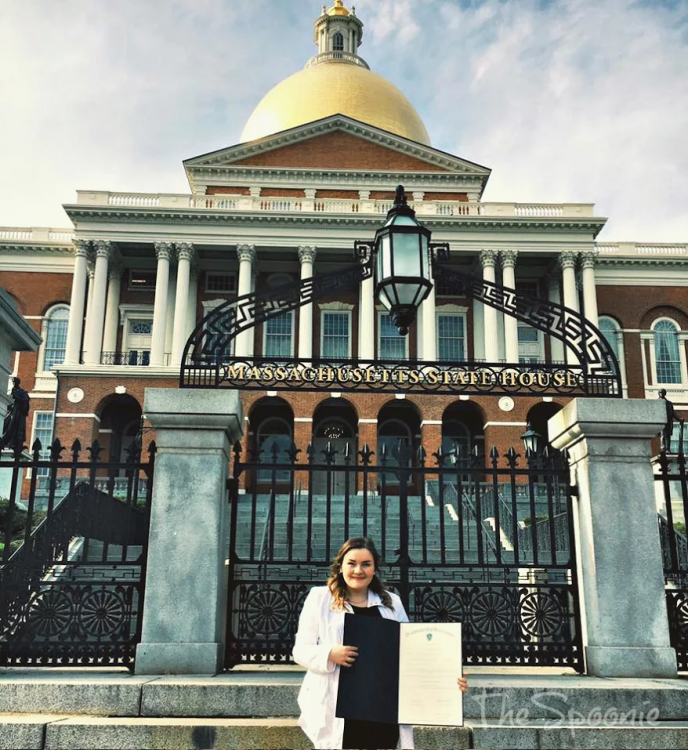 Every day I fight a battle I never signed up for. Everyday I have the choice to be angry, sad and resentful like I once was about my life. Every day I choose to push forward with all of the strength I have within me so someday my awareness and my efforts to make fibromyalgia’s pain known saves someone from feeling that hopeless feeling I once felt. Nobody should have to feel that way. Nobody should have to get up in the morning and question “what’s the point?” because of their pain. My illness has brought me to my knees with pain and sadness, but it is also the reason I have a purpose. My illness does not define me, but it does push me to want to be a better person. It has taught me a new layer of empathy and compassion that some people don’t get to see in their lifetime. I want to be strong. I want to get up and fight this battle and I want to win it. I want people to hear me and know that my pain is not invisible. My pain is not something to be ignored and neither is the pain of thousands of others who struggle in silence.

So please join me in raising awareness for Fibromyalgia Day on May 12th, 2017. Fibromyalgia’s color is purple and I would love to see as many people as possible supporting the awareness by wearing purple or showing support in whatever way they can. Let’s raise awareness so less people have to fight this unwanted battle alone.

I'm an twenty-something-year-old spoonie living with Fibromyalgia, Endometriosis, and Hashimoto's Disease. I am an advocate living in Massachusetts and I love raising awareness for chronic illnesses and giving a voice for the people who can't.