Surviving on Cornstarch: My Life With Glycogen Storage Disease

I am 23 and I live in Christchurch.

I was diagnosed with a rare liver disorder called glycogen storage disease type 1b when I was 3 months old.

My doctor had referred my mother to take me to the hospital, concerned that I was failing to thrive. I had poor growth, low blood sugar levels, a greatly enlarged liver, abnormal blood tests and what they described as a “porcelain doll” look. 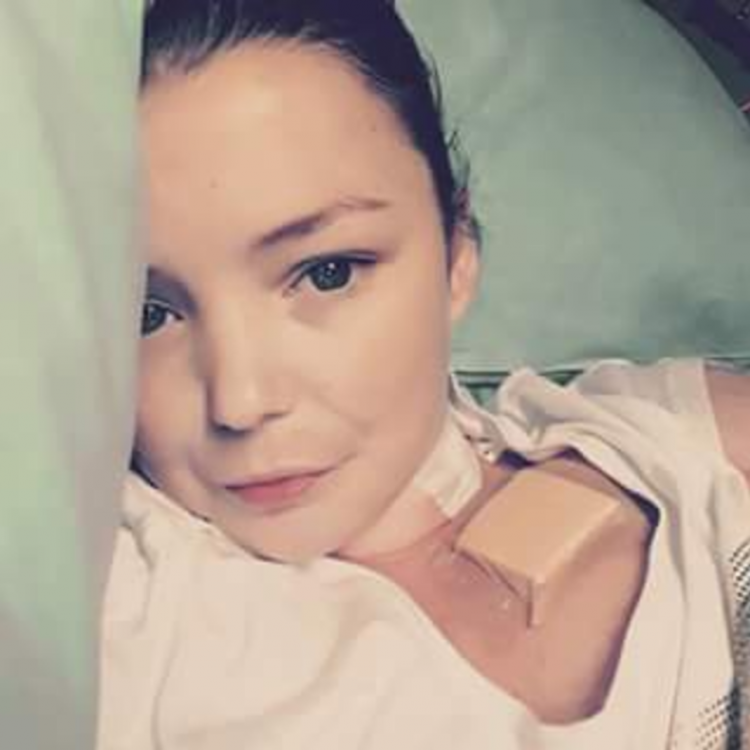 My doctors called specialists in Florida to seek help on a diagnosis. They came to the conclusion that it could be GSD. They took a biopsy of my liver and sent it to Melbourne, Australia to be tested, and sure enough it was.

I was given regular tube feedings until the age of 9, then switched to cornflour orally. I was in and out of the hospital as a child and as an adult too, having over 150 admissions to the hospital. I have had many operations, procedures and medications throughout my life.

Very few people in New Zealand have GSD and type 1 only occurs once in approximately every 100,000 births. This disease is genetic and caused by both the mother and father passing along this particular mutated gene. They don’t need to have this disease to be a carrier. If they were to have a child, there is a one in four chance the child will have the disorder.

The main function of a person’s liver is to make and store fuel from the carbohydrates they eat, such as rice and potatoes. Some of the glucose produced travels into the blood and the rest into the body where it is used for energy.

The liver of someone with GSD type 1 does not perform this function. We are missing the enzyme that allows this process to happen.

The deficiency impairs the ability of the liver to produce free glucose from glycogen. Since these are the two main metabolic mechanisms by which the liver supplies glucose to the rest of the body during fasting, it causes severe hypoglycemia and results in an increase of glycogen in the liver or kidneys leading to enlargement of both.

Both organs typically function normally in childhood but are susceptible to a variety of other problems in adult years.

Frequent feedings of cornstarch or other carbohydrates is the main treatment. I have to take 80 grams of cornflour every five hours. I have never had a full night’s sleep. Cornstarch contains the highest amount of carbohydrates (one tablespoon contains nine grams of carbohydrates) and when taken raw it is hard for the body to digest, therefore giving me slow releases of energy.

I go through approximately eight boxes of cornflour a week and over my life time I have consumed about 1328 kilograms (~2928 pounds) of it. To visualize this, it is estimated to be about 17 average-size bathtubs packed full of cornflour! How can anyone take this disease seriously when our medicine is a gravy thickener bought at your local supermarket?

The main danger of not taking cornstarch is hypoglycemia. It is the central problem and the one that is most damaging. Any seizure can cause severe brain damage or, even worse, death. Having chronic low blood sugar can cause you to develop tumors in your liver called adenomas, typically becoming cancerous if not dealt with fast enough.

Without treatment, growth failure is common due to chronically low insulin levels. Intestinal involvement can cause mild malabsorption. I was diagnosed with Crohn’s disease at the age of 16 due to this and struggle with all of the above also.

Neutropenia is a manifestation of this disease. I have a very low white blood cell count and even though I am on daily injections to boost my immune system I still pick up infections and viruses easy. Without adequate metabolic treatment, patients with GSD type 1 have not made it to adulthood, and up until 1971 this disease was completely fatal.

Those who survive may be stunted in growth and delayed in puberty because of chronically low insulin levels.

I am now on my 184th hospital admission since birth. I have been living here in the hospital for three months and am now awaiting a liver transplant to save my life.

There is no cure.

We need to raise awareness and funding!

Doctors in medical school often don’t get taught about GSD; it gets a mention in passing, at best. Here in New Zealand no one has released anything about the disease and I want to change that! I want to raise money to help doctors and their teams.

I am hoping to write and publish a book on living with GSD as another way of raising awareness. Every little bit helps. If I could walk into a hospital and have the doctor or nurse already be aware of my condition, it would blow me away.

I would not wish this condition on anyone.

However, as much as I despise the disease, I would not change a thing as it has made me who I am today.

I suffer from a rare liver disease and can relate to a lot of these stories . I also am writing my own book about my journey so it is good to get inspiration on different ways of writing things.

ashleigh-lilley
Want more of The Mighty?
You can find even more stories on our Home page. There, you’ll also find thoughts and questions by our community.
Take Me Home