Someone Stole My Daughter's Walker

Since my daughter Iris’ diagnosis at age 5 1/2 with GM1 Gangliosidosis in the fall of 2013, I’ve become oddly accustomed to living life with GM1. It’s a hard reality knowing she has a fatal neurological condition. Still, after three and a half years, for my sanity, I’ve partitioned that reality into the recesses of my mind.

Iris has the juvenile onset form of GM1, which is less severe than other forms of the condition. We hope she will live into her mid-teens, 20s, or possibly longer. But GM1 becomes progressively worse as time passes. GM1 destroys the central nervous system, which in turn impacts pretty much every basic body function.

We cope as best we can. We try our best to lead a happy existence despite our daughter’s grim diagnosis. We constantly remind ourselves to enjoy our daughter and the time we have with her.

As we have learned to live with with GM1,  we’ve found a new “normal” on repeated occasions. What might seem incredibly scary, like watching your child lose the ability to walk, is bizarrely just a part of life.

However, today was not “normal.”

Today, someone stole my daughter’s walker from a store parking lot. In a very brief lapse, the walker was accidentally left behind in the parking lot by the handicap spot. Realizing this mistake, Iris’ father returned immediately to the store. It was only a matter of minutes before he turned around to retrieve the walker.

Upon returning to the store, the walker was not in the parking lot, and it was not in the lost and found. After speaking to security at the store, we were told security video footage recorded the theft. Three people on the video were involved: the driver of a car and two people who grabbed the walker.

Immediately, following diagnosis, we could not help but ask “why?” GM1 is estimated to occur in approximately one in 200,000 live births. Some statistics indicate it may be even rarer. On the good days, we generally don’t ask “why” anymore. Today I asked “why” once again.

Why steal a child’s walker? It was in the parking lot right by the handicap spot. Why not bring it to lost and found?

Perhaps it seemed worth pawning? Online, it is $625. Perhaps someone felt truly desperate for some reason which is unknown to me.

For my daughter, the walker is worth far more than $625. Her walker is part of her freedom and not having it is life-altering. The walker allows her to walk somewhat independently at school. The walker helps her maintain as much muscle tone as possible. Walking helps preserve aspects of her health. 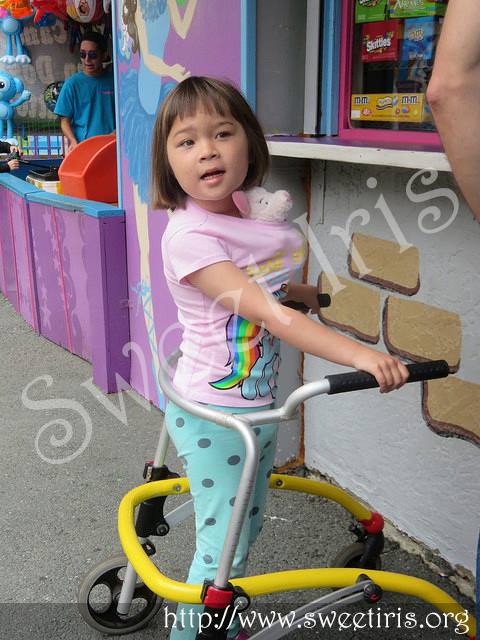 Stealing is wrong. Stealing children’s medical equipment is the low of the low. While this might seem as a petty crime, there’s a story behind that bright little yellow walker accidentally abandoned in the parking lot.

There’s a story of a little girl fighting for her life. There’s a story of somewhat frazzled parents. We hope the police can track down the walker. If not, we will navigate the process of getting a new one. We’ve been there and done that. We know the drill.

But I am angry about the walker.

Christine Waggoner founded the Cure GM1 Foundation in April 2015 in honor of her daughter Iris and all the children who suffer from GM1 gangliosidosis. She resides in northern California in the San Francisco Bay Area.