They Said She'd Never Walk. Look at Her Now!

My daughter, Hartley, was born with hydrocephalus and agenesis of the corpus callosum, which means there’s no connection between the two hemispheres of her brain. Some in the medical field told us she might never walk, talk or be able to feed herself. But we found out about Early Intervention (EI) when Hartley was about 6 months old, and they began to work with her and push her to her limit. She was late in all her developmental milestones, but EI made a difference in the first three years of her life.

Then in 2007, just when we thought the worst was behind us, we encountered yet another obstacle. Hartley was diagnosed with basal cell carcinoma nevus syndrome. She doesn’t have the gene that protects her delicate skin from the sun. Her body is constantly developing basal cell cancers. She’s had more than 500 removed since her diagnosis. Another result of this syndrome is tumors that develop in her jaws. She’s had five jaw surgeries since 2007, and eight tumors have been removed as well as nine permanent teeth that were encapsulated in the tumors. 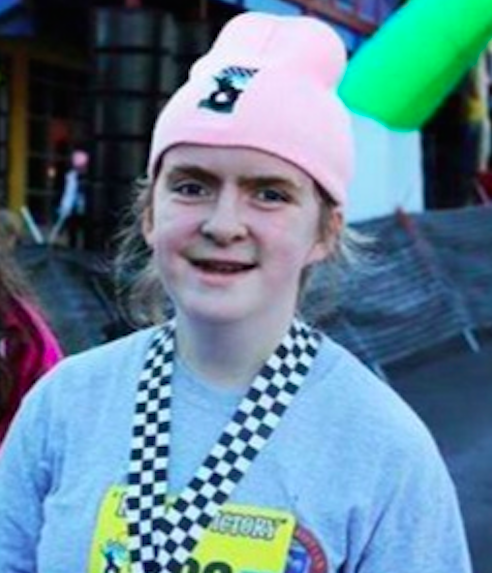 Despite this, she’s one determined girl. She ran her first 5K in 2013. It was a fundraiser for a summer camp where she’s been a camper. It’s called Victory Junction, and it’s a wonderful camp for children with chronic medical issues.

The day of the 5K is a day I’ll never forget. It was a cold and foggy October morning. There was so much energy and excitement in the air. We knew we weren’t going to break any records or take home any medals, but finishing and having fun was our goal. When Hartley and I rounded the corner to the finish line, she said to me, “Come on, let’s run together!” As we were running side by side, the emcee came over the loud speaker and said, “And here comes Hartley Plyler! She’s been a camper here for the last few years. Let’s cheer her on!” At that point, Hartley started running faster and left me behind. The emcee said, “Look at that stride! She looks like a gazelle!” I broke down in tears because I was overcome with emotion. As she crossed the finish line, everyone celebrated with her.

As we celebrated, the memories came flooding back. The time when she was a baby and we learned about her diagnosis and that she might never walk. Learning to sit up on her own when others her age were walking. Starting to crawl while her peers were hopping and climbing steps. Using a push toy train to hold herself up as she walked behind it. Tooting its horn with every step. I remembered the day she came to me in our kitchen and finally let go of her toy train. She was 22 months old when she took her first steps. Soon afterwards, we hiked on Roan Mountain, and she walked that part of the Appalachian Trail without any help. We celebrated reaching the top of that mountain for many of the same reasons we celebrated after the 5K.

Lucy lives in North Carolina with her husband, Charles. They have three daughters: Lorrin (26), Ana (23) and Hartley (17). Lucy is a social worker for the blind. Her favorite thing to do is shop at Goodwill and thrift stores.

lucy-plyler
Want more of The Mighty?
You can find even more stories on our Home page. There, you’ll also find thoughts and questions by our community.
Take Me Home