I remember the conversations I had with staff at my gastroenterologist’s office.  “You’re a medical student here? And a patient?”

“And never the twain shall meet,” I’d answer.

To put it bluntly, the twain went ahead and met anyway. After my diagnosis at age 15, inflammatory bowel disease followed me like a specter through adolescence and adulthood. I fought it ferociously, even after a total colectomy failed to quell the immunological war my body waged on itself.

As a budding clinician, I longed to shed myself of my illness and leave it forgotten in some dark mental corner. My experience as a patient, I reasoned, was a professional liability and nothing more.

Paradoxically, my condition worsened after my first year of medical school. In the course of a year, I underwent eight surgeries in rapid succession, healing just enough from one to begin another. As my time on the patient’s table skyrocketed, I was sure the pace of my learning would plummet just as quickly. I was surprised to find that I was very wrong; it was just the curriculum that had changed. 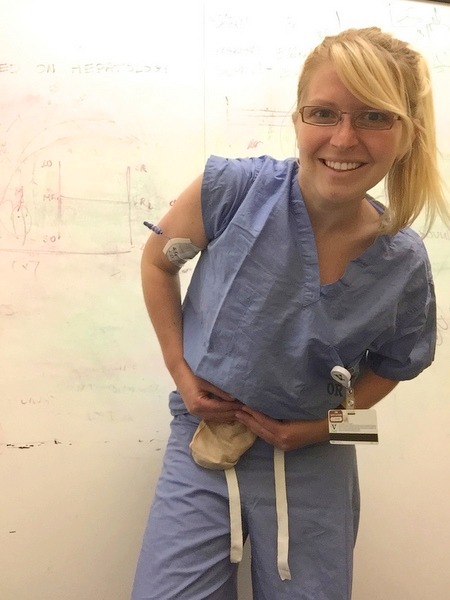 Ritual is inherent to the patient experience, from the pills in hand each morning to the mindless perusing of magazines in a waiting room, a studied facade of leisure. My year brought a new set of rituals: the careful, quiet way I’d remove my surgical staples in the bathroom so as not to upset my family, the sour, metallic taste in my mouth when I pushed saline into my PICC line, tucking my ileostomy into the waistband of my shorts. Still, my most pervasive ritual was that of guilt.

Physical or mental, no one brings illness upon himself. The experience of living the life of the very sick, however, is shackled to moral weight, the inescapable, unanswerable question: What have I done to make this happen?

I ruminated, almost constantly at times, about the burden I had placed on those around me. I told my parents to avoid the hospital and go on vacation.  I told my partner he should see other people. They all ignored my requests, but I couldn’t shake the shame, the feeling that I had somehow willfully turned myself into an overeducated couch potato. I ached hearing my classmates’ complaints about late nights in the library as I physically struggled to sit up in a chair.

My hospital roommate during my last surgery was a spunky, unfathomably kind girl with short pink hair cut close like a pixie. She had ostomies — two or three, I could never remember — and she watched the Food Network almost constantly, a digital replacement for the food she hadn’t tasted in almost a year. We were fast friends, playing pranks on our beloved nurses and blaring old Will Smith songs from our tinny phone speakers. She had only inches of intestine left, and her surgeon had been surprised to find six fistulae and widespread infection. “When I got in there,” he said to her, “You were one of the worst cases I’ve ever seen. I did the best I could. It’s been an honor.”

One night, as nutrition pumped into her veins, she suddenly turned to me with tears in her eyes. “I should be working,” she blurted out, “I want so badly to be working.”

There it was, the same guilt I had harbored all year, present even in a woman whose condition was undoubtedly life threatening. I comforted her, but I knew the feeling would likely linger long after our conversation faded to the quiet hum of hospital machines.

From the outside, it is very easy to see that disease, both physical and mental, comes about through no fault of the patient. It’s also easy to understand that when a patient’s life diverges from the easiest, most predictable path, it is not under the control of anyone on Earth. I am learning, however, that illness can affect us emotionally as deeply as it does physically, and that disease does not erase our drive to be independent, productive creatures. It is imperative that those who care for the sick, from nurses and doctors to parents and family members, care for this emotional place with the same devotion as they tend to the physical.

As for patients, let me be the first to remind you today: Your illness was not your fault.

Jessica Burris is a medical student and advocate for patient-centered research. She lives in Nashville, Tennessee, and enjoys reading and all outdoor activities.