The winding, twisting Generals Highway rollercoaster into Sequoia National Park in the early June heat was almost more than I could bear. The nausea, heat, and hunger were suffocating me.

“I know what you need,” declared my husband. A moment later relief was mine, thanks to the cold ginger ale and roasted mixed nuts he handed me.

I was well prepared to take on the day with pain relief gel, Norco, Zofran, compression wear, trekking poles, a wide brim hat, sunscreen, sunglasses, and a folding camp chair.

My husband carefully planned the day trip to celebrate our daughter’s birthday while accommodating my needs in the most family fun way he could conceive. She and I were in full agreement he deserved high praise for his planning and execution.

After filling up on sandwiches and fruit from the trunk of the car, they prepared to board a shuttle to take them to the starting point to climb Moro Rock while I was to be left behind by design to fend for myself in and around the Giant Forest Museum.

“Uh, oh,” said my husband. “No cell service. Not even 4G. We won’t be able to text each other if you have any problems.”

“Don’t worry,” I responded. “If something happens and I need to be taken away by ambulance, I’ll leave you a note on the car.”

No note nor ambulance were necessary. I was fine. I explored the museum, walked a safe distance down the Big Trees Trail, marveled at The Sentinel standing guard in all his red bark uniformed glory, empathized with the delicate spring flowers dwarfed by the sequoia celebrities of the forest, and hid in the shadows from the onslaught of the sun lest my lupus rear its ugliness upon my cheeks. I like butterflies as much as the next person, but not sprawled out across my face.

My favorite part of the nature experience was the fragrance in the air. It wasn’t overpowering where I could end up with a migraine the size of Moro Rock itself. It was gentle, subtle, yet masculine. If I could bottle it, I would douse my husband with it. It was the perfect mix of sequoia, cedar, and pine with a hint of something else I had trouble identifying, an earthiness from life-giving soil that tied it all together. 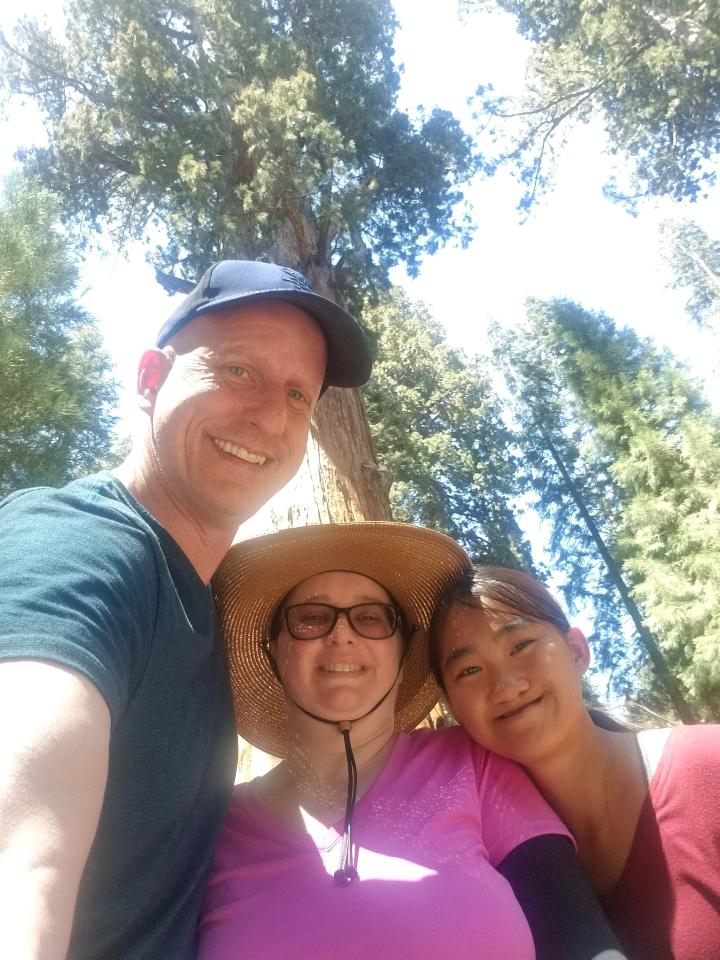 The other two returned excited to show me the photos and videos of their climb and happy to see I was still in one piece.

The next stop was General Sherman. The tree’s massive size was not as daunting as I expected. Instead, it was simply grand in its stature. It seemed proud in its notoriety as a living creature admired for its capacity to survive and grow for over 2,000 years and become the largest living thing on earth. My daughter remarked about how it brought people from around the world to this very spot just because it exists. We heard languages from multiple continents in that one stop alone.

Those two continued on a path easy for them but too much for me. Besides, my inability to completely hide from the sun coupled with the miles I had walked as gently as I could were beginning to take their toll. I could feel myself turning into a grumpy bear from the growing pain and fatigue. I wondered if my family would leave me there to reside with the other bears in the mountains. I sat down on a bench to rest.

That’s when it happened. Head hung low, eyes closed against the tourist chaos, a deep sigh released as if it could dissolve my fatigue, I felt it – someone was watching me. I slowly lifted my head and opened my eyes to see a girl, 4 or 5 years old, staring at me. Her long auburn hair was more out of her braid than in. Her beautiful brown eyes were partially hidden under her furrowed brow deep in thought. Her clothes dirty from that perfect soil she obviously played in throughout the park as a child should.

Her features suddenly changed dramatically. Like the big bang birthing the universe, she gave me a bright smile and an explosive, “Hi!” It was magnificent! A sharing of joy!

I couldn’t resist. I smiled back and responded in kind, “Hi!” I didn’t believe her beautiful smile could get bigger, but it did. Her goal of making this sad looking woman happy was accomplished! She was proud of herself! She turned and skipped off to join her parents.

The simplest gesture was a cherished gift from an unknown girl to me on my daughter’s birthday. How sweet!

We moved on to General Grant, our third and final stop of the day. That tree seemed more sublime than Sherman, more in tune to the plights of the sightseers below. Walking around it, I could see why.

Colonel John White, park superintendent from 1931 to 1947, once said of the General Grant tree, “The tree is a pillar that is a testimony that things of the spirit transcend the flesh.”

General Grant has what many trees in the Giant Sequoia National Park have – burn marks from lightning strikes showing significant damage. What makes these giants of life, these magnificent soldiers of evolution, so amazing is their ability to carry on, to grow amidst the trials and tribulations of fire, flood, drought, insects, and disease. They live not without physical challenges but in spite of them.

Sarah Hauer is a self-published author and is battling Lupus, ITP, Hughes Syndrome, IBS, and Fibromyalgia.

sarah-hauer
Want more of The Mighty?
You can find even more stories on our Home page. There, you’ll also find thoughts and questions by our community.
Take Me Home