16 Voices From the First National March for Mental Health Dignity

On August 25 in Washington, D.C., for the first time in U.S. history, mental health groups and individuals from across the country joined forces to march for the dignity of those who live with mental illness.

The event was organized by Destination Dignity, a collaborative project spearheaded by groups like The Campbell Center, The Center for Dignity, Recovery and Empowerment, Copeland Center for Wellness and Recovery, Mental Health America and the New York Association of Psychiatric Rehabilitation Services. The driving idea behind the event: mental health is as a basic right, and those who experience mental health issues deserve to be treated with dignity.

At a rally at the National Mall, speakers addressed issues like high levels of unemployment, incarceration and homelessness among those with mental illness. Destination Dignity hopes to bring attention to issues like underfunded mental health services, negative portrayals of mental illness in the media and a fragmented mental health system that often requires a person to be in crisis to access help.

For those who attended the event, it was a chance to be part of the first national movement of its kind for an issue that historically has been left in shadows. The Mighty spoke to some supporters about why they were there to support this cause.

1. “I’m here to show we’re people just like everyone else.” — Stephanie Sikora, from Pennsylvania.

2. “I’m a person with mental health challenges who was institutionalized for on and off for 17 years before escaping to live on the streets. I believe we need to overcome the stigma of mental health, see all people as people with abilities and all people as active community citizens.” — Gina Calhoun (right) with her husband Scott Heller (left), from Pennsylvania.

3. “There’s strength in numbers. We’re proud to be a part of this movement, to demand dignity. I’ve been living this cause for 40 years now and finally there’s a group to join to be a part of it. The one thing I think needs to change is we the people, and then the government will follow.” — Lee Shuer (right) with his wife Becka Shuer (left), from Massachusetts

4. “I was technically homeless myself for a year and half. I want to speak out for people and help them. I want people to know there’s hope.” — Terry Wasnick (left), from Minnesota.

5. “I came today to support people with mental illness. To show support for friends, family members, coworkers and let them to know it’s OK to be ill. It’s OK, and there are people around you who can support you.” — Sherin Elsait (right), from Pennsylvania.

6. “I think this is one of the civil rights issue for a whole host of reasons hasn’t made it to the forefront. People are being discriminated against and being dehumanized for conditions that are no fault of their own. I think it’s long overdue that people recognize we are all people first.” — Aiden Altenor, former Director of Hospital Services in Pennsylvania.

7. “I’m here today because there’s a crisis in this country. People in our culture understand the importance of physical wellness, but our mental and emotional wellness is treated only after people have hit poverty, lost support or have reached a breaking point. You can’t heal by separating (people with mental illness) from their communities. The best way to help people recover is to see their dignity, see their personhood and work with their community.” — Matthew Federici, executive director of the Copeland Center for Wellness and Recovery

8. “Growing up, before I was diagnosed in 2012, people wanted to say I had a problem. I was dramatic. There was something wrong with me. And when I was finally diagnosed I realized I don’t have a problem, I just have an illness, and I began my road to recovery. That’s why I’m here today.” — Latesha Higgs (left) with her friend Laquisha Hall (right), from Baltimore.

9. “People matter. Why is it that suicide is so compelling? Why do we have to wait for someone to kill themselves for it to be a story worth talking about? What happens when someone becomes homeless and all of the sudden they don’t matter anymore? People are people.” -Theresa Nguyen (left), from Mental Health America.

11. “Mental illness is a issue that’s usually hidden. It’s important to make the noise and bring attention to it.” — Natasha West, from Stamp Out Stigma.

13. “Equality. We should treat everyone the same.” — Brandon James, from Delaware 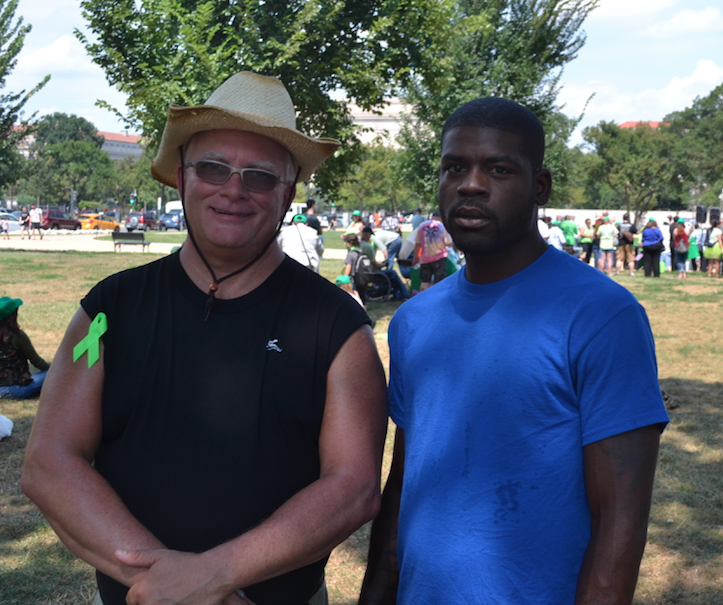 14. “Recovery is possible. There’s a lot of people who see it as out of reach, and we need to let them know it is in reach. It does happen. We need to spread hope.” — Milton Schladorn (left) with Travis Lundwall (right), from New York

15. “I want to feel empowered. I want to gain my dignity back that I lost years ago. I suffered from a serious mental illness for many years and I’m recovering now. I’m becoming an even better more productive member of society. I want to show how strong I am.” — Emily Turner, from New York

16. “I’m coming out of my shell, so to speak. I’ve been diagnosed with bipolar disorder. My son was diagnosed with a mood disorder this past year, too. It’s really important for him to be here too. We can do amazing things with our lives, and we do.” — Julie Erdman with her son Eamon, from New York

To hear more voices from the event, follow the hashtag #MHDignityMarch.