18 Mental Health Questions We Want to Ask the Presidential Candidates

Listen up, potential President of the United States — we want to talk to you about mental health. No, not as a subset of the gun control debate. Mental illness affects about 61.5 million Americans, and we have some issues we’d like you (and other elected officials, for that matter) to address as we approach the election year.

So at the convenience of future debate moderators, we asked our readers what mental health-related questions they’d want to ask the presidential candidates.

Here’s what they had to say.

On mental illness and prison:

1. “What will you do to make sure prisons aren’t continually used to hide people with mental illness?” — Shawn Henfling

2. “What impact does the for-profit prison industry have on the high rates of incarceration in this country, particularly the incarceration rates of those with mental illness?” — Paul Banuski

3. “Housing the mentally ill in prison is unacceptable. What plans do you have for other treatment options?” — Rebecca Chamaa 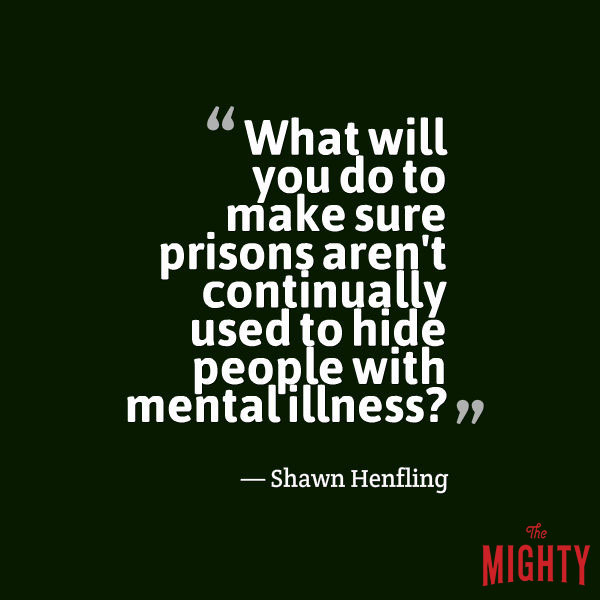 On the connection between mental illness and gun violence:

4. “Will you comment on the fact that nearly two-thirds of gun-related deaths in this country are suicides and not homicides, and does that information change the way you approach the issue of the proliferation of guns?” — Paul Banuski

5. “Will you agree to end mental health stigma by ending the practice of speaking about mental health issues in the context of gun violence and start discussing the real problems with our mental health system in the U.S.?” — Dolores Sanchez, Founder of Mental Health Justice 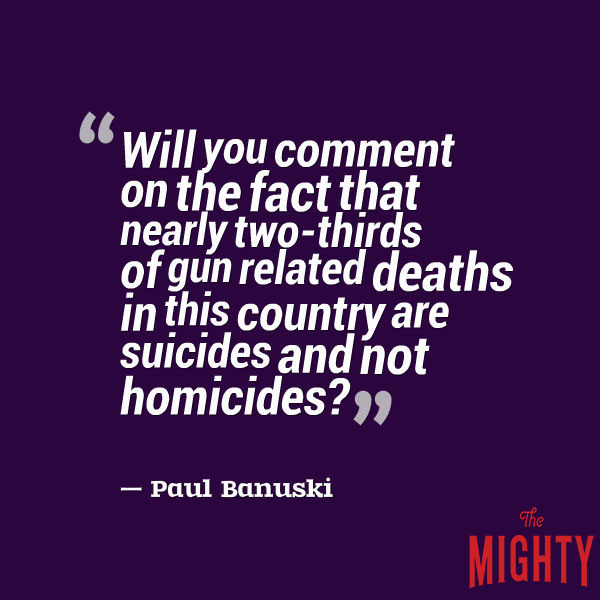 6. “When will there be more affordable medications? — Theresa Lafar

7. “How can you make mental health treatment more affordable for the uninsured and underinsured?” — Erica Mcclellan

8. “How would you address the shortage of qualified mental health care providers?” — Lindsay Ballard 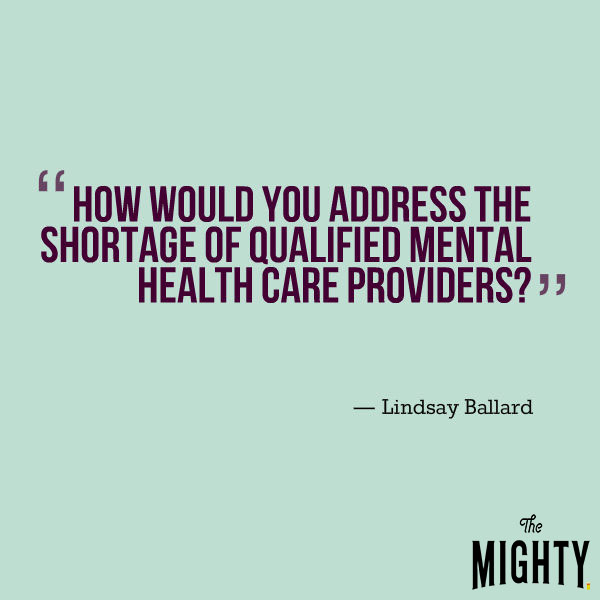 9. “What will you do to make mental health care a priority in this country? How will you make it more accessible?” — Nikki DeMeyers

10. “What do you consider your priorities when it comes to mental health reform in the U.S.?” — Gen Somers

11. “Can they explain why, despite the great need, mental health care feels like an afterthought rather than a priority?” — Julianne Leow 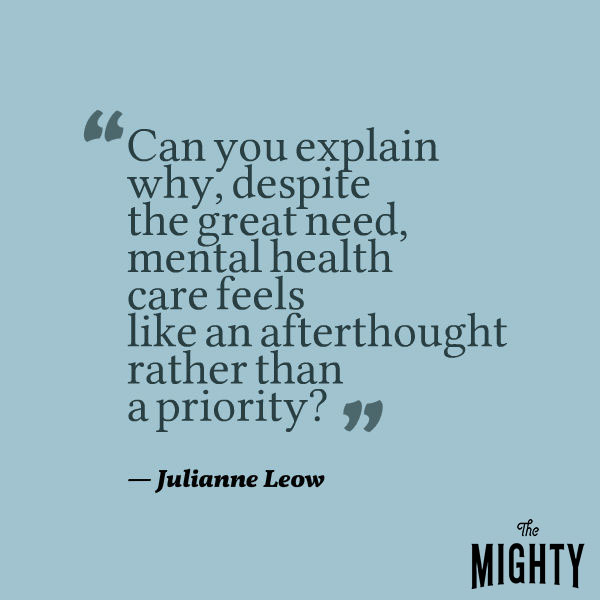 On mental health and our veterans:

12. “How are you going to help lower veteran suicide rates?” — Bridget Flynn

13. “Veteran mental health care seems to be at a loss if you talk to the vets. I’m curious, how is this being addressed?” — Mark Maya 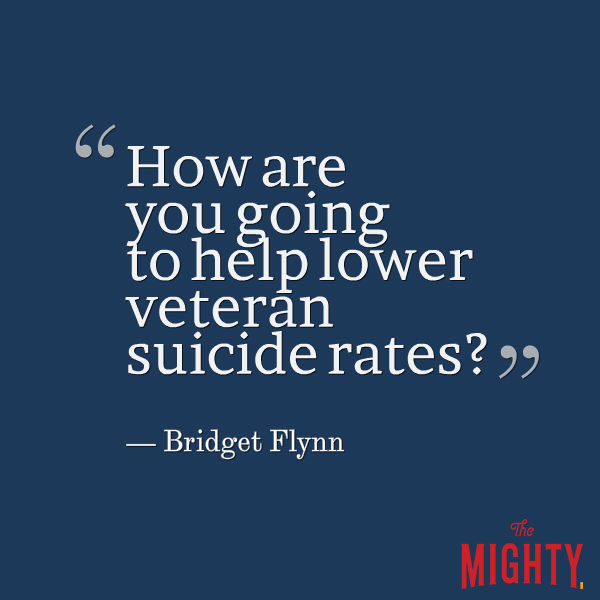 On helping those who are have a serious mental illness:

14. “What will you do to reprioritize those with series mental illness who continue to be filtered out to prisons and homeless shelters?” — Deborah Mihalik Geesling

15. “Why is money being spent on the fluffy stuff like pamphlets instead of being redistributed to help those who are seriously mentally ill?” — Alicia Renkema 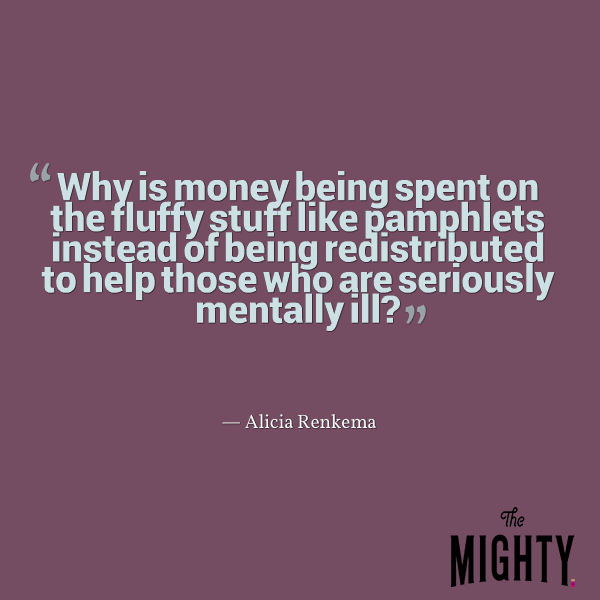 16. “How would you help eradicate mental health stigma?” — Erica Enos

18. “How would you make mental health a global priority?” — Emilyanne Wachter 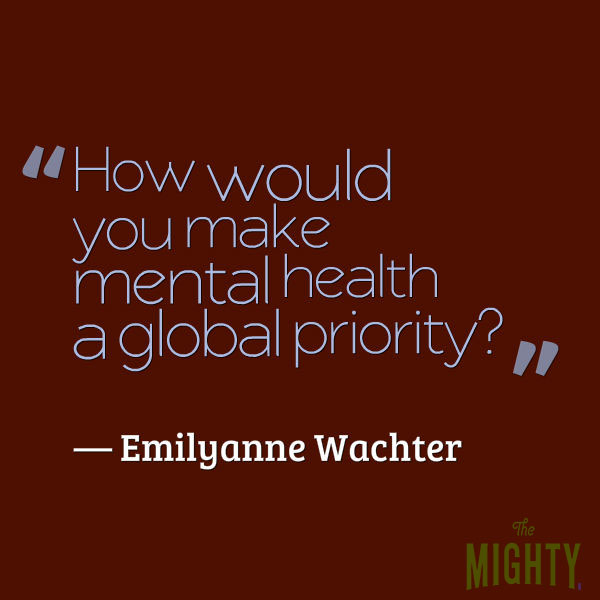 Have more questions? Drop them in the comments below:

Related: The Only Time Mental Health Was Discussed During the Democratic Debate