The 'Insult' That Empowered Me to Accept My Disability

I had been having a very rough week. I battle major depression and general anxiety, and have for most of my life. A bad week was nothing new, but the intrusive thoughts of self harm and suicide whispered rather loudly in my head on this particular day. Randomly chatting with a stranger was a welcomed distraction for my spiraling mind, and luckily a guy from one of those dating apps messaged me.

The conversation flowed easily until he brought up a hypothetical scenario detailing a fantasy of his. TL; DR: He was turned on by the idea of his girlfriend hooking up with other guys. No biggie; I’d had plenty of harmless conversation with guys into weirder stuff. I knew the answer he was chasing, but I wasn’t particularly in the mood to play into his fantasy, so I didn’t respond. I was hoping my lack of response would just change the topic, but he simply didn’t respond. Little did I know that what was to come would simultaneously infuriate and empower me.

He checked in around one in the morning, after he returned home from his second job, apologizing for being too forward and hoping he hadn’t ruined his chances with me. Half asleep, I told him I had been unpacking from a move and had a rough mental health day – the reasons behind my lack of response. (It’s not uncommon for me to disclose that I battle mental illnesses very early on to new people in my life.) He tried to sympathize that having rough weeks and months must be difficult. He then committed a common faux pas, and asked if my depression stemmed from a confidence issue, because he thought I was “very pretty” and seemed “awesome.”

Exhausted and frustrated, I explained that no, it had nothing to do with low self esteem. I have a genuine illness in which my brain does not function as intended. I bid him a good night and fell asleep.

The next morning, he texted me the following: “You’re awesome. Don’t forget.” I honestly don’t remember seeing the text. Regardless, I was busy unpacking and situating myself into my new apartment, and texting a random guy from a dating site wasn’t exactly my top priority.

A day or two passed with no conversation. In today’s increasingly digital, phone-call-fearing world, the phenomenon of “ghosting” runs rampant. This, paired with the fact that mental illness still holds a stigma, left me assuming our interaction had ended there. Lo and be hold, around 9 p.m. on a fairly mundane Saturday (an accomplishment for my anxiety-filled brain), I received the following text: 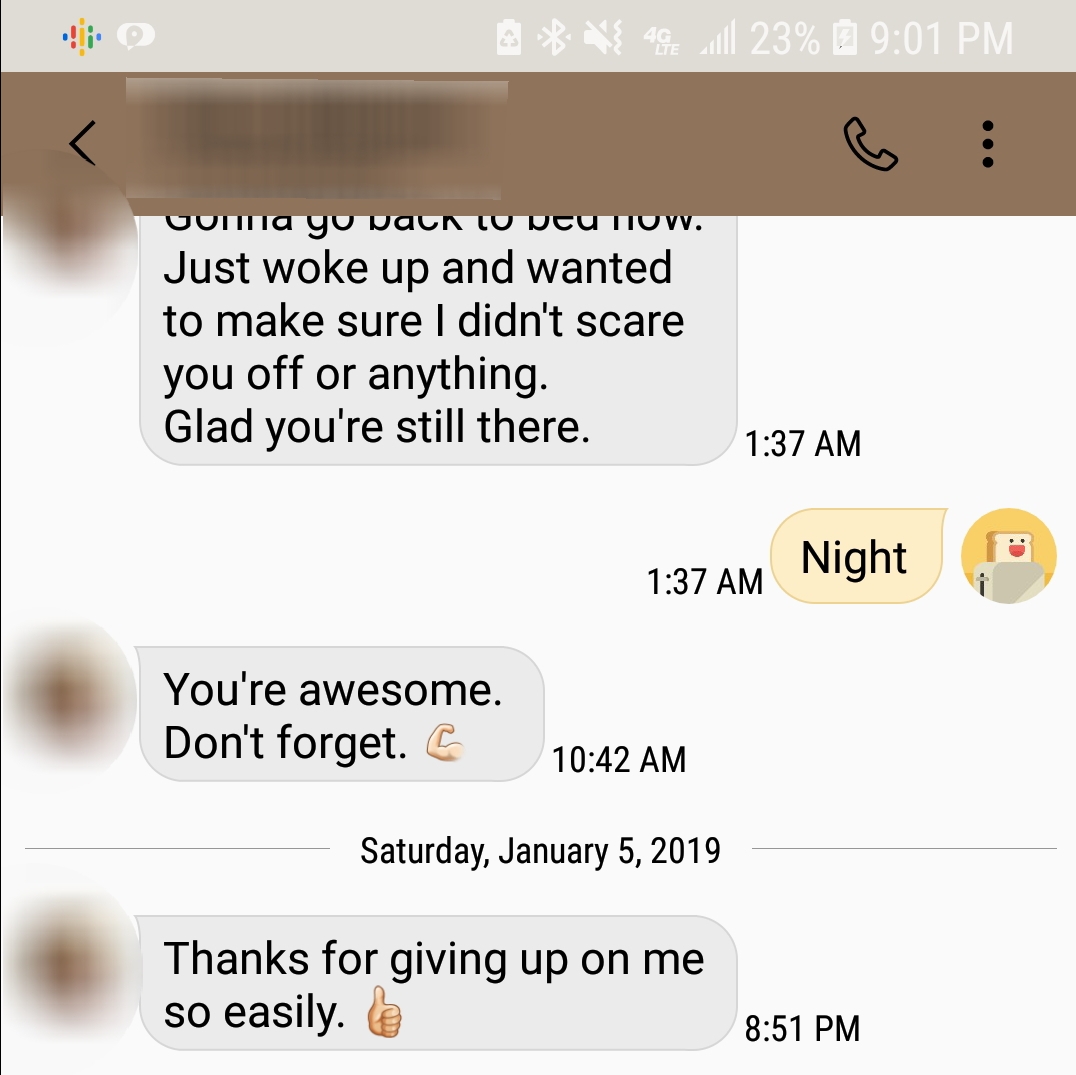 I was livid. How dare you assume I had given up on you because we hadn’t communicated for more than 24 hours? Also, why is the onus on me to initiate communication? It’s not as though the last message I received warranted a response. For one, I didn’t remember getting it. And two, sure, I could have said “thanks” when he told me to remember I was awesome; but in my mind at least, responding in that way would have validated his idea that a simple compliment or self-esteem booster cures a bad day. I am far from the type to allow anyone to believe that a bad day, let alone a depressive episode, can be cured easily or shrugged off as no big deal.

I replied with the following, which reads far more aggressively than my normal texting tone: 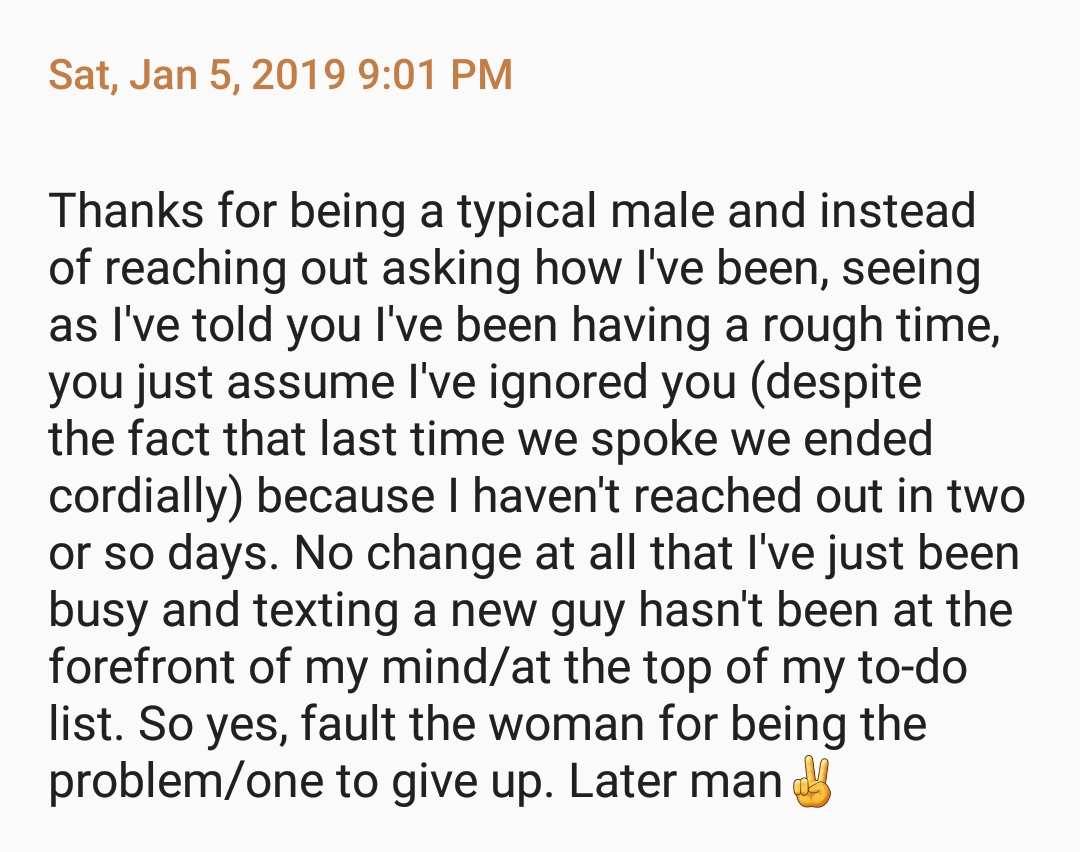 I was shocked. Stunned.

When most people think of the word “disabled,” they think of a person with a physical or intellectual limitation. And of course, those people do have disabilities. As with mental illness, there is a certain stigma attached to the term ”disability.” My goal with this article is not to detract from the battles of those with physical and intellectual disabilities – they indeed fight a different fight than those of us with mental illnesses. The point I’m trying to make is that there is nothing wrong with having a disability.

I believe this man slung “disability” in my face hoping it would hurt me, believing I would identify as such and see myself as being “wrong” in comparison to the general human population. Pardon my French, but that’s pretty fucked up. The condition a person is born with, or acquires somehow throughout their life, is not something to be held against them, nor should it be used to make them feel “other.”

When filling out a job application, I hesitate when it comes to the question of disclosing a disability. I often hover over yes, but ultimately choose the non-disclosure option. Choosing not to disclose feels like a safe space for me. It’s not a lie, but not the full truth either. No, I am not prevented from going about my daily life every day of the year due to my mental illnesses. But yes, there are times when I stay in bed for days at a time because just the idea of existing overwhelms me.

America has made great strides over the past few years at showing more acceptance toward mental illnesses and promoting mental health awareness. However, the fear always lingers that you won’t get the job because you clicked the box marking yourself as disabled. Despite the fact that it’s technically illegal do discriminate based on disability, we all know the system is not perfect and the chance of a potential employer holding your disability status against you remains a real possibility.

A man who wielded the word “disability” against me, who likely hoped that it would sting and upset me, actually empowered me that day. I do have a disability. Although not visible, my disability has existed for most of my life and does affect my life in ways that have impacted my work. I’ve been fortunate enough to be believed when I explain away poor performance as “just having an off day, I guess.” I’ve been able to find places to hide and shed tears quietly in the middle of a work day, calm my red eyes with some ice, and return to my duties as though nothing has happened, with no one the wiser.

From now on, I am going to check that little box disclosing my disability status.

From now on, I am going to own the fact that my invisible mental illnesses do affect my day-to-day life.

From now on, I am going to honor my responsibility to live my life to the best of my ability as a person with a disability.

I have a disability.

But my disability does not define me.

I’m a 30 year old who’s fought depression and anxiety for most of my life. I stumbled upon The Mighty and felt the first article I read so deeply that I’ve kept coming back for more hope and inspiration. I strive to inspire others through my words in hopes that they channel their inspiration into actions against hate and toward breaking the stigma surrounding mental illnesses, invisible illnesses, and disabilities.