So many Disney storylines feature a protagonist who has experienced (and often overcome) trauma, so it’s no wonder trauma survivors often relate to the struggles and triumphs of Disney characters. We wanted to know what Disney characters trauma survivors in our community identify with, so we asked out Mighty community to share their favorites with us. Let us know if you have a favorite that didn’t make the list!

“Maleficent from the live action. She was so in love with someone who cut her wings and she became scorned. The same happened to me, and I spent a year in rage and spite.” — Stephanie P.

“Maleficent in the new namesake movie. I was raped a year ago and watching her wake up with her wings gone still throws me into a weeping fit. It’s still a horrific and very lonely feeling knowing my essence was stolen from me. I struggle with it still daily. But then seeing her become this powerful, closed off and unafraid badass gives me a sense of inspiration. Maybe one day I’ll be willing to consider sharing my time and emotions with someone but for now, I don’t feel bad one bit for gathering my thorns around me and flexing my power to protect myself.” — Stefanie K.

“Elsa… she locked herself up in a frozen tower after losing control and freezing a whole bunch of things… She isolated.” — Ceilidh W.

“On a deep level I connect with Elsa. The having to hide her true self, feeling cut off, then running away from it all and finally feeling free — I understand her on so many levels. The fear of hurting those you love, the isolation and wanting to be free even if it means being alone.” — Stephanie R.

3. Quasimodo from “The Hunchback of Notre Dame”

“Quasimodo. People immediately see the things they don’t like and assume that’s all there is to me. It’s easier to just hide away in my bell tower than it is to try to show that I’m human to a callous crowd that couldn’t care less.” — Robbi C.

“Quasimodo. I’ve been looked at as a freak and an outlet for hate for a long time. I’ve always felt like the odd one out/third wheel of every friendship I make. I also see my seclusion from life because of the symptoms from my trauma in him. Making friends with people that aren’t there.” — Aiden S.

“Merida, when she takes off her cape and said, ‘I’m Merida and I’ll be shooting for my own hand!’ It was so empowering to see that kind of fighting back. Even though her situation was different, hearing and seeing her take her power and voice into her own hands like that was huge for me.” — Bethany D.

“Stitch from ‘Lilo & Stitch.’ It has always been hard for me to adjust to new situations and new people. In foster care, it was difficult for me to become comfortable and trust each new home knowing they could possibly kick me out for the simplest reasons. I would do everything they wanted just to try to stay there as long as possible. I still do this to this day, eight-plus years later.” — Maggie M.

“Stitch from ‘Lilo & Stitch,’ I never felt like I belonged to my biological family or really in this world. I can remember desperately wanting to have been adopted by them instead of born to them because then there would be another family out there somewhere for me. At 15, I started finding people to be part of my chosen family and now 11 years later, I have a great family — it’s little and we’re all somewhat ‘broken.’ but it’s still good. Stitch made me feel like I wasn’t alone and would someday find where I belonged.” — Jayden R.

“Stitch. He was made to destroy, created for hate. But when he was shown another way, he realized he did not have to be the way he was told to be, he could be what he wanted.” — Leigh S.

“Pocahontas. When I was a kid going through things, I always pretended to be her. I have always found peace in nature, so I dreamed of living like she did.” — Apryl T.

7. Sadness from “Inside Out”

“Sadness from ‘Inside Out.’ I love this film. It helped me understand the things I did/do.” — Jemma V.

“Cinderella. She was abused by many and got through it basically by herself and with pets. The man was really an afterthought and she was smart enough to let him chase her. Also she didn’t have a whole lot of material things, but managed to be happy anyway.” — Dana P.

“Easy! Cinderella. My stepmom was not such a nice person. Not as bad as Cinderella’s, but not nice. And then my prince rescued me (a.k.a. my husband) who has been the best thing that ever happened to me.” — Tami G.

“Hearing Princess Jasmine say, ‘I am not a prize to be won.’ To have her stand up for herself, rather than letting her dad decide what happens to her along the way, stood out in my heart. She was able to speak up for herself, even at a young age, regardless what her dad kept telling her.” — Tatauq M.

10. Ariel from “The Little Mermaid”

“Ariel from ‘The Little Mermaid.’ She wants legs, wants to be part of a different world. In the way I wanted to reconnect to the world in recovery from trauma. Once she has legs, her voice is taken. She still can’t fit in. In the way that we hide behind smiles and ‘I’m OKs,’ she tries though as we all do in recovery.” — Isabel M.

“Ariel from ‘The Little Mermaid.’ My voice had been taken away in order to purse my dreams.” — Tiffany B.

“Mowgli. He was out there all alone, but made his own way with his chosen family.” — Heather K.

12. Belle from “Beauty and the Beast”

“Belle, not because I am also an avid book reader, but because I have always felt there is something much more for me out there than what I have here and because of that, it made me an outsider.” — Kaylynn P.

“Rapunzel. I thought the only good thing about myself was a physical thing. She treasured her hair because of what her ‘mother’ told her — just like I treasured my appearance and being thin because of what people told me.” — Lizzy H.

“Rapunzel from ‘Tangled.’ My childhood felt just as trapped as she felt in her tower suffering from emotional abuse (and physical in my case) and when she escaped, she still had all these challenges to face but never gave up on her dream to see the lanterns. For me the lanterns represent the light at the end of the tunnel that saved me from a dark place. It wasn’t easy, but it was worth it.” — Fatima T.

“Way too many… but I’d have to say Jim Hawkins from ‘Treasure Planet.’ I’ve been abandoned and pushed down all my life, making it feel like I was never bound for anything in my life and no one ever believed I could do any better or be any better. But there’s always someone out there who believes in you — you just have to fight for what you want and what’s right. And against all odds, you’re worth something.” — Aiden S.

“I relate to Eeyore from ‘Winnie the Pooh.’ The reason for this is because I have mild depression from my past trauma. But my friends and family try to help by including me in everything.” — Carlene R.

“Mulan. She taught me that through adversity, I could still stand up and be strong. Even when everything around me was crashing [down].” — Carrie C.

“Moana’s father. Can’t tell you how happy I was to see the depiction of a friend dying when every other movie would have made it his father. My best friend died when I was very young and grieving that relationship is often disenfranchised. In Moana, it was good to see how affected her father was by his friend’s death and how protective it made him of his other loved ones.” — Mannette E.

“I feel like I’m Tinker Bell — constantly angry, jealous at times, with a huge attitude, not trusting of new people, but I’m also sweet and caring to those closest to me and those who I think love me. It’s so weird.” — Victoria E.

19. Alice from “Alice in Wonderland”

“Alice in Wonderland. ‘I’m not crazy, my reality is just different than yours’ and ‘Imagination is the only weapon in the war against reality’ plus many other quotes from this. I can really relate to how she feels in a strange world.” — Jo J.

Want to join the conversation? Answer our featured Question below. 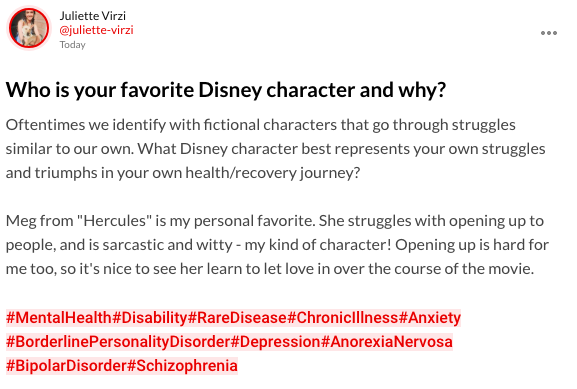 Join the conversation by replying here.