Here's What You Should Know About the Top 10 Antidepressants

When you’re first prescribed a new antidepressant for your mental health, you probably want to know more about what you can expect. What are the side effects? How will I know if it’s working? Or, after taking it for a few days, is my experience normal? You should always talk with your doctor before stopping or starting a medication or if you’re concerned about changes in your symptoms.

Like many people though, you might turn to the internet first to find out more — has anybody else felt this way while taking the medication? With enough digging, you can usually find the listed side effects for any medication, but not what it feels like from people who’ve been there. While every antidepressant works differently for everyone, knowing you’re not alone in your experience can be helpful.

There are many types of antidepressants, and none of them work the same for everyone. Sometimes you and your doctor will work to find a balance between an antidepressant that helps you feel better and its side effects and potential risks. The answer will be different for everyone, so knowing a little about what others experience can help when you next talk to your psychiatrist.

“We have 29 FDA approved antidepressants all with different mechanisms of action. Some are quite similar, some are quite different,” psychiatrist John J. Miller, MD, told The Mighty. “There’s always risks to the benefits and that’s why it should be an ongoing collaboration between the patient and the prescriber.”

Medication likely won’t be the only aspect of your mental health treatment, but if you and your doctor decide it’s right for you, it’s helpful to know what you might expect. That’s why we’ve rounded up 10 of the most commonly prescribed antidepressants so you can easily see what the drug is supposed to do, potential side effects and most importantly, other people’s experience taking each antidepressant. Because your voice is important, you can vote and let others know your experience taking any of these medications.

A few notes before we get started:

What to Know About Side Effects for All Antidepressants

And don’t forget to talk with your doctor before stopping your antidepressants or if you have any questions or concerns about your medication. 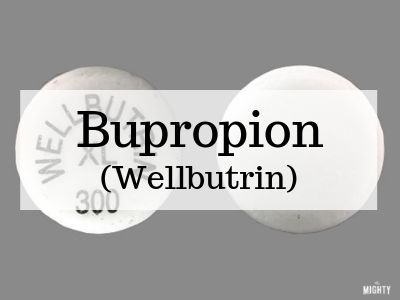 Bupropion (brand name Wellbutrin) is FDA-approved for depression and seasonal affective disorder (SAD). Notably, many report bupropion has fewer sexual side effects and less weight gain than other antidepressants. Bupropion comes in three different forms, including immediate, extended and sustained-release pills. It’s also available under the brand name Zyban, which is approved for helping you quit smoking.

Tried Wellbutrin and it was a horrible experience. Horrible anxiety attacks, thoughts of self-harm (something I had never had before that), increased sick time at work etc. I got off it as fast as I could. — Christy M. 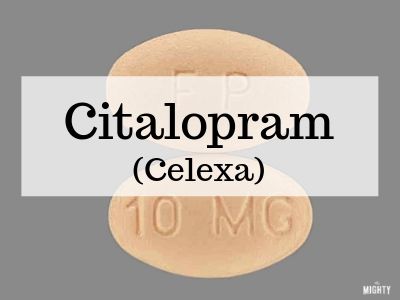 Approved for treating depression, Citalopram (brand name Celexa) is a selective serotonin reuptake inhibitor (SSRI), meaning it largely works to increase the amount of the “feel-good” chemical serotonin in your brain. It’s available in both tablet and liquid form.

Citalopram has worked well for me. In the beginning months I experienced heightened anxiety … and very mild nausea. Those side effects went away after 1 month. It took some adjusting to find the right dose. — Megan S.

First I took citalopram for PTSD/anxiety/panic disorder. It didn’t do very much except make me worse at times. — Annie-France B. 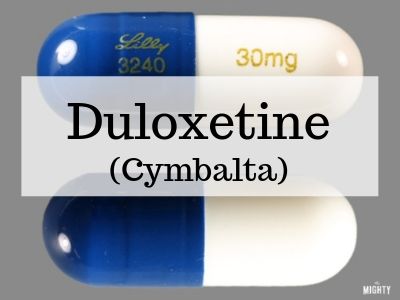 Approved for treating depression and fibromyalgia symptoms, duloxetine (brand name Cymbalta) is a newer class of antidepressants called a selective serotonin and norepinephrine reuptake inhibitor (SNRI), which also increases the amount of norepinephrine (in addition to serotonin) available in your brain, another type of neurotransmitter and hormone that can boost your mood. Duloxetine comes in extended-release pill form.

I have now been on Cymbalta for 6 weeks and I’m feeling so much better. I’m in less mental distress as well as less physical pain. I’m happy with my medication regimen at this time. — Sara M.

I’ve been on a few now since my chronic illness triggered depression. Cymbalta was actually great for me but exacerbated my POTS. — Julie G. 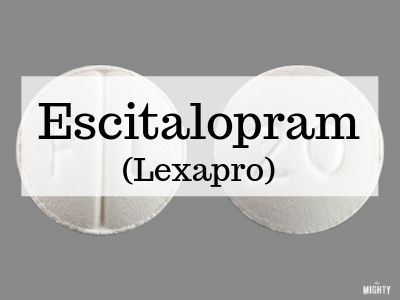 Escitalopram (brand name Lexapro) is one of the top 35 most-prescribed medications in the United States as of 2018. It’s commonly used to treat depression and is also FDA-approved for generalized anxiety disorder. This SSRI is available as tablets or a liquid.

I’ve been on Lexapro for just about 2 weeks, still working up to the therapeutic dose but I’ve seen a little improvement which is great and luckily nothing too crazy with side effects that went away after the first few days. — Keighley Schofield

I am now on Lexapro and I’m happy to say that it ended up being a godsend for me. At the beginning, I had some crazy side effects (excessive night sweats, overactive bladder, vivid nightmares, vertigo, nausea, sleepiness during the day, and insomnia during the night) which only lasted about two weeks and then I was fine. — Mackenzie S. 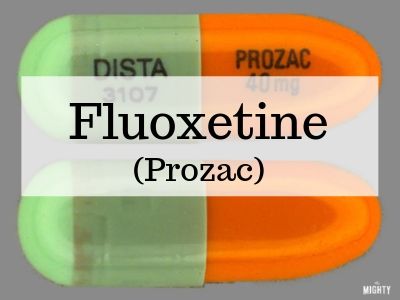 I started with Prozac when I was a teen for anxiety and depression, and it worked well. But in my early 20’s I felt it wasn’t working as well so I switched. — Christy M.

As a teen I took Prozac and it gave me horrible realistic nightmares. — Candy K.

Prozac – ineffective at low dose, higher does made me too dizzy to sit up. — Kat W.

I took Prozac while I was trying to find a medication that worked well for me and it caused irritability along with a higher sex drive and … mood swings. — Elizabeth S. 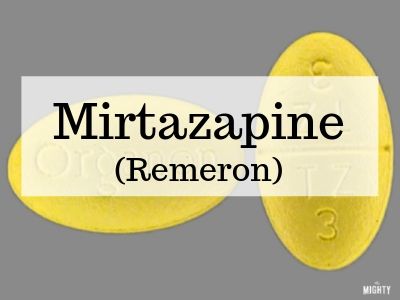 Some research shows mirtazapine (brand name Remeron) might get you relief faster than other SSRI or SNRI antidepressants because it works differently. Mirtazapine is a noradrenergic and specific serotonergic antidepressant (NaSSA) that acts as a presynaptic alpha2C-antagonist and blocks serotonin receptors. This means the drug helps your norepinephrine alpha2C autoreceptors release the mood-boosting chemical norepinephrine and enhance your serotonin. It’s available in tablet form or a dissolving tablet.

Currently trying Remeron, but it’s keeping me from feeling any intense emotions, both happy and sad. Really strange dreams too. — Vicki D.

I’ve been taking mirtazapine for no longer than 4 months – gained 60lbs, was an absolute zombie, but slept better. Wasn’t worth it at all. — Anki L.

Remeron: Ate all the food in the kitchen. — Carmel Y. 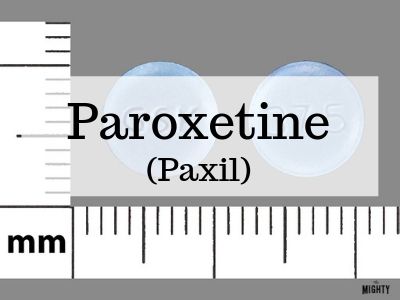 I was on Paxil for about 3 years until it stopped working. — Vicki T.

I started out on Paxil. The first few weeks (3 or so) were a little rough from the side effects. They included being sleepy all the time, feeling like I was in a fog and more anxious than usual. After being on it for a while I began to notice that my body was forming an immune response and it was no longer helpful for me. — Sara M. 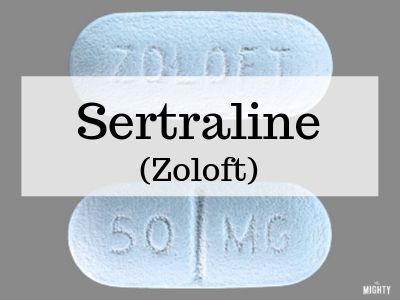 Sertraline (brand name Zoloft) is the most commonly prescribed antidepressant in the U.S., and the 14th most common drug prescribed overall in 2018. It’s an SSRI that can help if you live with conditions such as depression, PTSD, OCD, panic disorder, social anxiety and PMDD. Your doctor can prescribe it in tablet or liquid form.

I am currently taking Zoloft and it’s been wonderful! I haven’t noticed any side effects besides nausea (but that’s only if I take it on an empty stomach). — Jess F.

I currently take sertraline (Zoloft) the first few weeks were tough with headaches and being tired all the time. Then it kind of leveled out. I occasionally get really bad migraines though but my mood is much better. — Sarah B.

I’ve been taking Zoloft for 11 days after trying three or four other antidepressants over five years. The side effects from taking this medication have been the worst I’ve ever had. Continuous nausea that has made it very difficult for me to eat or drink anything. — Katie S. 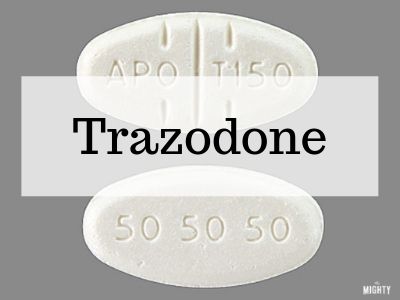 Trazodone, first approved by the FDA in 1987 for depression, is a serotonin receptor antagonist and reuptake inhibitor (SARI). Some researchers believe it’s less prone to stop working after a few years of taking it, which happens for many people who take SSRIs and SNRIs. Trazodone may also have a lower risk of triggering psychosis in those diagnosed with schizophrenia or schizoaffective disorder. Trazodone is available as a generic medication from a variety of manufacturers, most commonly in tablet form. It is also the most common medication prescribed in the U.S. to treat insomnia (which is “off label”).

Trazodone – knocked me out cold and did nothing for anxiety/depression symptoms. Increased dosage made me suicidal. — Kat W. 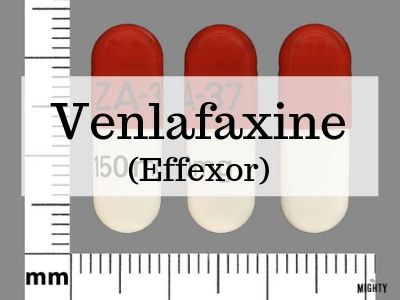 Venlafaxine (brand name Effexor) is an SNRI. It may help you feel better if you live with depression, social anxiety disorder or panic disorder. It’s available in pill or tablet form. Some people have reported difficulty with unpleasant symptoms of withdrawal while taking venlafaxine, even after missing only one dose, so be sure to ask your doctor about its antidepressant discontinuation syndrome effects if you’re prescribed venlafaxine.

Effexor: Very effective for mood regulation and depression, but had intense cravings for sweets and carbs. — Carmel Y.

Effexor is what I take now and I can honestly say it really does help but it causes some weird side effects like skin picking and hair picking. — Valerie C.

If you take Effexor, be prepared for withdrawals if you miss taking a pill even by a couple hours. — Nicole B.

Effexor for depression and anxiety for about 2 years. The last ten months I started getting really really bad night sweats. … The first year the drug really helped with depression but weening off of them was one of the hardest times ever. I lowered the dosage slowly, did everything my Dr said and was extremely sick for a couple months getting off of them. — Sierra D.

If you have any questions about your antidepressants, reach out to your doctor. Part of their job is to make sure you know what medications you’re taking, why and the potential risks and benefits. Advocate for yourself if you’re having a hard time getting answers, and talk to your psychiatrist before making any changes to your medications and if you experience side effects or changes in your symptoms.

“There’s always risks to the benefits and that’s why it should be an ongoing collaboration between the patient and the prescriber,” Dr. Miller said. “Any good clinician, what they should be doing with every patient, with every medicine, is informing them about the risks, benefits, side effects, long-term risks and what the patient’s goals are. And then depending upon the diagnosis and the history, creating a personal treatment plan that’s always a work in progress.”

Have you taken any of the above antidepressants? Let others in The Mighty community know how helpful you found the medications by completing the anonymous survey below.