On Tuesday, Roseanne Barr’s racist tweet about former president Barack Obama’s adviser Valerie Jarrett led to ABC canceling her comedy “Roseanne.” Hours later, Barr tweeted that she made a mistake and was “Ambien-tweeting.”

Barr’s tweet sparked major backlash from others on social media, but one celebrity came to her defense. On Wednesday, Jimmy Kimmel, host of ABC’s “Jimmy Kimmel Live,” tweeted, “angrily attacking a woman who is obviously not well does no good for anyone. Please take a breath and remember that mental health issues are real.” 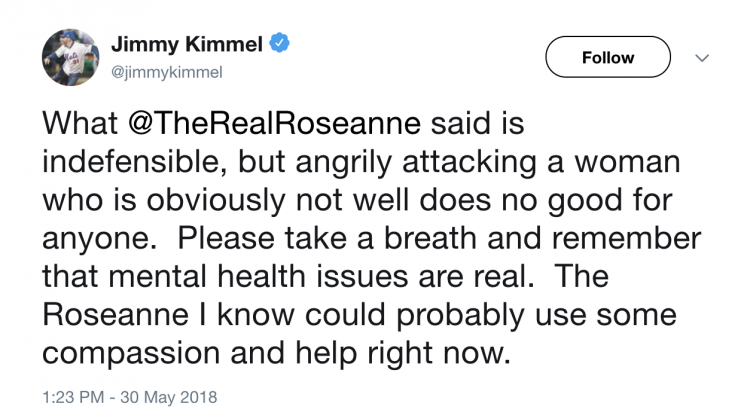 Jimmy, we can’t just go around labeling everyone that says outrageous and/or racist things “mentally ill”. By doing that, we are doing a disservice to those who actually suffer. Mental illness doesn’t make you racist. I won’t hear it.

Come on, Jimmy. Don’t play the pity card, she has a long history of similar tweets. Mental illness doesn’t cause or excuse racism.

What she said is indefensible but you’re going to defend her anyway? Mental illness, if that’s what this is, does not excuse racism. It is not synonymous with racism. And critique is not attack.

A person can be both mentally ill and … shitty. There’s no mental illness that makes you racist.

While few psychiatrists think that extreme racism could be a form of mental illness, this claim is not backed up by the American Psychiatric Association. Racism is a social problem that can harm the mental health of those targeted, according to the APA. It can lead to issues such as post-traumatic stress disorder, depression and anxiety.